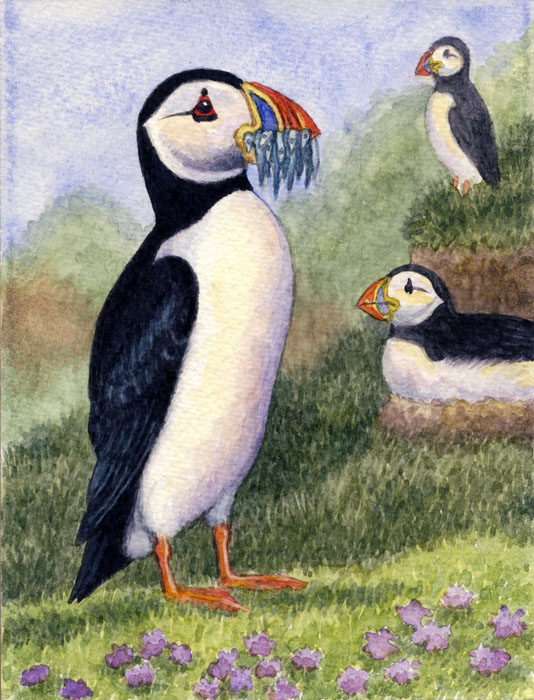 This time I bring you birds that are everybody's favourites – Atlantic Puffins, Fratercula arctica! The scientific name means 'Friar of the Arctic', alluding to their resemblance to tiny monks. These funny little birds belong to the Alcidae, the Auk family. They are typical of the colder parts around the North Atlantic Ocean, breeding in the British Isles, Iceland, Greenland, and the coasts of Norway and the Newfoundland region of North America, as far down as Maine. A typical puffin has a total length of about 30 cm/12" and stands about 20 cm/8" tall. Both the male and the female have brilliantly coloured bills – at least in the breeding season. They grow brightly coloured sheaths on the bill, which are shed at the end of the breeding season. Non-breeding puffins, and juveniles, are much more soberly coloured, with smaller, duller bills and darker faces. In Afrikaans we call them 'Papegaaiduikers' or 'Parrot Divers'. There are two other puffin species, the Horned and Tufted Puffins, of the Pacific Ocean; the Rhinoceros Auklet is a very close relative.


Penguins of the North

The auk family is the ecological replacement, in northern waters, of the penguins which are characteristic of the cold oceans around Antarctica and the southern coasts of South America, Africa and Australia. Unlike penguins, living auk species can still fly, but their wings have become much reduced. This enables them to swim well underwater, using their wings in a half-folded position while energetically moving them up and down. In essence, they are 'flying' underwater. Too-large wings would create too much drag in the water; their wings are about at the limit of the size they can be to be effective both in the water and in the air. Flying puffins and other auks need to beat their small wings very rapidly to stay aloft. They'll often patter over the water, using their webbed feet, to gain speed for taking of. On land they usually use sea cliffs and tall rocks to launch themselves off.


Auks have short legs set well back on their bodies, which is why on land they stand and walk with a very upright posture. This, too, is similar to penguins. They don't use their webbed feet for swimming when they're submerged, but for steering. For this purpose, the feet being at the back of their bodies, like the rudder on a boat, works well. They do paddle with their feet when they're drifting on top of the waves. They spend much of their lives bobbing on the ocean surface like that, diving down from time to time to catch the fish they feed on. They have glands secreting an oil which they spread over themselves as they preen, making their feathers waterproof. They have a dense down that keeps their small bodies warm in the cold. Their black and white plumage (in the puffin and in most auks) is also for camouflage. Predators like sharks or seals see the bright belly of the puffin coming from below, which blends into the sunlight striking the ocean surface; from above, predatory birds like skuas may miss the dark upper surface of the birds against the shadows on the waves. This is the same for penguins, explaining the similarity of their 'formal wear'.


Apart from being able to fly, auks are also smaller than penguins: the largest living auk is smaller than the smallest living penguin species. But there used to be a penguin-sized auk, which also was entirely flightless. This was the Great Auk, Alca impennis. A fairly close relative of the living Razorbill, it was much larger, up to 76 cm/30" in overall length, with a much bigger bill as well. This species lived in the northern Atlantic Ocean, much like the present-day puffins, but its flightlessness made it vulnerable to humans and it was hunted to extinction in the nineteenth Century. The great auk was so penguin-like that it was actually the original penguin! The name 'penguin' or 'pinguin' was first used for the Great Auk, and then applied to the very similar birds the first explorers of the southern oceans found. So it is ironic and tragic that this species is now extinct and bequeathed its name second-hand to the penguins.

Puffins actually spend the majority of their lives far from land. They cruise the oceans, flying or paddling about, sleeping and roosting on the waves. They even moult their flight feathers while at sea, leaving them quite flightless for a month or two, but still able to swim. This too is when they are duller in plumage. But when the breeding season comes around, they change their ways! They get their nifty breeding plumage and bright bill sheaths, and move to the land. They will choose islands just offshore, or tall cliffs at the margins of continents or large islands like those of Britain. On small islands mammalian predators like foxes are often absent; if predators are present, the puffins will choose high cliffs that are difficult to get to, where they'll also enjoy relative safety.


While some cliff-nesters have their nests out in the open, puffins prefer to nest in burrows. They'll sometimes take over unused rabbit burrows, but also do much digging themselves. They can quite undermine the ground surface in some places, and occasionally will lose suitable territory form the soil erosion they induce.


While puffins will conspicuously perch and pose at their breeding sites, they actually still prefer to roost at sea, and will fly down and out at the end of each day, sleeping on the waves and being ready for feeding when morning comes. But at the nests the male and female take time to strengthen their bonds. They work together at excavating and furnishing the burrow, and will also pose and 'bill' together. This is a ritual display where they stand facing each other, turning their heads from side to side to show off the impressive bills. They also do 'fencing' with their bills, rapidly touching them together and producing a rattling sound. It is clear that the bright colours on the bill constitute an important element of these 'sexy' displays.


Male and female puffins are monogamous, pairing up for life. They share the duty of incubating the (typically) single egg and caring for the chick, but the female typically gives it a bit more attention while the male will make a point of guarding the nest. The chick, like many in the order, is hatched with open eyes and covered in down. The parents bring it small fish and it grows rapidly. You'll see in my picture how the fish (in this case, sand eels) are crammed into the puffin's bill. How does it do that? How can it have one fish in its bill and then catch another fish without losing the first fish? It is using its grooved tongue to hold the fish it already has in its bill, when it opens its mouth to catch more fish. When it has a 'full bill' it returns to the nest site to feed the chick.

While being solitary at sea, puffins are extremely social at their nesting sites. They breed in large colonies, the largest being on Iceland, where about five million pairs breed each year. Breeding sites are traditional; puffins only breed where other puffins are already present. This created a challenge when biologists wanted to reintroduce puffins to Eastern Egg Rock Island in the gulf of Maine, which they had disappeared from in the late nineteenth century. They translocated young puffins to burrows they made specially for them – since puffin chicks note the nests they depart from when fledging and setting out to sea, returning only some years later. The puffin chicks thus set out from the new nests on Eastern Egg Rock – but would they return and breed? To entice them to return and to fool them into thinking the site was already established, the biologist made fake puffins – decoy birds like those used in duck hunting, but this time to reassure the returning puffins that the region was safe and popular. They stood their bird decoys all over the place. They also placed mirrors in strategic positions so the puffins would see reflections of themselves and others, giving the impression the colony was much more populous than it was. They also played recordings of puffin calls to make the place suitably noisy. It worked! There are now about 150 nesting pairs on the island. This shows how we can use similar tricks to re-establish colonies for this and other species of birds.

With such large breeding colonies still existing around the northern waters, puffins are currently numerous and relatively safe. They are popular birds with humans, colourful and character-full. They're used to represent the province of Labrador and Newfoundland of Canada. Their image occurs on many stamps. 'Puffin Books' is the junior version of 'Penguin Books', with the little puffin being quite appropriate as a symbol. Areas where puffins breed are popular with tourists – who need to be cautioned though not to disturb the birds.


In a few regions, puffins are still hunted for food by locals. This is unlikely to make much of a dent in their populations, but still needs to be watched. The greatest challenge they face is likely due to climate change, which can have major effects on the distribution and availability of their favourite food fish. Puffins are also vulnerable to oceanic pollution. They can be used as an 'indicator' species, the presence and health of which is a sign and reflection of the ecological health of the northern oceans themselves.