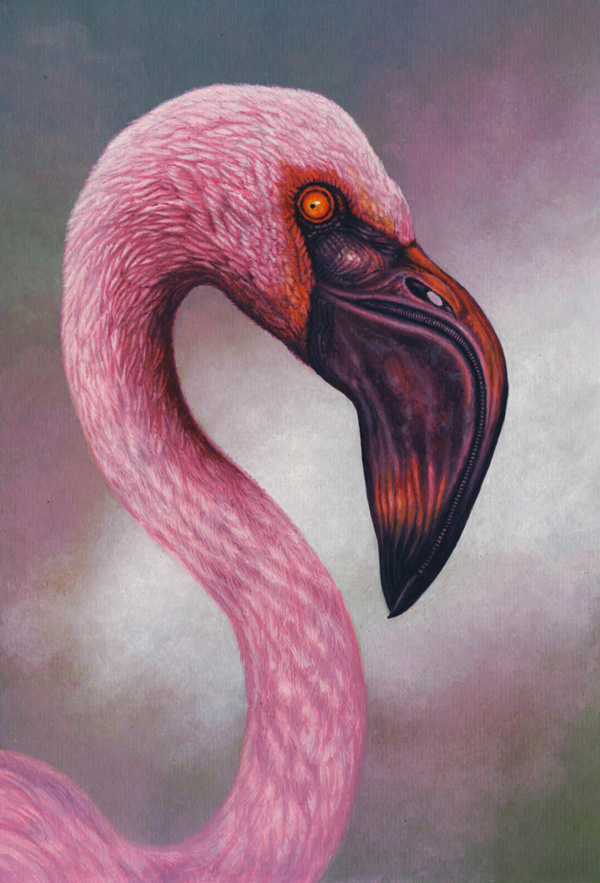 Here is another species of Flamingo, the Lesser Flamingo, Phoeniconaias minor. In Africa, this species occurs often alongside the greater. It can easily be told from that species, being much smaller, as well as darker, with a deep red, black-tipped bill. It reaches an overall length of 105 cm/41" and a weight of 2.7 kg/6 lbs. It only occurs in sub-Saharan Africa, Madagascar, and a small region of India and Pakistan. It is restricted to large, shallow lakes and coastal lagoons. In fact, it targets some lakes the waters of which are so alkaline that no other birds can tolerate it. Being the only bird species that can feed there, they enjoy freedom from competition. In some of the lakes in the East African rift valley, they can occur in their millions, looking from a high-flying plane like a pink border around the lake.


The lesser flamingo avoids competition with the greater by targeting a different source of food. The greater eats mainly small aquatic critters such as shrimps and other crustaceans, tiny snails and other molluscs, worms and insect larvae that occur in the water and also in the mud. To get at these, it often completely submerges its head in the water, often down to the muddy lake bottom. The lesser flamingo feeds instead on tiny diatoms and blue-green algae, such as Spirulina (the same which sometimes is sold as a wonder health-food to humans). It needs still water to feed in; if there's wind disturbing the lake surface, the lesser flamingos will stand along the shoreline waiting for it to quiet down. It frequently feeds at night.


The lesser flamingo's bill only allows tiny particles to enter as it feeds. The outer lamellae (bristle-like structures) only allow entry to particles of less than a millimetre in diameter to enter the bill, while the inner ones have gaps of only a twentieth to a hundredth of a millimetre. It feeds mostly at the water surface, with its bill 3-6 cm/one or two inches into the water. It sweeps its head from side to side as it slowly walks forward. Using its tongue, it pumps water in and out of its bill at a rate of twenty times per second. The inner lamellae keep the small algae particles behind, which it then swallows, expelling the water. In spite of the algae being blue-green, they also contain the pigments that give the lesser flamingo (as with other flamingos) its pink colours.


While able to feed in caustic waters, lesser flamingos still need fresher water for drinking and bathing. They find this at the river inflows to the lakes, or even at volcanic hot springs.


This is the most numerous flamingo today and also the most gregarious. The birds often join together in mass displays, similar to that of the greater flamingo. On the edges of the flocks, birds will raise and lower their wings, like a salute. In the middle, the birds march in the same direction while tuning their heads from side to side, or bend their necks backward and turn their heads and make as if they're preening themselves. Their voice is a honk similar to that of the greater flamingo.


Lesser flamingo breed rather unpredictably. In the hot tropics where they occur, they're not much concerned with the temperature, but rather with the water levels of their feeding lakes. They'll breed whenever conditions are just right. In Southern Africa, this tends to be the dry season, actually, when waters are receding, the aquatic algae gets concentrated and lots of mud is exposed. They use this to make their tall nest mounds, on top of which each female flamingo lays a single egg. As with the greater flamingo, they feed the chick at first on a liquid secretion containing some of their own blood as well as fats and sugars. At the age of four days, the flamingo chicks leave their nests and join together into huge 'crèches'. A few adults will stay to oversee the lot of them and lead them to fresh drinking water. They fledge at the age of 70-75 days.


The lakes the lesser flamingos feed on, are often so alkaline that their waters can't be used for drinking or irrigation. This makes the flamingos fairly secure, since people mostly leave the lakes and them alone. Their largest population occurs on Lake Natron, a soda lake, in northern Tanzania. But this lake is targeted by a company that wants to extract soda ash; this might disturb the flamingos at their feeding and breeding. They only breed at a few other sites; these may not be suitable for breeding every year. In Southern Africa, they mainly breed at Etosha Pan in Namibia, Sua Pan in Botswana, and at Kamfers Dam, Kimberley, in South Africa. At the latter site, they're now threatened by pollution and encroaching development. But there they're also the subject of a quite intensive project of monitoring and the captive-rearing of abandoned chicks. Overall, lesser flamingoes are always at the mercy of the climate, mainly adequate rainfall, and increasing aridification in Africa might cause the drying up of some of their feeding lakes. Despite the fact that these birds still number many millions, the very precise requirements they have render them vulnerable, and they need meticulous monitoring and conservation measures.