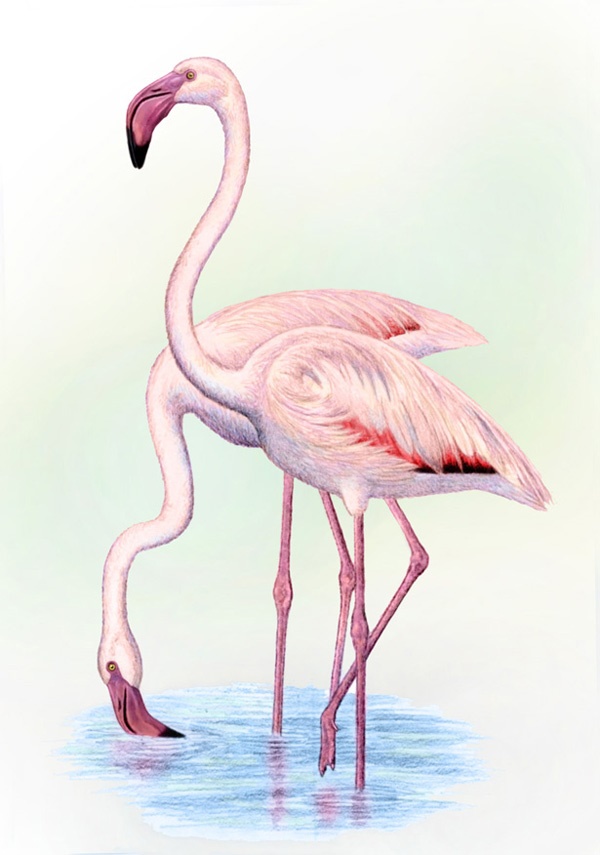 Time for another spectacular bird species! This is the Greater Flamingo, Phoenicopterus roseus. It is a very widespread bird: it occurs over much of Africa, and also in southern Europe and Asia. It is sometimes included in the same species as The Caribbean Flamingo, the brightest pink-red of all the flamingos. The greater flamingo proper is not very bright pink, its plumage ranging from mostly white to light pink. It has more intense pink colouring on its wing feathers, as well as black flight feathers, but this is mostly concealed when the wing is folded. It can reach 5'/153 cm in height. In Africa, greater flamingos are found in and around large bodies of water, often occurring in very large colonies. They can be found at inland lakes and also along the coast, being able to feed from brackish as well as salt water. In South Africa, they are found along the east and west coast, and at a few inland localities. Their numbers fluctuate a lot from year to year; some years they are scarce but sometimes and in some places they occur in enormous, awe-inspiring congregations.


The Bird with the Upside-Down Smile

The most notable features of flamingos are their very long necks and legs, and their uniquely shaped bills. These bills, with their downward curvature, are highly specialized for feeding. They have fine, comb-like bristles inside them called lamellae. Flamingos feed with their heads downward, rapidly pumping water through their bills using their tongues and throats. The fine lamellae in their bills work as a sieve, letting the water go through but filtering out the flamingo's food items, which are then swallowed. For the greater flamingo, these are mainly small invertebrate creatures inhabiting the water and the mud. (The other flamingo in Africa, the lesser, feeds on aquatic blue-green algae, and so the two species can occur together without competing with each other.) They typically feed while walking along in shallow water, using their webbed feet to stir up the mud so they can filter out the little critters. They can also swim like ducks in deeper water. In these cases, they will dip their heads and necks all the way into the water since the little animals they feed on live along the bottom of the lakes and pans.

These birds seem to know how elegant they are! As the breeding season arrives, their pink colours deepen. They have elaborate courtship displays. This, too, is a much more social affair than in most other birds. A group of several males will start, making loud, goose-like honking noises, which will attract the attention of a group of females, who will then join them in the display. They wave their heads from side to side like flags; they straighten up and point their bills to the sky; they flick their wings open briefly like a quick salute, flashing the red and black wing feathers; they bend their necks backward and twist their heads as if they're preening their wing fathers; then they bend forwards and lower their heads and open their wings again, raising them over their backs to display the bright red wing coverts.


The end-point of all of this displaying is mating. Individual males and females pair up and leave the displaying group. The male holds his head like a crook over the females back, and then jumps on her. She holds on to his leg with her wings while he's busy. Mating happens on dry land or in the water.


Flamingo nesting colonies are typically in barren, inaccessible, inhospitable regions. The lakes where they feed and breed are often devoid of animal life other than themselves and the small invertebrates they feed upon. Ideal sites are the great salty lakes and pans in the middle of desert regions, such as Lake Etosha of Namibia and Lake Makgadikgadi in Botswana. These are often entirely dry except in years of unusual rainfall, the flamingos making use of these occasions to raise very large numbers of chicks. But the unpredictability of favourable environmental conditions means that often, very large numbers of eggs and chicks may be lost, also. To compensate for the fact that breeding success in any year is by no means guaranteed, greater flamingos are long-lived, reaching an age of fifty years, giving each couple the chance of many breeding attempts.


Flamingos typically build their nests from mud, stacking it into tall, conical platforms. They can be lower, though, and sometimes, such as on a rocky soil, the nests may be rudimentary, just a low pile with a hollow in the middle. In the very hot, desert environment of Etosha or Makgadikgadi, the nest is piled up very high, as a measure of temperature control. At ground level, the soil can be extremely hot. Higher up, it's cooler, and also the great surface area of the tall structure made of mud means there's a lot of evaporation around it, cooling it down further. All in all, the nesting hollow at the top can be from 2 to 8 degrees Centigrade cooler than the surrounding land area.


In large colonies, the nests are spaced apart the right distance that neighbouring flamingo couples won't interfere with each other. They tend to be peaceful and tolerant, but if one flamingo comes too close to another on its nest, the latter will display by raising its back feathers. Nesting birds tend to be jittery and wary and humans can't come closer than about 300 m/yards to them without risking upsetting the entire colony.


In the nest, the flamingo female lays a single egg, rarely two. The mom and dad both incubate it. Before settling on the nest, they shake their legs to remove mud from them, which, if it should cake and cover the egg, would make it hard for the chick to hatch. They actually perform the leg-shake even if they're not nesting in a very muddy situation!


The newly hatched chick is covered in greyish down and has much shorter legs, comparatively, than its parents. Its feedings consist of a liquid that the parents form using glands in their upper digestive tract, containing some of their own blood, as well as fat and glucose, which they regurgitate into its bill. This is very nutritious and the chick grows rapidly, and is able to leave the nest at the age of a few days. It will first peck up bits of eggshell around the nest, the calcium of the shell helping it to build long and strong leg bones. Then the chick will join other chicks to form a crèche, sometimes numbering thousands of youngsters. These stay close together for safety, marching around the breeding grounds, and sometimes disturbing adults that are still incubating. The crèche youngsters still need feeding themselves, and each individual knows the voice of its own parents, and will run off to them to be fed if they call to it.


As I've said, there are environmental tragedies that can befall these chicks. Sometimes the very rain the flamingos depend upon can be too heavy, causing floods that can devastate entire breeding colonies. But if the rain falters, the feeding lakes can dry up in the middle of the breeding season. In some cases, the crèches of chicks, yet unable to fly, may need to go on long marches into the desert in search of water and feeding grounds. Many or all may die. Also, lowered water levels might provide access to the breeding site by mammalian predators like jackals or hyenas. But birds like eagles or marabous also sometimes catch and eat young flamingoes. Still, there are years in which all goes well and the flamingos manage to raise thousands of chicks to adulthood.


At present, greater flamingos are not endangered. They still occur in large numbers in the wild, and are also kept in many zoos all over the world, where they adjust and become very tame. An individual in the Adelaide Zoo reached the age of 83 years! Wild birds are dependent upon protection of their breeding colonies, and on not being disturbed while breeding.