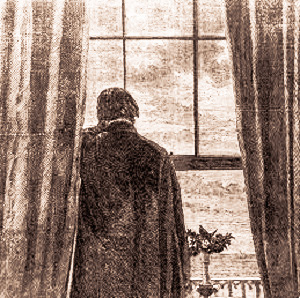 Am I angry at losing my job? Am I happy to be stabbed in the back after thirty years of loyal service? I'd have to have been, even crazier than I am now, not to give a damn, wouldn't I? Do I hate the bastard who sacked me? No. It took me years to get over the pain and humiliation but now I feel nothing and haven't for some time. To feel pain and anger is to hold out some vestige of hope for redemption or revenge but neither sting me to life anymore. At first I wanted revenge, oh yes but I picked on the wrong person – me. I beat myself up and looked for excuses to beat other people instead. I glared and snarled, and they avoided my gaze. That look of sheer hatred, poured out of my eyes, like blood being squeezed out of a stone. Nobody would talk to me and who could blame them? People would cross the road or look down as they passed me, to avoid looking at my face and risk confronting the madman. I was just itching for a fight and a chance to let all that hurt pour out onto others. When I looked at them, all I saw was happy smiling faces that I interpreted as grimaces and sneering. Every overheard conversation became full of snide comments about me, even if it wasn't in reality. Even Susan wouldn't look me in the face and that was the start of the bust up of our marriage. Like the prisoners in The Maze Prison, I went on a dirty strike, in protest against an unfair life as I saw it. I didn't shave. I didn't wash. I refused to join the human race that had betrayed me. It could get lost for all I care! (Except it was me that was lost, going nowhere.

What motive do I have for doing anything? I'm no longer preparing anything anymore, for anyone. My job used to keep me on a permanent high as every new day bought a new challenge, every minute a new difficulty to be resolved. When I used to care, I used to feel – now nothing and no-one touches me. I make mistakes and it means nothing to me...but then, I'm nobody to anybody nowadays, anyway. I have no power,no status. When you want to live, you want others to live; when you want to die, you want others to die too – this is the real dark side of the force. When I was younger I wrote a poem that went

but that doesn't apply anymore. I'd like to be polite and tell you what I really think but I don't do polite anymore, so won't say anything at all. Sartre said hell is other people and he was right, which is why I'm on my own nowadays. Why do we want to be heroes? Because we know we're villains (losers – frustrated by what we don't have, know or can do). Enlightenment is simply that step, where we go from helpless failure to knowing winners: Understanding dawns and successful action follows – knowing what the answer to our problems is (The only thing that we ever truly fight is our own ignorance and it's this that drives us mad with despair at our own helplessness). We hate the isolation and loneliness of failure but love the adulation and recognition that success brings. I of course have none of this in my life, so I'm a wise failure.

Funnily enough I was told that time drags you're depressed but I've found it's the opposite. When the gap between waking and sleeping is filled with nothing, there is nothing to distinguish any part of the day from any other part of it. I have no details to latch onto as they don't exist in my world. It's simply the switching on and off of a light (or maybe that should be 'life'). Existence is like sand slipping through your fingers – nothing solid to grasp. It's like being drunk but not having a hangover. The same confusion, the same clumsy disregard for everything and everyone else.

My doctor sent me to a psychologist, when I was first diagnosed. The hospital had this guy in it, who just sat in this wheelchair, staring into space. The doctor told me he was suffering from clinical depression and I was lucky not to be that bad. I told him about a friend, who'd been in The First Gulf War and was just like him but the medics called it post-traumatic stress disorder. Same thing in some ways, he said – takes you from the world and leaves you shut off, immobilised – similar to catatonia but not caused by a chemical imbalance. Nice man but he could do nothing for me and knew it. It did split up the week though and gave me something to look forward to.

I look at my wife

and think about the time..

When we first met

Now I stare at the clock

watching my life tick away

and think nothing at all,

about nothing at all...