It wouldn't be Christmas without a creature feature, a monster mash-up, matching the creatures that feature in Ray Harryhausen's Greek Mythology films. This year we at last get to enjoy the penultimate episode, the Semi-Final of the tense, edge-of-your-seat drama that is Clash of the Argonauts

A reminder of the competitors: 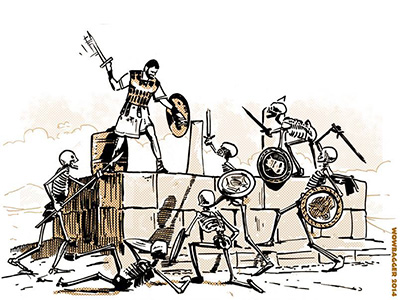 A large seven-headed dragon with two tails. The Hydra defeated the Stygian witches in the opening round, double-headed demonic dog Dioskolos in the second round and Pegasus in Quarter Finals.

A 100-feet tall gigantic statue armed with a gigantic spear, with his only weakness in his heel. In the opening round it squashed Bubo the owl. In the next it defeated the arrogance of Calibos and in the Quarter Finals his bronze body was impervious to the sting of the scorpions, while their exoskeletons were not strong enough to prevent their being squashed. 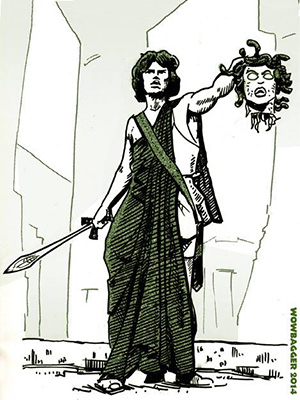 The Kraken is a giant mountainous four-sucker-armed aquatic creature with a fishy tail that eats princesses for breakfast. He defeated sea god Triton in his first fight and then ground the skeletons' bones to dust in the quarter finals.

Once a beautiful woman who has been transformed into a reptilian creature with snakes instead of hair, whose body is covered with scales, has a rattle-snake tail and can only move by dragging herself around on her arms. Anyone who looks into her eyes is turned into stone and her blood is poisonous; a keen archer, she uses poison arrows based on her own blood.

She defeated the figurehead of Hera in her first bout and the terrible tag team twosome of the Harpies in the Quarter Finals.

This struggle between slithering serpents was always going to be the support act to warm up the crowds (although those with ringside seats watching the fight regretted watching it when Medusa inadvertently glanced in their direction and turned them to stone). While neither Hydra nor Medusa could be considered fast on their feet – in fact, neither had feet – the Hydra's tactics have always been to head straight for its enemy and use its seven heads to bite it. Seven heads means fourteen eyes, and it only took one eye to catch a glance at Medusa before turning to stone.

The Kraken, confident of certain victory having already defeated sea god Triton in the second round, swims right up to the promontory where Talos straddles the entry to the harbour. This causes a tidal wave the Kraken expects would wash Talos away, yet his vast weight anchors Talos in place, and the close-quarters wrestling begins. Though the Kraken has four arms he is able to outgrip Talos with ease, his attempts to strangle Talos' bronze neck have no effect. Locked in a deadly embrace Talos unleashes his secret move – he sets fire to the forest near the seashore and stands in the flames long enough to make his bronze body red hot. Dragging the Kraken into the flames and using the creature's own vicelike hold on him against him, even the Kraken's skin blisters and is burnt away.

Who will win the long-awaited final round? Talos or Medusa? Find out Christmas 2019!