After a discussion about the 'Writing Right' column, SashaQ revised this previously written story to share with us. We think you'll agree the thrill was worth the wait. 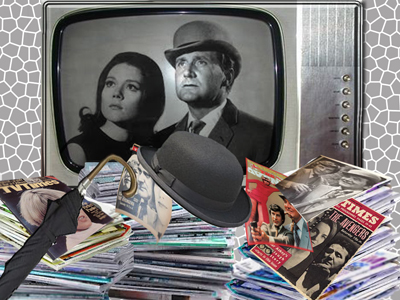 'Thank you, Mum,' John Stockwell said as he placed the paper his mother had given him into an envelope. He glued the flap down and then applied a brontosaurus-shaped sticker over the join - if anyone tampered with the envelope he would know about it.

'Oh, John - you're so melodramatic sometimes. Is all this really necessary?' his mother said as he slid the envelope into the false wall of his briefcase, closed the lid firmly and locked the clasps with a tiny key that he put into his shirt pocket.

'Yes, it is,' he said. 'I'd hate to find out what would happen if this fell into the wrong hands.' While he wrapped a cord around the briefcase and secured it with a reef knot (so he would know if someone removed the cord and retied it with a granny knot) his mother placed her hand on his shoulder. He turned to kiss her on the cheek, then said, 'Right, I'll be off then. If I'm not back by 12.30, send help.'

In the hallway, he put on his trilby hat and opened the front door. Scanning for any movement, he checked the coast was clear, then shut the door behind him and walked briskly down the road.

At the bus stop, John put the briefcase on the floor between his feet, raised the collar of his trenchcoat to protect his neck from the wind and contemplated his situation. One day, he would be rich. He would learn to drive and then buy a bright red car so he wouldn't have to go by bus any more. Maybe he'd even get a limousine with a chauffeur so he wouldn't have to drive and could get on with his work while travelling to his office. And today could be the first step towards that dream.

When the bus arrived, John climbed aboard and showed the driver his pass. Thankfully the bus was otherwise empty. He took a seat near the door, so he could make a quick getaway when he reached his destination, and again placed the briefcase between his feet. To his dismay, at the next stop someone else got on the bus. 'Hello John,' she said as she took a seat opposite him. 'I didn't expect to see you today. Have the school holidays started?' He nodded, but didn't say anything. He often met Sandra on the bus and sometimes engaged in small talk as she told him about her dog, but today he wasn't in the mood for conversation as he was on an important mission.

He had mixed emotions at the next stop when someone else got on. He checked the briefcase was still safely hidden from prying eyes but was then glad to see that it was only another of the regular travellers who had alighted, and not a potential rival. Jenny sat with Sandra and they talked to each other while paying no particular attention to him, much to his relief.

The journey felt like it lasted much longer than usual, as John's senses were heightened every time someone else got on the bus. He didn't recognise anybody else, but they didn't appear to recognise him either so he stayed as calm as possible although he could feel his heart beating more rapidly. Eventually the bus arrived in town and stopped on the high street. John picked up the briefcase and stepped off the bus quickly. He ducked into a shop doorway to survey the scene. The other bus passengers dispersed without hanging round, so he felt confident none of them had been watching him. Other people were wandering up and down the high street with no particular urgency, so John didn't identify any threat and felt ready to proceed.

Walking at a brisk pace without running, John made his way steadily down the high street, weaving carefully around slower pedestrians. Soon he was nearly there, and it was even more important to evade detection as enemies were potentially close. He pulled his hat low down over his eyebrows and raised his collar again as he strode past Antonio's Restaurant with its fancy black and gold awning. Just to be sure, he went further than he needed, turned round and surveyed the street again. He had not seen any movement inside Antonio's, and couldn't see anyone acting in any way suspiciously so he took a deep breath and crossed the road. He made his way back to the slightly shabby grey and black awning of Stockwell's Tearoom, with the sign in the window saying 'Open for Breakfast' and quickly entered, closing the door behind him.

John gestured quickly toward the customer enjoying a freshly cooked Full English Breakfast and said, 'Hello Kath - I need to speak to the chef, in private.' Kath ushered him through to the storeroom and he stood there for a few minutes, his heart racing as he looked forward to completing his mission. He began work on opening the briefcase.

'Hello Nephew John,' the chef said cheerily as he entered the storeroom. 'What have you got there? It's not another recipe for Spaghetti Bolognese, is it? You know we can't compete with Antonio's when it comes to Italian food.'

'Hello Uncle John,' John said. 'No, it's not Spaghetti Bolognese, but it is something the customers are going to love, honest. It's Mum's secret recipe for Cottage Pie!'