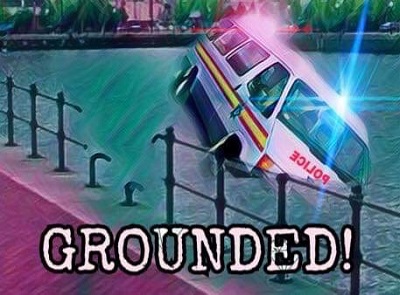 The Chief Inspector made a big show of pulling up the blinds, each tug on the chord accompanied by a hideous screech that the two officers tried valiantly to ignore.

"Tell me, Constables," a grand gesture to the view from the second-floor window, "Do I see the Golden Gate Bridge, Times Square, Tombstone, even?"

The officers leant forwards, staring intently at the quiet Mancunian roadway and the small industrial estate opposite, "No, Sir"

"And I'd be correct in assuming you are not, in fact, members of the NYPD, SWAT or some other squad currently popular in the movies?"

"I ask these questions simply in an effort to explain this!" He slammed a rather thick file down onto his desktop, "This list would not be out of place in a scene from bloody Lethal Weapon or Die Hard, perhaps?" The list was produced with a flourish.

"Let me see....three Pandas, beyond repair. Four response vehicles – two smashed into railings, one halfway up a bloody tree and, my particular favourite, the last found upside down in the park bloody fountain!"

Steam from his ears appeared to be the only thing missing from the rant.

"Then there's the damage to public property and council equipment, do I need to read the next list?"

"No, you may bloody not say, not one bloody word! Am I clear?"

"From today you are both on permanent foot patrol, you will not be allowed behind the wheel of another police vehicle without my express permission. The only reason I am not suspending you both and bringing disciplinary action is your exemplary arrest record and the fact that these 'accidents' occurred in the pursuit of these arrests. However, if you so much as snap a bloody pencil I will make it my personal duty to throw the bloody book at you both, now get out!"

In the corridor the officers grinned sheepishly at each other.

"Went quite well that! Thought he'd be a lot angrier!"

Ten minutes later, as they trudged out of the station, they stopped to drool over the brand spanking new riot van that was being delivered, top of the range, fully equipped and very expensive.

"Nice bit of kit, have you seen the top speed these things get up to?"

"Would've been nice running her in, mate."

With a few backwards glances they walked away.

Two hours later, latest prisoners booked in, evidence logged, they sat in the writing room, mounds of paperwork to get through.

Sipping coffee and stabbing at typewriters when the call came over the radio.

Pursuit coming their way. Three police cars already rammed off the road. Occupants responsible for some very serious crimes in neighbouring Lancashire. Backup requested from the one remaining pursuit car.

Nobody near. No response, all patrols tied up or miles away. Stolen vehicle now riverside, another request for backup.

Sight of the target as it rams the Cavalier off the road, mounting the curb, narrowly missing pedestrians. Up and onto the pedestrianised riverside walk, scattering tourists and pigeons.

Up onto the grass verge, handbrake jammed on, the van spinning around the abandoned car, narrowly missing trees. Quick gear change into reverse, four loud bangs as bodies crunched into the side of the van.

Officers jumping out and detaining the downed criminals. Handcuffed and cautioned.

Control informed of the arrests and location.

As the officers turned to place the detainees into the van, shocked looks.

The brand spanking new and very expensive vehicle still travelling slowly backwards, down the verge, across the pathway, crunching through the chain fence, teetering tantalisingly slowly, rocking gently as the rear wheels spun above the river, gravity claiming the vehicle.

A splash, some bubbling and blue lights dimming as the river swallowed the brand spankingly new, but now dead, van.

"The boss will be pleased!"