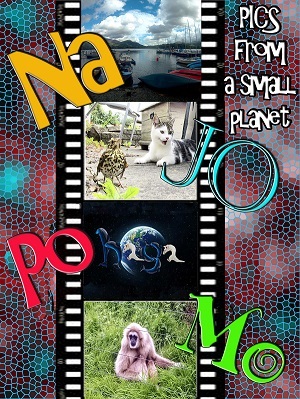 November is NaJoPoMo around here. It involves posting a journal entry every day. You can read all about it at Create's NaJoPoMo Project.

This month-long journal is called 'Pics from a Small Planet II', because it's the sequel to last year's effort, see? It's based on photos sent in by readers of the h2g2 Post. We hope you enjoy them.

h2g2ers live all around Earth: north and south of the Equator, in Europe, Africa, the Americas, Asia, wherever Australia and New Zealand are. . . you get the idea. We see a lot of different weather, a lot of different animals, and many different people.

h2g2ers live in cities, out in the country, in small towns, and in suburbs. They inhabit different climates. One even lives on the Isle of Wight! (He won't shut up about it.) They travel a lot, too. And wherever they go, they keep a weather eye out for the unusual. They snap pictures. That's because they know that if they don't, the Post Editor will fuss and post more cat photos.

If you have a photo to contribute, send it to the h2g2 Post. If we don't manage to get it into this journal, we'll feature it in an upcoming Post issue.

If we don't get enough pics from our readers, we will show you the Post Editor's videos. The sight of spidery fingers creeping around keyboards will scare you enough to make you rummage in your digital files.