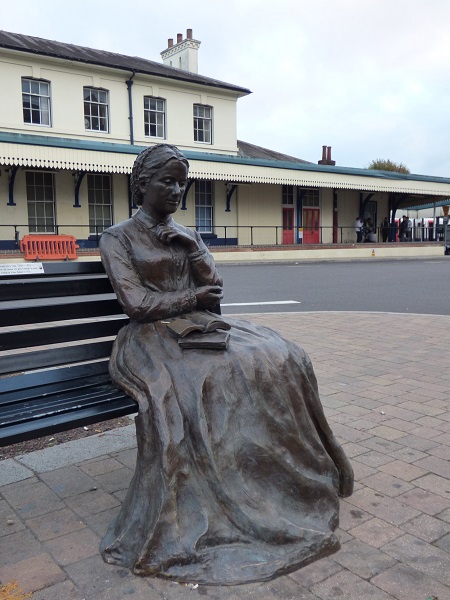 I recently went on a holiday to the south coast of the UK to meet friends and family as well as to do some sightseeing.

When I say 'family', I count h2g2's favourite Aunt Charlotte amongst it - I visited her statue and was pleased to see she is looking well. She looks even better given that the powers that be have moved the litter bin that tended to photobomb pictures of her. Thus I enjoyed an evening in Eastleigh.

I went sightseeing in Portsmouth, where I visited the Mary Rose Exhibition. It was incredibly moving to see the preserved wooden remains of the once-powerful Tudor warship that had managed to survive for hundreds of years under water without rotting away. However, I was very glad that my honorary sister in law (HSIL) had joined me, because the lights frequently dimmed and film projectors brought the crew to life inside the ship - it made us jump to catch movement out of the corners of our eyes while we were looking at the other items that had been recovered from the shipwreck, but then we were able to reassure each other that it was fine!

It was similarly daunting for HSIL in Portsmouth Historic Dockyard in the exhibition about boatbuilding, which was on a mezzanine floor some 20 feet above the ground - I skipped over the little bridge from the lift to the main area, only to turn round to find HSIL still clinging desperately to the handrail outside the lift - she confessed she is afraid of heights and seeing the bridge made her feel dizzy. She managed to run over the bridge by focusing on moving towards me without looking down, and then we enjoyed the exhibition, especially the hands-on activities such as learning to row a boat in unison. I was much more gentlemanly for the return journey and escorted HSIL safely to the lift, so we were soon back on the ground floor, much to her relief.

A highlight for me was being able to access actual ships in the Historic Dockyard collection. I was grateful for HSIL's help with climbing up the steep gangplank to the deck of HMS Warrior, and once I was up there I was very impressed to see all the ropes, cannons and other equipment, and to be so close to the masts and the rigging for the sails. In contrast there was no access for me to the top deck of Nelson's ship HMS Victory but I was able to go through a gun port to the lower deck to see more cannons, plus the galley area and the hooks where crew members would have put hammocks for sleeping in. It was very evocative to be in the dim light among the equipment and ropes, but I can hardly bear to imagine what it would have been like in the heat of battle with the deck filled with men and the air filled with the sounds and smells of the fight...

On the friend front, one planned meeting didn't take place as the friend of me and my partner had come down with a bad cold. Even though Bluebottle was starting to show symptoms of something similar, our h2g2 micro meet did take place and that turned out to be excellent, not least because we exchanged gifts after Bluebottle had had an 'I saw this and thought of you' moment in a shop called Forbidden Planet1. Not only had I not heard of the shop, I was also unaware of the existence of the range of My Little Pony: Friendship is Magic fan merchandise aimed squarely at adult 'Bronies'(I have of course seen a variety of items in the extensive range of MLP:FIM toys for children). However, the fact that I am a Brony had not escaped Bluebottle's attention - I am now the proud owner of a model of Discord, the quirky Q-esque omnipotent antagonist in MLP:FIM!

When I got home after my holiday, I introduced Discord to my other member of the MLP:FIM family and filmed the encounter for posterity! Somehow I don't think this is the last we'll be seeing of Discord in Human World...

1My gift of treats for the cat seemed comparatively feeble but luckily was very much appreciated by the cat!