Get Back on the Plane 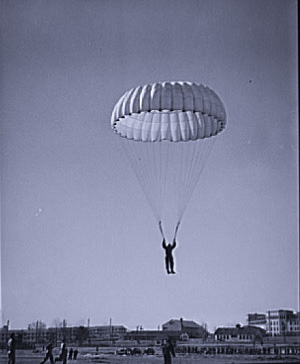 This has been a story from childhood.

When you are growing, stories are a mainstay, but their suitability can be debatable.

A close relation served in the parachute regiment in WWII and would regale us with stories of his service. After a long talk and the odd stories, the inevitable question was asked, 'What happens if the parachute doesn't open?'

In a Dakota we all had to line up and we had to attach the parachute hook of the man in front on the static line. When the green jump light came on, the men jumped from the plane and formed a line of descending troopers referred to as a stick.As sometimes happens things go wrong and about half way through one of the chutes did not open properly, and formed what was called a roman candle.

When the plane landed, the troops were assembled by the sergeant . 'Right, you lot: who witnessed that accident?' Several stepped forward get in that truck. They were taken to the place where their unlucky friend had landed.

'Now, gentlemen, these things happen and you have to get over any possibility of reluctance to jump. Get in that truck, get another parachute and back to the Dakota double quick: you all are going to jump again!'

Needlessly to say it went well – all landed successfully, and it did restore their confidence. The thing my relation learned was, 'Keep your mouth shut.' When the time came, he had to walk very fast up a Normandy beach. The first man was hooked on by the second and second man by the third one and so on: the last man was hooked on by a member of the Dakota crew.

View from My Window Archive