As you may already know, I'm a Queen fan. When I was notified about their recent new heartbreakingly beautiful video to accompany Brian May's song about his cat, it caused me to reminisce about my cat and what might have been different in hindsight.

At the time, my family and I didn't know it, but in retrospect our cat was not a cat but was an angel in feline form. 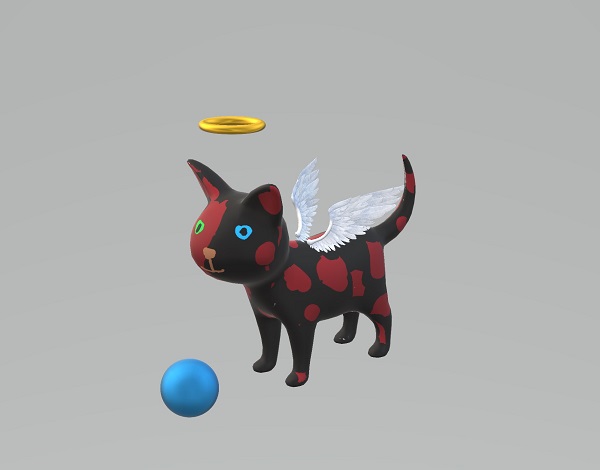 She first appeared in our garden as a kitten who managed to climb up the fence into our garden, but couldn't climb back out again. She looked at us through the window as if to say, 'Oh dear, I'm stuck here now - I'll just have to move in with you,' but my parents helped her to climb out again and away she went to try again the next day.

After a week or so someone put a collar on her, but there was no name on the tag so we didn't know where she was living when she wasn't in our garden. Then one day she turned up with a shaved side after having been neutered and she looked at us as if to say, 'Look what they've done to me - I can't go back there!'

My parents searched and searched to try to find out who thought they owned her but nobody came forward. Reluctantly, but somewhat happily, my parents then agreed that she could move in with us.

Not for us the cat flap, litter tray and other random paraphernalia of cat care - if cat needed the toilet, she had a way of saying, 'Can I go outside please?' and then when she was ready to come back in she would make a squeak sound with her paw on the window to ask someone to open the door for her.

She kept herself to herself for much of the time, sleeping in her own little blanket in the corner, or going outside and hanging out with the neighbours' cats. However, when I was ill (which was pretty much every month because I managed to catch every cold that was out there) she would gladly sit with me to help me feel better.

My absolute favourite memory of cat is each Saturday morning when I liked to read in bed for half an hour, she would come and join me. We would snuggle up together and I would hold the book so we could both read it and we enjoyed the time immensely.

So many regrets in later years, though... I tried to do a petcare badge and drew up a beautiful chart to document my efforts, but one day my mum asked me to feed cat while my 'friend' (who just happened to be the class bully) was there so the consequences caused me to give up, even though I had been nearly there and it was for cat's benefit as much as mine... The local vet persuaded my parents to book cat in for a 'special check up' - it just happened that cat turned out to have a disease, as did most of the other cats in the neighbourhood who had visited the same vet (which closed down soon after that)... The disease made cat smell more like a dog, so my asthma medication wasn't strong enough to prevent allergic attacks and I couldn't sit with her for very long even though I would have liked to have returned the favour... One day I tried to make a meaty milkshake for her to help her eat, but for some reason all my mum could give me to blend the meat into the milk was a teaspoon so my efforts weren't as successful as I had planned... My parents were able to pay for some treatment for her that provided a bit of relief from the disease each month so overall we did what we could under the circumstances, not having the benefit of hindsight and the ability to go back in time. Cat lived to the age of about 13.

Thus cat was an angel in feline form - she entered our lives from nowhere and fitted in as best she could, and in the all too brief time available she gave and received as much love as possible. I am so very grateful to have known her.