The Thirteen Club: Debunkers or Mythmakers? Content from the guide to life, the universe and everything 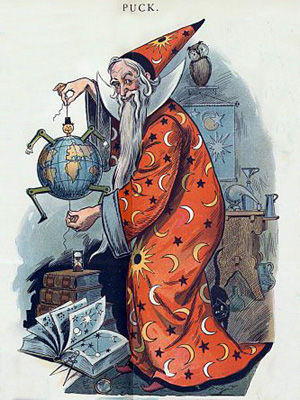 Paraskevidekatriaphobia: fear of Friday the 13th. It's a staple of Western Civilisation, right? The most potent and persistent vestige of magical thinking in our world. The prejudice against Friday the 13th must be really ancient, surely, going all the way back to the dawn of time, or at least, to the first calendar? And it must be the fault of those benighted people in Europe who believed in witches and such, or maybe the Druids? Who promulgated the superstition that Friday the 13th was unlucky, anyway?

Would you believe Theodore Roosevelt and Robert Ingersoll? Mind you, they didn't mean to.

Fighting superstition can have unintended consequences. Just ask Captain William Fowler, if you have a ouija board handy. 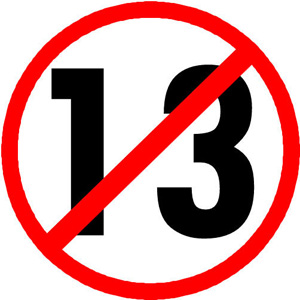 To get this out of the way: the number 13 has been considered unlucky in Western culture for a very long time. Ancient Persians divided the Zodiac into 12 signs: they feared 13 as the number of celestial chaos. The Greeks, possibly the most superstitious people in Europe, really didn't like 13, and avoided it. The Romans found 13 an inauspicious number.

The British – possibly the second most superstitious people in Europe – refused to have 13 people sit down at a dinner table, for fear one of them might die shortly. This allegedly had something to do with either the Last Supper (when Jesus and his disciples were 13 at table) or the Norse gods (Loki turned up and made 13, then Baldur died, which made everyone sad, because Baldur was a lot more popular than Loki), or maybe both. The dinner table superstition goes back at least to the early 19th Century in Britain, although there are European myths – stories of the Norse gods, the Grimm folktale Sleeping Beauty  – that hint at an older origin for a dislike of 13 at table.

In Britain and North America, Friday was also considered an inauspicious day. People didn't like to start new enterprises on a Friday. Friday was often chosen as the 'hanging day' for executing criminals (which was certainly unlucky for the criminals). But until 1881, apparently, Friday the 13th wasn't considered particularly unlucky, except for the fact that the day combined two 'unlucky' things: a Friday and the number 13.

And then Captain Fowler decided to wage war on superstition by starting the Thirteen Club.

The last decades of the 19th Century were a time of Progressivism in Europe and North America. Progressivism – with a capital 'P' – was the belief that scientific thinking and goodwill together could solve any human problem. Progressives improved education, cleaned up slums and sorted out corruption in government. They were sort of like bossy liberals. They passed laws with teeth, and they had a lot of muscle behind their good intentions. While some Progressives, like William Jennings Bryan, were practicing Christians, many, like Robert Ingersoll, were not. The agnostic Progressive tended to regard religion, any religion, as a form of superstition. And they did not like superstition.

According to founder William Fowler, the idea for the Thirteen Club came from the dinner table superstition. Captain Fowler1 was frequently annoyed when a lady of his acquaintance sent her nine-year-old daughter away from the table if the number reached 13. The little girl was a friend of Fowler's, and he missed her company. Fowler decided to fight this (to him) annoying prejudice, and tried to get 13 men together to deliberately eat a meal at a table with 13 diners.

It took him a year.

The Thirteen Club was founded in 1881. They ceremonially entered the restaurant's dining room under crossed ladders to tables covered with open umbrellas. They deliberately broke mirrors, spilled the salt (and didn't throw any over their shoulders, devil or no devil), and crossed their dining utensils. They had a good time, and why shouldn't they? The whole three-course meal cost 13 cents apiece.

The idea caught on, and by 1887 they had 487 members. Lots of tables of 13. Thirteen Clubs were founded in other US cities, and in 1889 the first British Thirteen Club was founded. Robert Ingersoll, the famous atheist orator, joined, and five US presidents were honorary members, including Theodore 'San Juan Hill' Roosevelt. By joining the Thirteen Club, you could enjoy good dinners – held on the 13th of the month – and network with possible business partners, while virtuously opposing retrograde ideas. A win/win, you'd think.

Evidence: about this time, the skyscraper was invented. Of course, the Home Insurance Building in Chicago, built in 1885, only had ten storeys. But soon, the buildings got higher. Higher than 13 storeys. And guess what? Nobody wanted to live or work on the 13th Floor. At least, not in the United States. This is still true today. According to the Otis Elevator Company, who make lifts, 85% of US high-rise buildings do not have a 13th Floor.

Well, of course they have a 13th Floor. But it's called the 14th. Is this possibly the fault of the Thirteen Club? After all, realtors frequently claim that they, of course, are not superstitious... but their client might be, and who wants to lose a customer over a matter of opinion? Besides, leaving out the number 13 means the building sounds taller, more impressive.

The Legacy of the Thirteen Club

Paraskevidekatriaphobia has left a lasting impression, at least in the United States:

The Thirteen Club has a lot to answer for, and this time they can't blame it on witches.

1Captain Fowler was called by his rank because he was a veteran of the Union Army in the Civil War, where he participated in 13 major battles.2And an unrelated 1933 British film called Friday the Thirteenth, about a bus crash on the unlucky day, which brings the total to an unfortunate 13.