I was given a couple of cartoon books for Christmas. One was a two-volume set of Pogo comics. I love Pogo, as you can tell from the Edited Guide. I read Walt Kelly's work as a kid. It formed part of my understanding of the social and political universe. I'm reading the ones that were written before I was born: lovely nonsense about Pogo trying to learn to play the piano from a bullfrog so that he can play in a jazz band with a critter named Solid Mahogany. Lots of good music jokes and parody lyrics.

The other book is more confusing: it's a reprint of early cartoons by a man named Winsor McCay. That's a real name, not a pseudonym. I guess nobody would bother to make it up. McCay was a gifted artist, and I appreciate studying his style, but his 'humour' leads me cold. Whoever just said, 'Now you know how we feel when we read the h2g2 Post,' be ashamed of yourself. But it's a fair comment. We don't all respond to the same stimuli.

I really wonder what was wrong with them back in the early 1900s. Seriously.

A few weeks ago, I wrote about humour. You may have noticed that I found turn-of-the-last-century humour pretty 'problematic', to use the postmodern phrase. A lot of it is just plain nasty. It depends on picking on your neighbour, or anyone not like you. That period's humour can be pretty aggressive. Winsor McCay was no exception. On top of it, some of his humour was downright weird. And I don't mean in a good way.

Between 1904 and 1911, McCay drew a weekly strip called Dreams of the Rarebit Fiend1 We need to unpack the title. A 'fiend' in the parlance of that foreign country known as 1904 was an addict. It didn't matter what you were addicted to, you were a '(blank) fiend'. So what's a 'rarebit'? 'Rarebit' is not a real word: it's what some literal-minded people call Welsh Rabbit, a bread-and-cheese dish with some spicy ingredients, and possibly ale or wine thrown in for flavour. Ambrose Bierce said that people who called Welsh Rabbit 'rarebit' were too dumb to get the joke. (There's no rabbit in Welsh Rabbit, just cheese'n'stuffz.)

For some reason, there is a persistent belief that after eating Welsh Rabbit, people will be prone to nightmares. The British Cheese Board did a study in 2005 to dispute this – after all, they want to sell cheese – and concluded that cheese did affect your dreams. In fact, different cheeses give you different kinds of dreams. The British Cheese Board insisted that nobody in their study got nightmares, though they did report some very odd dreams. A commenter on the Straight Dope messageboard considered this was a matter of opinion: 85% of British women who ate Stilton in the study reported dreams which they thought weren't nightmares, just really weird. The commenter said British women were weird, because he would categorise a dream about a talking plush toy as a definite nightmare. In other words, British women in general share imaginative features with h2g2's own Daydream Journal, we suspect.

Be that as it may, there may, or may not, be something to the Welsh Rabbit (or Rarebit) theory. Which has absolutely nothing to do with this awful weekly cartoon other than the running gag. Every single one of these cartoons goes like this:

We're supposed to find this amusing. We're also supposed to keep in mind that this strip showed up shortly after both the publication of Freud's Interpretation of Dreams2 and around the time of the beginning of the Surrealist movement. I'm not sure that's much of an excuse. What McCay seems not to have realised is that the problem with writing dream sequences is that the audience now knows what you're afraid of. And who you like and don't like.

We learn from biographical sources that Mr McCay was short, and that he didn't get along with his wife, who was more imposing than he was. I was filled with glee, after studying his neurotic cartoons (he shrinks a lot in them, other people grow) to find out that McCay was shorter than I am. Hee-hee. It never worries me, except when I'm afraid I'll fall off the organ bench at church. That was about the best laugh I got out of the stuff, though. Most of it is pretty grim. I don't think he liked people very much. That could be why William Randolph Hearst hired McCay, told him he wasn't funny, and set him to drawing political cartoons. Good call.

The people in McCay's cartoon dream diary could probably have benefitted from a session with Dr Freud (or three). Take a look at a cartoon I got from a public domain source: 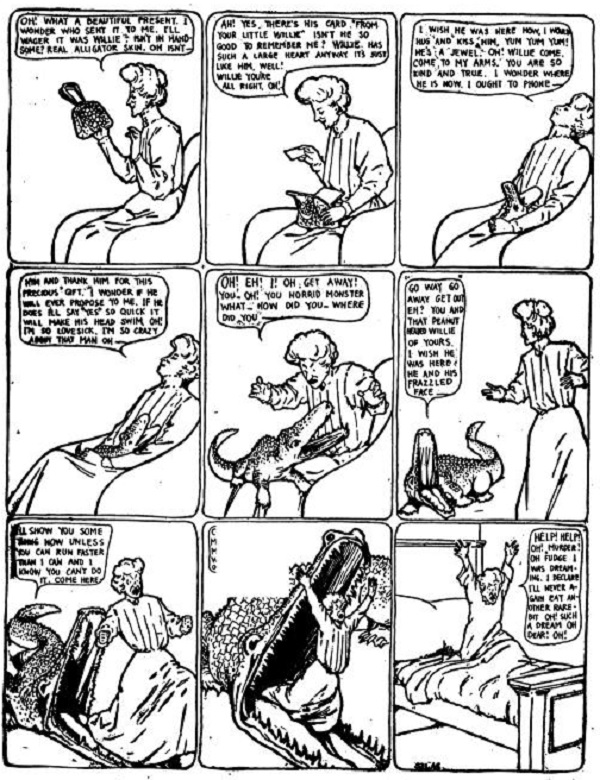 Is there anything to be learned from all this? I dunno. Maybe that it's good to go hunting in the Akashic Record, but beware of what you find. You'll need some background information to interpret it properly. Don't believe everything you read. And you can learn a lot from Christmas books. I hope the one I gave my great-nephew is half as useful. (It was a 1944 novel called AWOL: K-9 Commando. I liked it when I was his age.)

1He also drew Little Nemo.2What I think of Freud, you already know about.