No matter what FWR says, the Editor is not responsible for this outbreak of supernatural fiction. We blame the Night Shift (and 2legs). Anyway, we're enjoying it.

In this weird tale, a Scotsman ends up where he has no business being, much to the annoyance of the Liverpool police.

The Lying Scotsman. Glasgow to Liverpool – The Supernatural Route 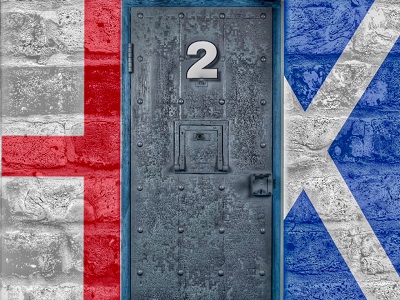 "Will someone please shut that bloody drunk in two up!" The Custody Sergeant growled to the two officers drinking tea behind him. Sgt. White was having a rough start to his nightshift.

Three assaults, all wanting briefs. A Polish drink/drive who needed an interpreter, four staying in custody on warrant, two needing half-hour physical checks throughout the night, a couple of prostitutes and several drunks had greeted had him on the Sunday changeover.

He'd just finished checking the custody sheets and ringing around duty solicitors when the banging started. He hated noisy drunks, just get your head down and sleep it off, get your caution in the morning and everyone's happy.

Shout all night and kick the cell doors and nobody was happy, upset the other detainees and really, really upset the staff. A sure way to end up before the Morning Magistrates!

The noise stopped momentarily as the young officer opened the hatch, then restarted with a vengeance as a torrent of unintelligible abuse was hurled at the officer, then the banging started again.

"Great!" White shook his head and went to check the notes avies [the afternoon shift] had left on the drunks sheet.

A glance at the wall showed cells 1, 3, 4, 5, 6, 7, 8, 9 and 11 occupied. No 2. White cursed the newly promoted afternoon sergeant and bent to dig the marker pens out, turning to his computer to see if the occupant of Cell 2 had been sober enough to supply details at the time of his arrest, but judging from the shouting still reverberating around the cell block, he very much doubted it!

White cursed again as the computer failed to give any details regarding Cell 2 being occupied any time after seven on the previous Friday morning, and that was a female shoplifter who had been charged and bailed.

White sorted through his keys as he strolled down the corridor, stopping to get a plastic cup of coffee before opening the hatch, strong beer and whiskey fumes and stronger language poured out. White shook his head and went to check the notes avies had left on the drunk's sheet.

"Look mate, stop effing and blinding, be quiet for a bit and you can have a brew, yes?"

Muttered swearing in a very Scots accent, then blissful silence as the prisoner sat on the plastic mattress and greedily gulped the coffee.

I'll get you another and maybe something to eat in a bit, but I need you to behave, give my lads your details, eh, and you'll be out of here before you know it?"

White returned to the custody desk and began trawling through the paper PACE 1s, keen to check just how long the drunk had been I/c. With the custody clock ticking, any breach of his rights and hey, presto, a civil litigation loomed for wrongful detention.

Nothing. Not even a form with "DP violent – straight to cell" which was usual in some cases when officers were attacked or abused upon arrival. But even then there was a record of the arresting officer, place of arrest, property etc. Nothing at all on this guy.

He looked at the clock – 2.34 am. Just for ruining his night, he was tempted to call the previous CS, wake him up and ask for an explanation as to why he'd dropped such a big clanger.

He was interrupted by his COs arrival at the desk, name, DoB and last known address for the drunk. The bribe of coffee and a ham sarney had paid off. Hurray, some progress.

The address was in a district of Glasgow so he very much doubted he'd be bailing the guy anytime soon.

He rang the Force records office. No trace, no warrants, but a match up in Scotland. PNC showed a very long list of previous convictions for minor offences, but what was most confusing was the national computer system had the man currently in custody in Glasgow.

Must share a name and date of birth? Or the guy was simply giving joey details.

A quick call to Glasgow custody suite to check who had the real prisoner and he could get on with back-tracking the sheets.

"No, Sarg. He's very well known to us, d and d in the town centre 01.15, arresting officer verifying address, kept I/c due to disruptive behaviour, but to be honest we haven't heard a peep since one thirty, had a cup of tea and got his wee head down."

White thanked his Scottish counterpart and went back down the corridor. Halfway to the cells, he was called back to the phone urgently.

At the same time the requested mug shot of Robert James Dalgliesh came through the fax, definitely his pic, so who was the drunk in Glasgow giving his details? Thought he was well known to them, what a crock!

He'd ring back and inform them after he'd dealt with this call. Let them share some of his growing misery.

"You can start by explaining to me how the hell Rab has managed to walk out of a locked cell, travel three hundred miles to Liverpool in under an hour and end up locked up again in your nick if you'd please be so kind, sergeant!"

White imagined the mountain of paperwork ahead of him trying to write this off. He took a breath and spoke two words.

He heard the sigh of relief amid the sounds of Scottish paperwork being ripped up.

"Andy, get the drunk out of two, give him a telling off, and do us a favour, drop him off at Lime Street, would you?"