The generators hummed into life, smells of diesel filling the tunnels as hundreds of lights came to life.

Police teams began the laborious task of searching, cataloging and sealing
each and every tunnel beneath the city. Dog handlers coaxed their reluctant partners into the darkness, armed officers nervously cradled their weapons, aware of the dangers of ricochets in the confined areas.

After hours of work, only one ancient passageway remained, cordoned off and well-guarded. Davies struggled with claustrophobia as he addressed his teams, his vest felt heavy and unnatural as the bulk of the armour soaked up cold sweat.

Three canine units entered the tunnel, the powerful German Shepherds whimpering like pups, not enjoying this latest game their masters were insisting they play. Snouts twitched as the smell of death and decay reached them. Something else too, something unnatural and frightening.

"Go find lad, good lad!" The handlers encouragement was met with sad and confused brown eyes as the darkness enveloped the dogs.

short time later and pitiful howls reached the handlers, desperate painful yelps spurred the men to charge into the tunnel to protect their beloved animals. 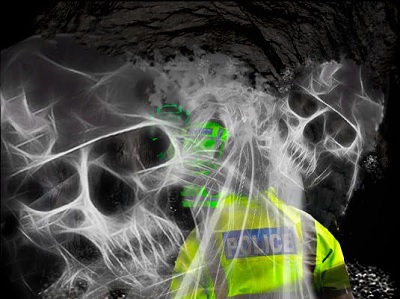 The officers shifted uncertainly, checking numbers and taking role calls before getting a grip and following the dog handlers' cries.

Davies squinted uselessly into the nothingness, eyes straining to make out shapes amid the black. Grey shadows shifted close by, the fetid air turning to ice.

"Police! Stay where you are, put your hands on your heads and kneel down! There's no way out my officers have you trapped."

Again the shadows shifted: was that a deep growl, one of the dogs maybe?

"Last chance!" Davies tried to keep his voice from cracking," On your knees, hands behind your head or we will use force!"

The words sounded hollow even to his own ears, but in the total absence of light there was little else he could do.

The armed unit squeezed past Davies, weapons at the ready. Flares were thrown into the cavern, red glows being engulfed easily by the shadows, pitiful embers in the darkness illuminating two manlike shapes before guttering out.

"Armed police, on your knees or we will open fire!"

Grey boiled out of the black, shapes strobing in the deafening muzzle flares. Six, eight, ten rapid fire double shots. Shouts and cries as one by one the officers were torn to pieces by the whirling shadows, talons ripping through Kevlar and flesh.

Davies pushed his team back, retreating from the supernatural fury. Bitter cold at his back as the retreat turned into a route, Davies felt something sharp at his neck, then all was blackness.

Joseph had been stirred by the heat of meat, for over a century he had existed as nothing more than mind. The hunger was always constant, but with no means of feeding in the labyrinth, he and George had succumbed to an existence of peaceful acceptance of their state, moving slightly every decade or so. Eventually, even conscious thought ceased, merely being.

Their peace was shattered when rain water had collapsed one of the tunnels. Air currents reached the dormant shadows, faint aromas of food invaded their senses. Moving slowly towards the promise of food, the pair, over decades reached the city above.

Rats were the first blood they consumed, each mouthful solidifying their beings, forcing hunger to the forefront, craving more food, more substance, they had ventured out into the night.

Vagrants and drunks were aplenty in the maritime city, kills being ignored by those who even noticed the bodies. Over time the city grew, more meat but not as easy to come across without cries of anguish and panic.

Feeding peacefully became unusual, then there was a time of plenty. Fires filled the city as death dropped from the skies. The world was at war and nobody missed the meat.

Becoming stronger and bolder, the pair harvested as the bombs fell on Liverpool.

Leaner times soon followed, but at least the homeless and addicts were back in the city.

There was a place too that offered treats: rabbits had always been Georges favourite, and one feeding spot regularly provided furry sustenance.

Now their peace had been shattered further as meat invaded their resting place, noisy vengeful meat that sought futilely to end their existence.

oseph stooped to pick up a hind leg, crunching through flesh and bone, aware that his brother too was gorging on the latest offerings.

The hunger was all. Meat still nearby. Joseph threw the stripped bones away and moved forward.

A sensation not felt for over a century caused him to stop. Eyes flared in the dark as he held a taloned hand to his face, pain flared in his palm, bringing back long forgotten memories. George sensed something too.

Shadows stood still in the darkness, two hellish shrieks reached the ears of the retreating police teams. Then all was quiet. 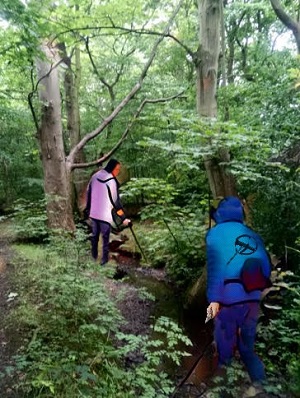 Jamie knocked on the rotting frame, unwilling to disturb the strange bits of bone and leather that were pinned to the door, strange symbols carved everywhere in the wood.

He flinched as the door swung inwards and the old woman's face leered out.

"Ow do, Mary, it's Jamie, look we've found something down by the Gill, looks like an old coin or something!" He spat into his hand and rubbed furiously at the metal, George the Third exposed as the dried blood was finally removed, freeing two grey shadows miles away.

"Come on in lad, forget the coin, it's not valuable any more, but I've something far more important to show thee." Blackened teeth smiled at him.

"But tell the boy to go home first. "