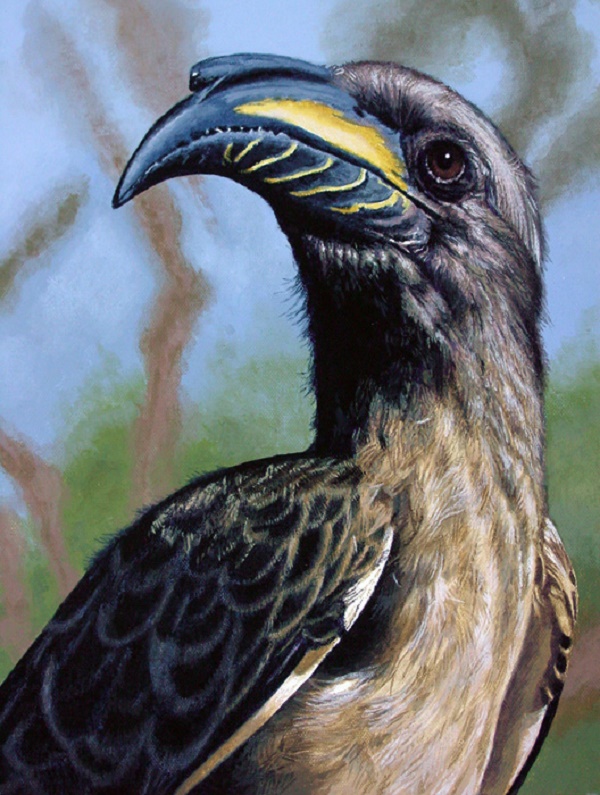 Back to the familiar for me! This is an African Grey Hornbill, Tockus nasutus, over here simply called a Grey Hornbill. Three other species called Grey Hornbill occur in Asia, but they're actually not closely related to this one. Instead, its closest relatives are the other small, largely terrestrial hornbill species in the genus Tockus which are confined to Africa. It is most similar to the Pale-billed Hornbill of South-Central Africa, which replaces it partially in well-developed woodland. The African Grey Hornbill itself is, strangely enough, the only African hornbill species that is not confined to the continent, being also found in the extreme southwestern corner of the Arabian Peninsula. Apart from that, it occurs over the entirety of sub-Saharan Africa, except for rainforests, dry deserts, and treeless grassland and shrubland regions. Indeed, it is the most widely distributed of all the African hornbills.


In South Africa, this is one of the most frequently encountered hornbils, along with its relatives the Yellow-billed and the Redbilled hornbills. Outwardly it is not a spectacular species, but is has its own charm. It's plumage is a drab brownish-grey and white, and it has a fairly small bill. It doesn't have the large casque found in the bigger hornbill species, its own casque being no more than a narrow ridge on its upper bill. Consequently, it also doesn't have an amplified trumpeting call, instead emitting a high, whistling call. It reaches an overall length of about 45 cm/18". The female is similar to the male (shown here), but with a red tint to the tip of her bill as if she were wearing lipstick!


Of the small hornbills of the African savannah, this one is rather less terrestrial than the others. It feeds most of the time in trees. It takes a lot of fruit, such as those of wild figs or the drought-resistant small trees of the genus Commiphora, as well as the nutritious seeds of various thorn tree species. But it also catches insects in the foliage, favouring large kinds like mantids and caterpillars. In spite of its flight appearing laborious, it is agile enough to snatch flying termites and large bees out of the air. It will also feed on small vertebrates like mice, lizards and tree frogs. It takes about 20%-30% of its food off the ground. This species often follows troops of baboons or monkeys, or herds of zebras, or larger birds like bustards or ground hornbills, catching the insects and other small things they scare out of hiding. Sometimes, grey hornbills will dig in the ground for beetle grubs. They also sometimes take chicks and eggs from the nests of smaller birds, which consequently tend to flock together and try to chase them off whenever they spot them. All parts of their food that they don't digest, they regurgitate again in small pellets, which can be found on the ground underneath their roosting sites.


Because of being dependent on fairly lush tree foliage for finding fruit and edible insects amidst, grey hornbills are somewhat nomadic, following the rains and the fresh growth. In some regions this means that they move north-south; in other regions, they move from higher to lower ground, as necessary. During these movements they sometimes congregate in flocks of up to about 100 birds, but at other times they are much less social, occurring alone or in pairs.


Male grey hornbills utter their distinctive whistling calls as part of a territorial display. They perch right at the top of a tree or bush, and point their bills up to the sky. With each whistle, they flick their wings out to the sides. They also rock their bodies forward and back as they call. This display and call also helps the male and female to bond: couples will call together, synchronising the whistled phrases as well as the body movements.


Like other hornbills, this species nests in holes – natural tree holes, or holes excavated by barbets or woodpeckers; also sometimes hollows in rock faces, or even holes excavated in level earth by the ground-nesting Red-And-Yellow Barbets. The female enters the nest hole, and then she covers up the entrance with her droppings and food remains, until only a small slit is left for her to poke her bill through. The male brings her food while she lays and incubates her three to five eggs. She also moults her wing and tail feathers while in the nest. They are regrown by the time she breaks out again, when the oldest chick is almost ready to fledge. The chicks then reseal the hole, and now the female and male feed them together. Finally the chicks break out – not all at once. She staggers her egg laying so that there's a day or few age difference between the chicks. The eldest breaks out first, then the younger ones reseal the nest; a day or two or three later the next elder breaks out, and so it goes until the last chick emerges.


This species is preyed upon by a variety of falcon, hawk and eagle species. But if all goes well, adults can attain an age of 20 years in the wild. This species is widespread and abundant, and not endangered.


I'm indebted to my friend Sandrie De Wet for providing the photo I used as reference for this painting.