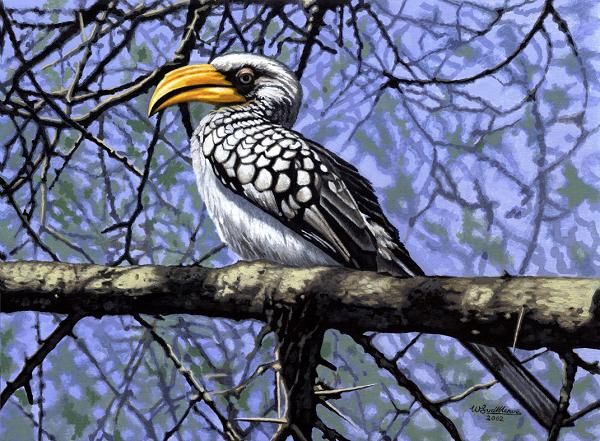 Once more I bring you a picture that I am very fond of. The photo from which I painted this was taken during the same holiday in the Kruger National Park during which I photographed the African Mourning Dove. I am not sure it was at Letaba, though. It might have been in the nearby camp of Olifants.


This is a Southern Yellowbilled Hornbill, Tockus leucomelas. It is in the same family as another bird that was featured here, the Sulawesi Wrinkled Hornbill. This one is much smaller, though, and not quite as colourful. Yet, it is a delightful bird, with a very neat white–and–black feather outfit elegantly spotted and scalloped on the wings. The yellow bill for which it is named is its most prominent feature. Stout and downcurved, it does not have a big casque on top like most other hornbills do; instead, there's just a low ridge.


In larger hornbills, the casque – which in them is hollow – operates (probably) as a resonating chamber to amplify their braying or trumpeting calls. Lacking such a casque, the Southern Yellowbilled Hornbill does not have such a loud call. Instead, it utters a series of clucks and bubbling sounds, starting slow and speeding up towards the end. Breeding pairs will call together, while bowing their heads down and extending their wings. Sometimes an entire family group will join together in displaying and calling. These calls are another familiar feature throughout the Southern African savannah. Of the small hornbills of South Africa, the call of this species is the deepest; other hornbills have higher–pitched clucks, in some species going over into whistles.


The reason this is called the Southern Yellowbilled Hornbill is because of all the hornbills we have down here it is the only one with a yellow bill. In fact in all of Africa, hornbills have red or black bills, only the Pied and Pale–billed hornbills being exceptions – and also, the Northern (or Eastern) Yellowbilled Hornbill, Tockus flavirostris which occurs in northern Tanzania, Kenya, Somalia and Ethiopia. It is a close relative and looks very similar, only differing in having the bare facial skin black instead of pink as in the southern species. (In my painting because of the shadows the only pink you can see is the upper eyelid.)


These hornbills are not at all rare over here. In the Kruger National Park they have become used to people and quite tame. They hang around all the rest camps, snatching tidbits dropped or left by tourists. They'll eat about anything that we do; their normal diet includes mostly insects and other invertebrates, sometimes small vertebrates like mice or lizards, and occasionally fruits and seeds. This hornbill feeds on the ground a lot, hopping about on its short legs. The small African hornbills are the most terrestrial of the entire family. This hornbill will sometimes pursue alates – that is, flying, fertile male–and–female termites – when these emerge en masse as the rains start.


Like other hornbills this one has a unique breeding system. After mating the female imprisons herself in a hole in a tree. This hole has to be fairly deep, but is surprisingly narrow, typically only about half her total length (tail included), and once she's in, she and the male closes up the entrance hole until just a tiny slit remains. They use mud, mostly … other species often use their own droppings as well. The resulting mud wall typically matches the bark so well that it can hardly be discerned from the outside. The slit remaining is just enough for the female to poke the tip of her bill through. She certainly would be able to deal with anything – at worst, a small snake – that can fit through the slit. But should something large successfully break in, there's a safety feature: an opening above the nest and higher than the entrance hole, called a funk-hole, into which the female will then climb up and hide. Similar to Spiderman (or a ninja), clinging to the ceiling as an enemy comes into the room, who then leaves without having seen him. They've of course stolen this idea from hornbills without ever giving them the credit.


Inside, the female moults the long feathers of her wings and tail. In this condition she can't fly at all, but she's safe inside her little prison. She lays her eggs and incubates them, while the male catches food outside and feeds her through the slit. She is utterly dependent on him from this point on.


Up to four eggs are laid, at intervals, so the chicks are not all the same age. The chicks are blind and naked, rather leathery and quite ugly. Now the male has to bring enough food for them as well. When the oldest chick is about 20 days old, the mother will break out of her prison – and then reseal the chicks in it. Her feathers will have regrown by this point. Now she and the male will keep feeding the chicks until they fledge, typically at the age of 44 days. Until then they will lift their butts and defecate through the slit so as not to foul up their temporary home. When they fledge, they break out; younger chicks will keep sealing themselves in again until they, too, are ready. When they are all out, despite being able to fly well, they will still beg food from the parents, who will tolerate this and keep feeding them for a few days longer. Then they will be able to feed themselves. But the youngsters often remain with the parents for a while, forming small family groups. This sometimes helps with defense against predators, which include a number of eagles, falcons, owls, mongooses and even secretary birds.


So, this was one of the tame camp hornbills, that I managed to get close enough to with my old second-hand camera and its antique zoom lens while it perched in a thorn tree. This was an acrylic painting on board … the dove was painted on paper … and you can see the texture. You also see the date after my signature … two years later than the dove! It took me a long time to really get up to speed with the painting.