Willem, formerly known as 'The Return of The Unmentionable Marauding Pillowcase' is a wildlife artist based in South Africa. He says "My aim is simply to express the beauty and wonder that is in Nature, and to heighten people's appreciation of plants, animals and the wilderness. Not everything I paint is African! Though I've never been there, I'm also fascinated by Asia and I've done paintings of Asian rhinos and birds as well. I may in future do some of European, Australian and American species too. I'm fascinated by wild things from all over the world! I mainly paint in watercolours ... but actually many media including 'digital' paintings with the computer!" 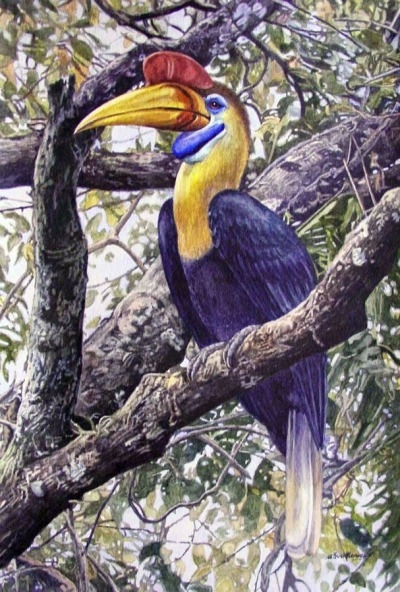 Hornbills occur in Africa and Asia, and are amongst the most fascinating of all birds. This particular species is the Sulawesi Wrinkled Hornbill, which is one of the largest and most colourful of the hornbills. It reaches 80 cm/32" in length, and 2.3 kg/5 lbs in weight.

Let's look at its name! 'Sulawesi' was called 'Celebes' not too long ago. It is a very large island that forms part of the Republic of Indonesia. This island is a veritable treasure-chest of unique living beings, being situated between two major natural regions: the Oriental (tropical south-east Asia) and the Australasian (Australia and New Guinea). This hornbill is part of the Oriental element on the island. Apart from on the main island itself, it occurs on a few small adjoining islands as well.

'Hornbill' is the name for the whole family of birds, and comes from the strange appendage on top of the bill, called a 'Casque'. This hornbill forms part of a group where the casque is ridged or wrinkled, and thus called the wrinkled hornbill. While some other hornbills have large hollow spaces in these casques, which help to amplify their calls, this species doesn't have a comparable hollow casque. Instead, it has a large inflatable pouch on the neck, under the bill, which apparently performs the same function.

This hornbill is also interesting in being one of a number of species that actually uses make-up! Its preen gland (situated at the base of its tail) excretes coloured oils - red or orange, yellow if diluted. It rubs its bill and head all over the preen gland, colouring them in the process!

Like other true hornbill species, when it is breeding time, the female 'imprisons' herself in a large cavity in a tree. She uses her own faeces to seal up the entrance to the cavity, leaving only a small slit through which she can poke the tip of her bill. The male then brings her food while she lays her eggs and broods them and later, the chick or chicks (but usually just a single chick) as well until they are about halfway to fledging; then she breaks out and reseals the entrance, and helps the male to feed the chick until it, too, is ready to fledge and break out.

This species is still widespread and abundant on the island, but they are hunted for foods or for keeping as pets, being as impressive as they are.