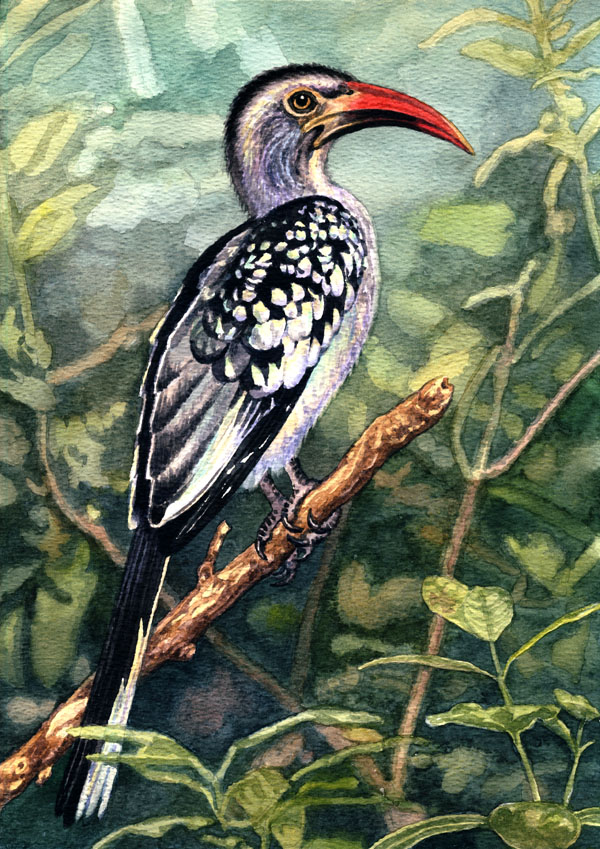 Again I bring you a hornbill! I make absolutely no apologies. I want to feature every hornbill species in the world here, in time! They're simply some of my all-time favourite birds. This one is a Southern Redbilled Hornbill, Tockus rufirostris. It is the smallest of the South African hornbill species, reaching 45 cm/18" in overall length. It has the smallest bill as well, lacking the big 'casque' that is seen on species like the Silverycheeked Hornbill. Instead of the loud, trumpeting or wailing calls of such species, its call is a rapid, clucking call. These hornbills are found in the northern, savannah country of South Africa, being quite frequently encountered in my own province, Limpopo, though not being found around the town of Polokwane. They're most easily seen in the Kruger National Park, where they become very tame and often beg food from visitors. But it's not so good to feed them, actually!

These little hornbills, like some other species such as the ground hornbills, are often found in small groups (but sometimes congregate in large groups in areas with lots of food). These feed close to each other, and will often call in groups as well: one bird starts its clucking call, and the others then join in, synchronising their calls. This is a very characteristic sound of the Lowveld. The call is similar to that of the Yellowbilled Hornbill, but higher in pitch.


The redbilled hornbills are furthermore also frequently seen in the company of the yellowbilled ones. They are very similar in appearance, their plumage being almost exactly the same, but the redbilled ones are smaller and their bills differ markedly. Both species have similar behaviour, eating a variety of foods, from fruit to small animals, mostly invertebrates, and spending most of their time feeding on the ground. They'll sometimes dig in the ground with their bills, or probe into the dung of large mammals. They are the most terrestrial of the 'small' hornbills. They even associate with non-hornbills, as part of the 'bird parties' often encountered in the bush. These are several different species of birds foraging together, comprised of feeders targeting a variety of different kinds of mostly insects. They move methodically through the bush, and apparently benefit each other by feeding together. Insects that escape the one, often get caught by another, and with a variety of feeders they will target from small to large insects and other critters, and at different levels of the habitat, from the ground up to the tree canopy.

The breeding season for these birds start in spring, when the rains return. They form highly loyal couples, the male and female strengthening the bond between them with displays, positioning themselves close to each other, calling in unison while bowing their heads and bobbing up and down, while holding their wings slightly spread out. The male will also give the female gifts, small prey items held in the tip of his bill, which she takes from him with a squawk. This is a ritual that means that he will provide for her.


Redbilled hornbills are similar to the other hornbills in their breeding strategy of imprisoning the females. They will seek a tree cavity with a reasonably small entrance; the female then goes in and she together with the male will close up the entrance with mud and dung, until only a small slit is left, just large enough for her to poke the tip of her bill through. The nest cavity itself is typically deep and narrow, and there is often a large hollow area above the nest entrance; the female sometimes will creep up and hide in this hollow when a predator comes to inspect the nest, thus hiding from it.


Once 'imprisoned' in the hole, the female will lay her three to six eggs, and also moult her wing and tail feathers. She grows fresh new feathers over the time of incubation. The male now become very important, because he brings her, and later the chicks, food. This is mostly large insects and fruits. When the chicks are about twenty days old, the female breaks out and reseals the hole; from this point on, she and the male feed the chicks together until they're fully grown. They will then all break out and leave the nest; they're immediately able to fly. For a while they will hide in the leaves and bushes, then start going out to feed along with their parents. For another six weeks, the parents will sometimes offer food to the kids but they soon learn how to find their own food. They're sexually mature and able to breed by the time the next spring arrives. These hornbills can live to the age of eighteen years.


A Slew of New Species