You will learn to loom knit. Besides, you're tired of the unsightly rings on the coffee table. 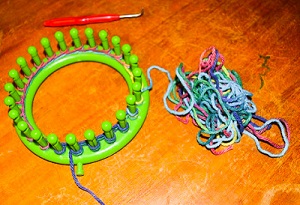 Loom knitting: aka, knitting for dummies. As previously explained, Your Editor can make a Round Thing. The other day, Your Editor learned how to make another Round Thing: a coaster.

'Cool,' was the response of the knitters in the Core Team. 'How did you do that?'

Well, it was what renowned director Kenneth Branagh once called 'a happy accident'. All right, Branagh was referring to the brilliantly claustrophobic scene between Polonius and Ophelia in Hamlet, but we'll take our high-level analogies where we can find them. This accident came about because I had a mistake early on in one of the wash mitts I was making (also a Round Thing, and I'll show you how to make them another time), and I decided to round off this flawed Round Thing before I wasted any more yarn…et voilà! A Useful Round Thing. To wit, a coaster. So, here's how to make it. It won't take long, you'll feel wildly accomplished, and your partner/flatmate will appreciate the fact that you are now housebroken and no longer leave rings on the coffee table.

Assemble your gear. You need what's in the picture: the smallest hoop in the loom knitting set1, a loom hook (that's the orange thing with the pointy metal bit), and some yarn. Not a lot: the scrag end of a skein will do. Now, let's get started. 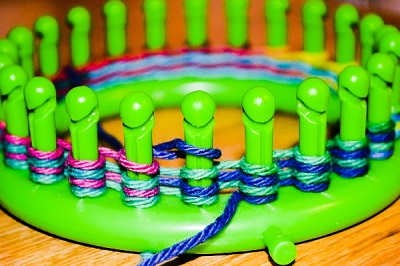 The first step is to ewrap the loom. Aha!, you say. Already with the technical terminology. Worry not. You see this picture? To get these loops, you wrap the yarn inside the hoop, then around the peg, and keep going. Some imaginative knitting geek decided that this 'wrap' looked like the letter 'e' if viewed from above. Go figure. Now, without doing anything else, ewrap the hoop four times. When you're done, seize the end of the yarn firmly about 3-4 inches from the last loop. Don't let go, or you will cry and have to do this step again.

Now, pull all the yarn off the hoop without letting go of your 'place' on the yarn. Done? Cool.

You see that little peg sticking out of the side of the hoop? That's a safety peg. It helps you keep from losing the yarn, and it's a good place marker for rows. Taking the yarn at the place where you have been holding on like grim death, make a slip knot right there. You know what a slip knot is. (If not, look it up. We'll wait.) Put the slip knot over the safety peg and tighten. Now you are ready to begin.

Starting where you made the slipknot, re-wrap the 'tail' of yarn (the part you just counted off) around the hoop. Do this three times. Now, hold the yarn tail in one hand, and reach for the hook. 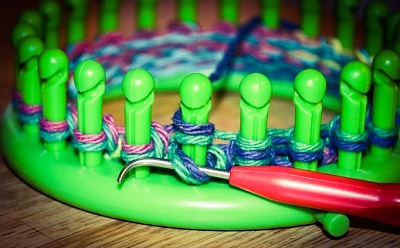 Wrap the yarn over the first peg. Now you have a peg with four loops. Using the yarn hook (pointy side away from you), pick up the bottom two loops. Raise them over the peg. If you have only two loops left on the peg, you're doing it right. Move on.

This 'stitch' is called 'two over two'. Go all the way around the hoop, looping 'two over two', until you're back at the safety peg.

If you've done it right, you now have one row of knitting, a slip knot on the safety peg, and a fairly short piece of yarn 'tail' in your hand. You do? Great. Now indulge in what I call the Gheorgheni Manoeuvre.

The Gheorgheni Manoeuvre is for those of us who are Nervous Nellies when it comes to loose threads. So, necessary or not, experts, at this point I recommend that you release the slip knot and tie it and the yarn 'tail' together. Then, I cut off the excess yarn 'tail'. This way, I know that diabolical yarn won't ever come loose. Not in this world.

Once you've tied it off, you're back to working from the main skein, as it were.

From here on out, it's clear sailing.

When you have two loops on each peg, ewrap once around.

When you have three loops on each peg, add another loop and hook two-over-two.

Do this a total of eight times.

All this hooking and looping is hard work. Maybe you should play some mood music while you work. (We think this guy should meet 2legs.)

Coasting to a Finish 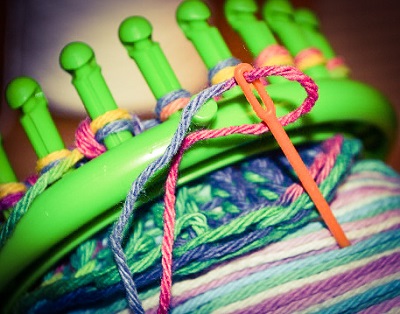 Have you got eight rows? What, you made nine by accident? Go for it. We won't quibble.

Now you must finish off. This is simpler than you fear. First, wrap the yarn from the skein around the outside of your hoop, twice. That's long enough. Cut it off. (Use scissors, and remember to point them away from you. I know who I'm dealing with, here.)

You should have a thing called a yarn needle. It probably came with your knitting loom set. We'll wait while you rummage in the box, find it, and wrestle it out of the plastic packet. Okay, now thread the loose yarn through the needle. What? Far enough so it won't slip back out, but not so far that it gets caught in the stitching. Really, do I have to think of everything? Oh, I'm the instructor, right. Sure, I should do.

Using the yarn needle, loop the thread through the remaining loops of yarn on the pegs, under and over, under and over, until you're all the way around (and two more, for safety, see Gheorgheni Manoeuvre). Don't take the loops off the pegs until you've 'sewn' them all.

Once you're all the way 'round, take the loops off the pegs, gently.

When the loops are all free of the pegs, pull. (Not THAT hard, Spike!) Just hard enough to draw them all together, like with a…er, drawstring. That's it. If you've done it right, you now have…a ROUND THING! 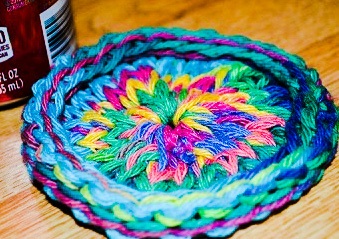 Pull the needle through the (small!) hole in the middle of the coaster. Tie a double knot in it, and cut the excess yarn away. You now have a Coaster. Let me demonstrate its excellent features to you.

The fact that you have used only 'knit' stitch – because you are relying on Gheorgheni, who is a dork and doesn't know how to 'purl' yet –, your coaster has a lovely raised edge to it. This makes it a very nice coaster and deters minor spills.

If you have, like me, used variegated yarn, you have a pretty star-shape in the centre of your coaster. Variegated yarn is a thing. It's this multi-coloured stuff they sell everywhere. It's even cheap. It's dyed a different colour every few inches, and when you knit it, or even loom knit it, it miraculously creates fascinating patterns, because those knitting mavens are COOL. They know stuff like this. Rocket scientists have nothing on those knitting mavens.

Variegated yarn comes in all sorts of colour palettes. Pick one you like, from soft pastels for m'lady's boudoir coasters to loud, brash colours suitable for Mags' game room.

Oh, before I forget: don't use acrylic yarn. For one thing, it costs more. For another, it's not as easy to wash. Use four-ply cotton. It's dirt cheap – even a Yorkshireman would approve. And it just gets better when you wash it.

Make a set for your card-playing friends. Your poker buddies will be astounded, and grateful. And the beer will stay off the card table.

Thank me later – get to work!

1They're available online, or go to a superstore like the one my brother-in-law calls 'Wally World' and ask for directions to the knitting area.