Towel Day was 25 March. h2g2ers celebrated everywhere, as did other hoopy people. Here's where some of the towels went.

Where the Towels Went

First, the two of us ventured out onto bustling Main Street to see if anybody had a clue about Towel Day in small-town Pennsylvania. A lot of friendly neighbours smiled as they saw the towel, but alas, it was not because they recognised a fellow hitchhiker. We got the whole thing in perspective when we ran into a friend, who's a great guy but hadn't heard of Towel Day. He assumed we'd been swimming. Two weeks ago, it was snowing. Today, the temperature was up to an astounding 27C/80F, which the locals mistake for a heat wave. It's supposed to get up to 32C/90F at the weekend. They may all pass out. My towel got into the spirit of Yankee heatstroke by insisting on a rest. We enlightened our friend, and he thought it '42' was a good way to remind people to ask the important questions about life, the universe, and everything. He warned us to keep cool.

At the barbershop we found haircuts, but no enlightenment.

'Never heard of it,' was the barber lady's terse comment about Towel Day. Then she grabbed the clippers and went back to listening to the much more interesting conversation going on in the other chair between a shorthaired, bearded customer and the other lady barber.

That conversation could have taken place anywhere in the galaxy, possibly with more appendages and more imaginative facial hair1. It concerned billiards, obviously a scientific subject. Actually, the man in the chair was talking about snooker, but they call it billiards around here, because they're pretentious. They shouldn't be: 'billiards' is frequently played in Low Dives. From the description of the game, calling this billiards venue a 'low dive' might be overrating it. Before my bushy mane had been shorn into submission, I had learned that the speaker was almost as knowledgeable about bank shots and such as Bluebottle is about the Isle of Wight.

We took our towels away from this uncouth influence and went over to the library to do some missionary work.

The librarian was not doing anything unsavoury. In fact, she was not doing much of anything at all except stapling some papers together. The library was nearly deserted, and it was close to lunchtime. She smiled brightly at us and asked if she could help. I explained our mission. 'Have you heard of Towel Day?' I wanted to know. The answer was in the negative. I sighed, and tried to drum up interest.

Yes, the librarian had heard of The Hitchhiker's Guide to the Galaxy. She had not read it…er, yet. So many books, so little time… I informed her that Towel Day was also about literacy, that h2g2 was for it (so people can read our Stuff). She smiled again, uncertainly. (I think she was uncertain whether to summon help at this point, and I wondered if she had an emergency button under her desk, like the bank does.) I gave up, thanked her, and we left.

On the way out, my towel posed for this picture, just to prove it had been there. Obviously, the Towel Ambassador has her work cut out for her in Pennsylvania.

Superfrenchie with Towel and Unicorn 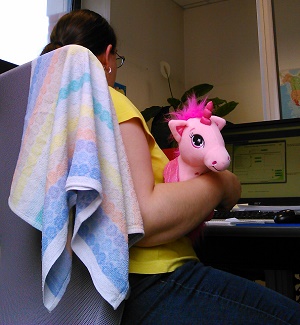 Here's a picture I took at work with my towel and my pet unicorn.

Her name is Sylvie (oh, and the unicorn's name is Hildegarde).

We are pleased to meet Hildegarde, and hope she enjoyed Towel Day, which also seems to have been Bring Your Unicorn to Work Day.

Another Hoopy Towel Use 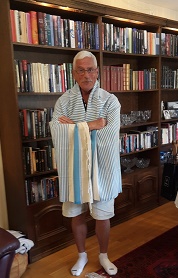 Milla's dad found that not onlycould you wrap your towel around your head to avoid the gaze of the Bugblatter Beast, but you could also drape it over your shoulders as a prayer shawl. We believe Zarquon would approve.

Dad leveled up to 70 on Towel day. So I got him a towel. Only, it's white and blue stripes. And since he's Jew-ish (sorta, in his heart at least2) the first thing he said was "Wow, a prayer shawl!" here he is modelling it.

Where Was Your Towel?

Wherever your towel went, we hope you both had fun. Just think: only 364 diurnal anomalies until the next Towel Day!

1Or tentacles. Or those spiky things. Or whatever.2It's complicated. Aren't all families?