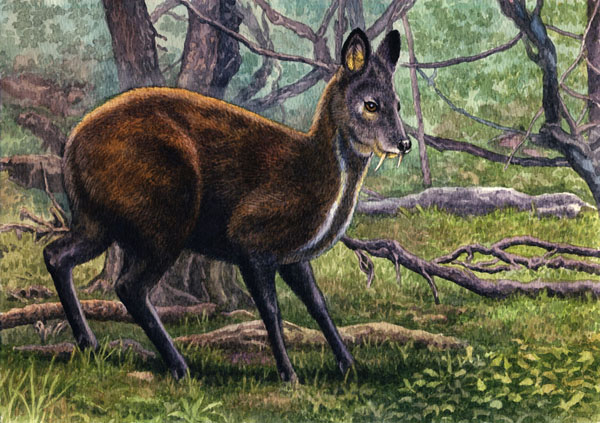 Again I bring you something not South African. This is a Siberian Musk Deer, Moschus moschiferus. No musk deer are known from Africa at all. There used to be musk deer in America and Europe, but today the group is entirely restricted to Asia … indeed, to some of the most inhospitable regions of Asia. The Siberian musk deer occurs in far northeastern Asia: China, Mongolia, Russia, Korea and the Sakhalin Island. It lives in regions of coniferous forest that experience extreme cold in winter. This small, sturdy critter can tolerate these conditions, which is just as well since only the harshness of its environment has saved it until today, since like rhinos and a few other unfortunate species, it produces some substance held in great esteem by humans.

You might guess that musk deer produce musk. The musk made by this little thing comes from a special, unique gland the male has in its underside, and is used for scent marking its territory and attracting females. Humans unfortunately like the smell of this musk as well, and in Asia it is used for scenting all sorts of things, from soap to perfume. It is also used medicinally and various healing qualities are attributed to it. If the musk deer could understand this they would consider it a most unfortunate curse, being burdened with such a valuable thing that their bodies secrete. In China, musk fetches more money, by weight, than rhino horn, gold, or cocaine.


For the sake of this musk, therefore, male musk deer are intensively hunted. Females are often shot too, since they look much like the males. But even so, shooting the males already affects the species badly, since after all the females can't make babies without males. So hunters brave the inhospitable mountains and snowy wastes for a chance of fetching those precious little musk glands.


Actually, it is possible to remove the musk, or even the entire musk gland, without killing or seriously harming the male musk deer. But unfortunately it is still the easiest to just kill them. There are current projects of raising musk deer in captivity, farming them for their musk, but apparently this is not a very good option, since the deer don't breed well or live very long in captivity. I also don't think these wonderful little things should be kept in cages. Maybe some day an artificial musk could be produced with the same qualities, and that will actually satisfy the humans who want it … but because of a matter such as tradition, this would likely be a hard sell.

But aside from this musk, the musk deer are extremely interesting animals. The 'deer' in their name is not quite accurate: they are not particularly closely related to deer. Indeed they are as close, or maybe even closer, to the antelopes, cattle, goat and sheep family, the Bovidae. They are in many ways primitive or conservative. The earliest musk deer fossils are known from the Oligocene epoch, about 30 million years ago, and were already very similar to living musk deer. Generally speaking, musk deer are small and compact in body, reaching about 70 cm/28" in shoulder height, and a bodyweight from 7-17 kg/15-37 lbs. They have very short tails, and no species is known to have grown antlers like those of true deer, or horns like those of antelopes.


Musk deer are further distinguished from true deer by not having facial scent glands, using their musk glands instead, in addition to urine and droppings, to mark their territories. Apart from the musk gland, the male musk deer also possesses sabre teeth. Regular readers of my column will remember that I've already covered several other sabre-toothed species, living and ancient. And these were not (yet!) the actual sabre-toothed cats! Instead, most owners of sabre teeth are actually herbivores. Musk deer are similar to chevrotains in many ways, but more advanced, being true ruminants (cud chewers) like the majority of even-hoofed mammals today. Many ancient ruminants also had the sabre teeth, even ones with horns like Ampelomeryx. Today, a couple of species of true deer, and also the muntjacs, have similar sabre teeth.


The fangs of the male musk deer can reach 7"/18 cm in length. They actually grow throughout life; their tips often break off when they become too long. Not having horns or antlers, the musk deer use these for defense, and the males may also bite each other while fighting for females.


Very little of the musk deer's way of life has been studied. Most people who brave the terrain where they occur are interested in killing rather than observing them. They've become extremely wary and flee if they even suspect humans of being around. They eat leaves from a variety of shrubs and plants occurring in the coniferous forests, and also mosses, lichens and fungi. We know little about their breeding behaviour, except that the newborn fawn is tiny, and hidden away by its mom for the first part of its life. Adult musk deer live singly or in pairs, rather than herds, and are territorial. They likely have large territories, since their environment has little available living resources. Males often gather branches and other objects, arranging them into a circle before marking them.


Today, six or seven species of musk deer are recognized. This is the most widespread of them; others are confined to smaller regions, many of them around the Himalaya Mountain range from Afghanistan eastwards. They vary little in outward appearance, all having dark brown, grey or blackish fur, short but dense. All musk deer species are seriously endangered. Apart from the musk trade, they also suffer because of the forests they live in being destroyed.