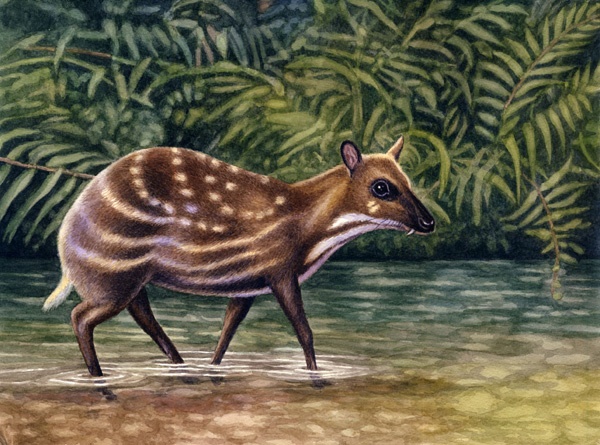 Today's animal is not at all well-known! This is a Water Chevrotain, Hyemoschus aquaticus. The name 'Chevrotain' means 'little goat' in French. But chevrotains are not goats, nor at all closely related to goats! They're very enigmatic mammals, today found in Africa and Southeast Asia. Millions of years ago, they were much more widespread and diverse, being found in Europe as well. The water chevrotain only occurs in equatorial Africa, in the moist rainforests. As its name suggests, it is always found close to water. It is the largest of the living chevrotains, but even so, it is small for a hoofed mammal, reaching 40 cm/16" at the shoulder and a weight of 12 kg/26 lbs.

Although chevrotains look like small deer or antelopes, they are quite different from them in many ways. Indeed, they are very similar to the ancient precursors of the modern horned, hoofed mammals. They themselves don't have horns or antlers, but do have much elongated canine teeth! Those of the males are the longest and sharpest, and protrude from their mouths when closed like those of sabre-toothed cats. They use these for self-defense as well as for territorial combat between rival chevrotains. Male chevrotains fight standing parallel to each other, facing in opposite directions. They then strike at each other sideways, opening their mouths wide. They try to slash at each other's backs, necks and sides with their viciously sharp sabre teeth. For protection, chevrotains have very thick skins on these parts. It still happens that males sometimes seriously wound or even kill each other.


The absence of horns, and the presence of fangs, are not the only 'primitive' features of chevrotains. The 'advanced' horned and hoofed mammals all have complex stomachs, with four chambers, for efficient digestion of their plant diet. Chevrotains have more simple stomachs, and less efficient digestion. To compensate, they eat very digestible food. Instead of tough grasses or leaves, chevrotains live mostly from fallen fruit that they seek out on the shady forest floor. They also eat the softer, more digestible kinds of leaves, as well as flowers, seeds and fungi. They even occasionally catch insects and other invertebrates, and even small birds and mammals. They'll feed on carrion if they can get it. Chevrotains extract a lot of water from the food they eat, leaving behind rather dry droppings. Still, they need a lot of water, especially the water chevrotain. They also need access to high-quality food year-round, and are absent from forests that are seasonally dry.


In many ways, chevrotains are intermediate between pigs and the horned hoofed mammals. Their stomachs and general shape is pig-like; their feet, too, are four-toed with small hooves, and look like the trotters of pigs. They only don't have the specialized flat snouts of pigs. They're reminiscent of the peccaries, the pig-like animals of the New World.


Still, although chevrotains have many features that seem primitive, in having barely changed from the ancestral forms of hoofed mammals living forty to fifty million years ago, they should be considered successful, modern mammals. They have found a niche in which they function well: small, swift animals of the forest understory. They have fine senses – large eyes to see in the gloom, and a keen sense of smell for finding food. They are agile and even able to climb into trees and bushes, although they don't do this much. The water chevrotain's dappled coat camouflages it well amidst the leaves and spots of sunlight in the understory.

The water chevrotain has a special strategy to keep itself safe. When it senses danger, it will first freeze and try to avoid being spotted. If this fails, however, it will rush to the nearest water and dive in. It can swim underwater for a considerable distance, and will seek out aquatic vegetation in which to hide, or surface hidden underneath an overhanging riverbank or the roots of a riverside tree.


What is interesting about this semi-aquatic behaviour, is that this might demonstrate how hoofed mammals could have evolved into whales! Today it is recognized that whales and dolphins are actually the descendants of hoofed mammals. One possible whale ancestor was Indohyus, known from India and Pakistan, a quite chevrotain-like and unspecialized small, hoofed mammal. It is quite possible that this mammal also took to water to hide out in; from there, the animals might have started to forage in the water, becoming more and more aquatic from there on. I hope to soon write an article about the fascinating story of whale evolution.

The life of a chevrotain in many ways is similar to that of a small carnivore rather than an herbivore. They don't form herds, instead living solitarily. Males as well as females stake out and defend territories. Indeed, males often have territories that don't even border those of others, but are up to several kilometres apart. Thus they occur at very low densities. A male usually has two or more females in its territory; females are more tolerant of each other and sometimes their territories overlap.


Chevrotains use a variety of signals to communicate. Their short tails have white tips and undersides, and when twitched flash conspicuously in the gloom. They have scent glands on their chins, but it is not known how much they mark their territories with these. They utter a variety of calls: barks, screams, bleats and chattering noises. Males and females come together to mate; typically only a single baby is born, staying hidden during the day with the female coming to suckle it. It is weaned at the age of about nine months, and full adulthood is reached at the age of two years. Chevrotains can live for thirteen years, but in the wild rarely make it beyond the age of eight.


Unfortunately, chevrotains all over the world are threatened. Humans keep destroying the equatorial forests in which they live. Also, especially in Africa, there is a massive trade in bushmeat – animals indiscriminately trapped or shot in the forests and sold as food in small markets. Chevrotains often end up in these markets. They will also leave forested areas that are disturbed by humans, even if not completely destroyed. The water chevrotain is given nominal protection in Africa, but this doesn't help it much. Because of its dispersed, low-density occurrence, it can only be saved through widespread conservation of large tracts of pristine equatorial forest. But this strategy would also save a wealth of other amazing rainforest animal and plant species!