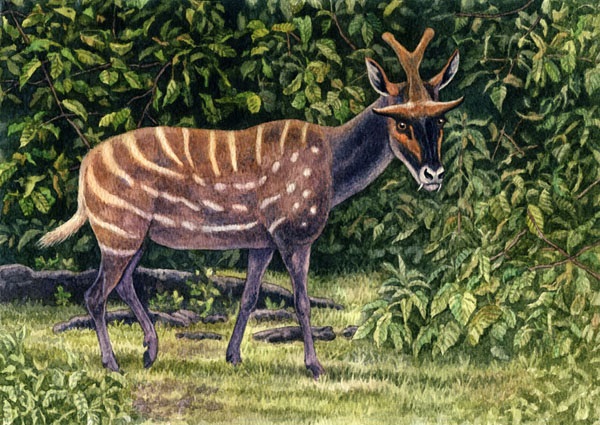 Time for another Prehistoric Special! This animal is indeed a special one. This is Ampelomeryx ginsburgi, to give it its official name. It can in plain English be described as the Slingshot-headed Sabre-toothed Giraffe Deer. That's what it was, basically! It is an ancient thing, living between 20 and 15 million years ago, in Europe. Good fossils of it have been found in France (and there's even a French wine named after it). That was close to the time the first of the true giraffes were evolving, also around southern Europe. But Ampelomeryx was not a true giraffe. It belonged to a family, the Palaeomerycidae, that's now extinct. This family was close to giraffes and also to deer and to pronghorns. The two horns Ampelomeryx had over its eyes were quite similar to the short horns or ossicones of modern giraffes; they were even more similar to the sideways-pointing eyebrow horns of some extinct giraffes like Georgiomeryx, Canthumeryx and Injanatherium. But its single, central, flattened, backward-pointing horn, forking at the tip to look like the letter 'Y' or a slingshot, was a feature unique to it and a few close relatives.


These horns of Ampelomeryx couldn't have been very functional in a direct way. Neither the sideways brow horns nor the Y-shaped horn on the back of the skull was very sharp or strong. Indeed these horns were probably not covered in hard, horny sheaths like those of antelopes, but might have been covered in skin and fur instead, like giraffe horns (called ossicones). They would have rather been used in aggressive but not deadly contests between males for territory and females. The sideways-pointing horns could have been used in side-to-side shoving matches or knocking their heads together, like in the modern giraffes. The Y-shaped horn was so positioned that it wouldn't have been easily directly functional, so it was probably used more as a visual signal. Bobbing or twisting the head could have been used to call attention to this feature.


So, with the horns not very directly dangerous, Ampelomeryx had to have some other way of defending itself. That's where the teeth come in! Massively sharp, curved fangs are actually not such a strange thing for a hoofed mammal to have. Even today there are species of deer with small or no antlers, that have sabre-teeth to defend themselves with; the musk deer (actually not deer but a different, related family) have them too, as have the chevrotains. In all these species, the fangs take on the role of defensive weapons. So these were actually just about Ampelomeryx's most 'ordinary' feature!


The palaeomerycids included a few more weird-horned species, such as Triceromeryx and the recently described Xenokeryx. In Africa, the butterfly-horned Prolibytherium might also have been a palaeomerycid, or in a related family, the Climacoceridae. In North America a similar group was the Dromomerycids, for long considered members of the same family, but now believed to be closer to deer than to giraffes. These also had fairly simple paired bone horns over the eyes, and a few had single horns growing from the back of their skulls. Both the dromomerycids and the palaeomerycids died out towards the late Miocene to early Pliocene epochs, probably because of being outcompeted by the true deer and the antelopes.