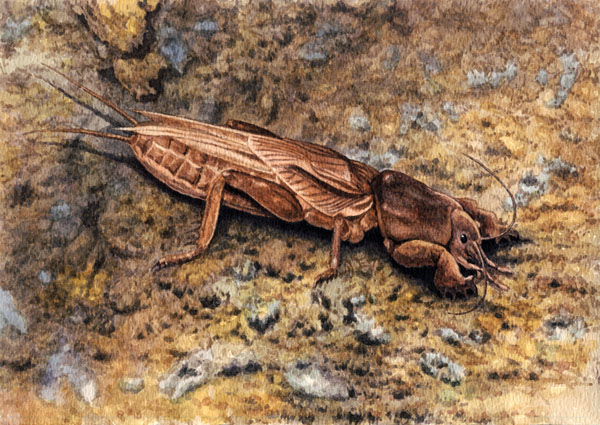 Time for another invertebrate! I seem to be stuck on crickety critters. This is an African Mole Cricket, Gryllotalpa africana. This one's scientific name translates as almost exactly its common name – 'African cricket mole'. Of course it's a cricket, not a mole, just mole-like because of its lifestyle! This is a sturdy little cricket, though just about 3 cm/1.2" long, but with very powerful forelegs. I remember them from way back when I lived in Pretoria. One came into the house and my dad explained to us what it was. I found it fascinating! If you hold it in your hand, it will use those strong forelegs with the mole-like claws to try to pry your fingers apart so that it can escape! The 'hands' have finger-like extensions, but these are nothing like the fingers of vertebrates; they're extensions of the hard outer cover (exoskeleton) that protect the forelegs. The skeleton of the torso is also very tough and hard, but that of the abdomen is softer. Like those of other arthropods, the muscles are inside this hard shell. It hurts a bit when the cricket tries to force its way out of your hand, but not much. Some people think this cricket can give a painful bite, like the Parktown Prawn, but it can't, having much smaller and weaker jaws. Some people even believe it can sting, because it has two sharp pointy-things, called cerci, on its backside, but these are soft and just used for feeling. Mole crickets eat plant roots, and are harmless to humans.


Crickets of the Underground

Mole crickets have a vast distribution but there are not many species. The African Mole Cricket occurs over most of the continent. It occurs over the entirety of South Africa, from the driest deserts right into the moistest forests! But everywhere it needs moist soil, and therefore in dry regions is only found in permanently moist spots such as riverbanks. It is adaptable and commonly occurs in gardens. It can be a minor pest, mainly occasionally spoiling bowling or golf greens, and may mar the immaculate appearance of a lush lawn. If your lawn is rather untidy like mine, no-one will see the difference! Mole crickets don't occur in vast numbers, and are kept in line by insect-eating birds like Hadeda ibises. They don't really have defenses. Their hind legs are not as long and strong as those of some other cricket and grasshopper species, and only have a few weak spikes on them. They can fly quite well though.


Like other crickets, mole crickets make sounds using their wings. If you look at my picture, you'll see that the forewings are pretty small, only extending about halfway down the abdomen. The hindwings, used for flight, are folded in underneath the forewings, but the long tips stick out well beyond. The forewings have 'files', strips with many evenly-spaced ridges, on their surfaces. The cricket rubs the forewings over each other, these 'files' rasping and the ridges cross each other, and this makes a buzzing sound. It is the male who calls, sitting in the front 'parlour' of his burrow, offset from the main tunnel (up to 1 m in length), which amplifies the sound. The buzz goes on uninterrupted for a long time, and can be difficult to locate.


Female mole crickets mate with the males and then lay their eggs in a nesting chamber at the end of their burrow. The babies go through 10 larval stages before reaching adulthood. They don't go through as extensive a metamorphosis as butterflies, beetles or bees, the baby crickets looking much like the adults apart from lacking wings. They also don't make pupae, but go through a series of moults, the final one culminating in the adult form. The full process takes two years to complete.


In spite of the unobtrusive underground lifestyle of this cricket, it is often seen above-ground. It flies around at night and is often attracted by the lights in people's homes. If they can enter they will land and scurry about the floor, frustrated by not finding suitable soil to live in! They give some people the heebie-jeebies, such as my sister and some of my art class friends, who will run away from it as from a spider or snake! But I feel this species is misunderstood, being simply a mostly harmless little insect with a quite fascinating level of adaptation to its burrowing lifestyle.