March is Irish literature month at the Post. We've mentioned Lady Gregory and her plays. Now, you probably think of William Butler Yeats mostly as a poet – and a great one he was, at that – but he wrote plays, too. This one, The King's Threshold, was published in 1904, and it was written for the Irish National Theatre.

This is just the prologue, but we bet it makes you wish you could see the play, doesn't it? If you find a video, let us know. 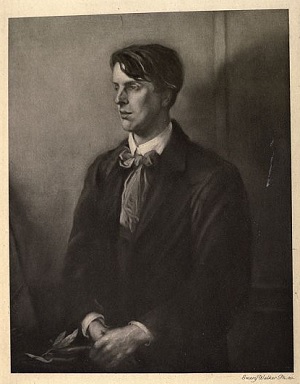 An Old Man with a red dressing-gown, red slippers and red nightcap, holding a brass candlestick with a guttering candle in it, comes on from side of stage and goes in front of the dull green curtain.

I’ve got to speak the prologue. [He shuffles on a few steps.] My nephew, who is one of the play actors, came to me, and I in my bed, and my prayers said, and the candle put out, and he told me there were so many characters in this new play, that all the company were in it, whether they had been long or short at the business, and that there wasn’t one left to speak the prologue. Wait a bit, there’s a draught here. [He pulls the curtain closer together.] That’s better. And that’s why I’m here, and maybe I’m a fool for my pains.

And my nephew said, there are a good many plays to be played for you, some to-night and some on other nights through the winter, and the most of them are simple enough, and tell out their story to the end. But as to the big play you are to see to-night, my nephew taught me to say what the poet had taught him to say about it. [Puts down candlestick and puts right finger on left thumb.] First, he who told the story of Seanchan on King Guaire’s threshold long ago in the old books told it wrongly, for he was a friend of the king, or maybe afraid of the king, and so he put the king in the right. But he that tells the story now, being a poet, has put the poet in the right.

And then [touches other finger] I am to say: Some think it would be a finer tale if Seanchan had died at the end of it, and the king had the guilt at his door, for that might have served the poet’s cause better in the end. But that is not true, for if he that is in the story but a shadow and an image of poetry had not risen up from the death that threatened him, the ending would not have been true and joyful enough to be put into the voices of players and proclaimed in the mouths of trumpets, and poetry would have been badly served.

[He takes up the candlestick again.] And as to what happened Seanchan after, my nephew told me he didn’t know, and the poet didn’t know, and it’s likely there’s nobody that knows. But my nephew thinks he never sat down at the king’s table again, after the way he had been treated, but that he went to some quiet green place in the hills with Fedelm, his sweetheart, where the poor people made much of him because he was wise, and where he made songs and poems, and it’s likely enough he made some of the old songs and the old poems the poor people on the hillsides are saying and singing to-day.

[A trumpet-blast.] Well, it’s time for me to be going. That trumpet means that the curtain is going to rise, and after a while the stage there will be filled up with great ladies and great gentlemen, and poets, and a king with a crown on him, and all of them as high up in themselves with the pride of their youth and their strength and their fine clothes as if there was no such thing in the world as cold in the shoulders, and speckled shins, and the pains in the bones and the stiffness in the joints that make an old man that has the whole load of the world on him ready for his bed.

[He begins to shuffle away, and then stops.] And it would be better for me, that nephew of mine to be thinking less of his play-acting, and to have remembered to boil down the knap-weed with a bit of three-penny sugar, for me to be wetting my throat with now and again through the night, and drinking a sup to ease the pains in my bones.

[He goes out at side of stage.]