They came, they saw, they reenacted. And the Post was there.

A Report on the Latest Nastynesse in North America, by Ye Post Correspondente for Warre

There was peril in ye Pennsylvania Forest on Saturday, ye 17th of June ult. Alas, oure British Regulars and their Militia and Indian cohorts were roundly defeated in a skirmish upon Black Beare Trail in ye Forest of Cook, nigh the river the local Scots Irish do call Stump Creek1. To make ye Publick acquainted with the manner of Country oure Boyes do encounter on the Frontier, & to sette ye scene properlee, youre Correspondente for Warre will relate what the Daye was lyke, and what transpired in ye Weste of Pennsylvania. 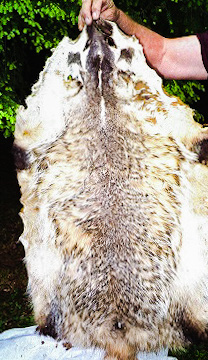 Midafternoon it was when youre Correspondente did venture into ye Forest of Cook, along with some friendly local Folke, for to sample the goods of ye Market. There were many fine skinnes on offer – indeed, ye Trappers do make a goodly living thereby. Particularly attractive were the badger skinnes, whyche were on offer. Had ye Post payed better, youre Correspondente had bought one for 2legs, who, as is well known, dearly loves the badger in all his moods. Alas, lack of funds limited the Purchaser to a horn spoon, quite beautiful and smooth, with which to eat soup, as well as a pottery jug of sturdy craftsmanship. 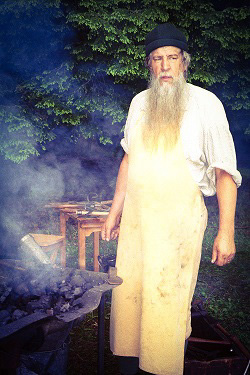 My friends & did next come upon ye Blacksmith, a doughty man and highly skilled in demonstration. Whych hardly surprises, when one reflects that he is a retired teacher of Science from ye local Schoole. With suche talented People, it is self-evident that ye Colonies will soon be a going concern – if only ye pesky French can be controlled.

Ye Regular troops were a-drilling upon the Greene, near the large water tower, and good it did oure Hearts to see them. Their practice Cannon made a satisfying Roare. 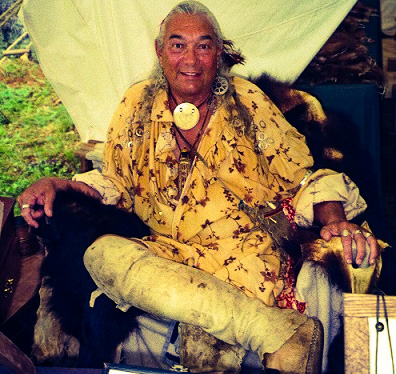 I would fain venture into ye Foreste to see more, but first, I did consult with a local Indian, of the Melungeon tribe, as he told me. This venerable sage did warne me of impending trouble in ye Foreste, a fact I soon found confirmed by the announcement over ye Loude Speaker that, ' ye Surprize Attacke will take place on schedule at 4 pm.' So we hastened thither.

Ye Woods thereabout are in very deed dark, foreboding, and thoroughly atmospheric. Here, truly, is the Foreste Primeval, with murmuring pines and hemlocks. Only today, ye murmuring was drown'd out by ye Roare of French Cannon and ye blood-curdling Shrieks of ye Indians. 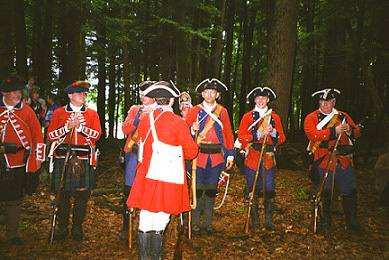 Alas! Our poore Soldiers do not always fare well in Penn's Woods. Yure Correspondente did pass right by some stout British Regulars as they approached ye fateful Spot on Black Bear Trail. The Soldiers were joking – to keep their spirits up, I doubt not – and speculating as to how they should comport themselves in the coming Affraye.

'Now listen, ' sayde one, 'I'm going to die in the first volley, so I'll fall down in front of you. Be sure to step over me.'

The first rolled his eyes. 'George,' he said patiently. 'I weigh more than you do.'

Clearly, the day was not going well for oure Regulars. A shame it was, for it had rained heavily, and ye Grounde was very muddy.

'Crack!' Thus began the rifle fire, which soon enveloped ye Foreste in a deep cloud of thicke Smoke, the stench whereof was quite overpowering at times. So hardly can one see at such at time that one is moved to wonder if this, indeed, is what the Commentators mean when they do speak of the 'Fogge of Warre'. For foggy it was indeed, there in the deep Foreste.

'BOOM!' Thus went the French Cannon, which, for all they be smalle, and easily conveyed across the mountainous Countryside, yet are they powerful enough, and do make such a Din as to cause one to hold one's Eares and almost drop one's Camera. And yet there were some younge Boyes who happened by and demanded to help with loading one of the small Monsters. This they were permitted to do, under supervision – but only before true Hostilities had begun. After this, they were safely returned behind ye Yellow Tape to their Guardians.

Fierce fighting could be observed among the trees beyond ye Yellow Tape, and hair-raising Yells from Indians and ye Scots Irish. Alas for ye Scottish troops: ye Piper fell dead, though not before carefully noting where he fell, so as not to sully his instrument. A true Piper in ye grand Tradition, and will be missed, as will the gallant British Troops who fell decoratively in ye Foreste. We shall not see their like again…

Until 11.30 am the next morning, when the Whole Troop will reenact another Skirmish.

This Seneca warrior was proud of his paint, and gladly posed.

Fact and Fiction by Dmitri Gheorgheni

1And which now rejoices in the much more melodious name of Clarion River.