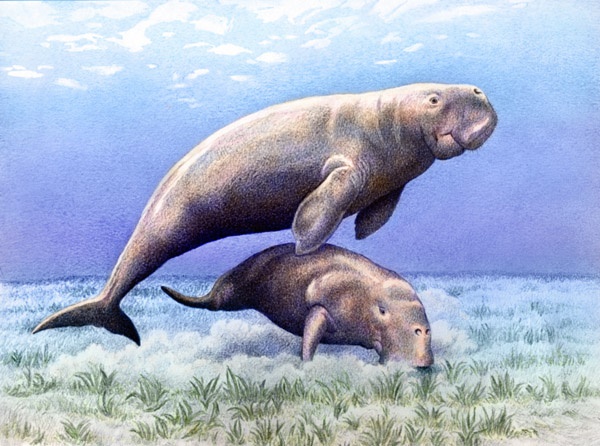 Something rather different this time! These are Dugongs. The Dugong, Dugong dugon, is a large marine mammal, occurring off the eastern coast of South Africa as well as along coastlines over the Indian and Pacific oceans. Its name comes from the Malay 'duyong' which means 'lady of the sea' (see 'Mermaids?' below). Like whales, dugongs are completely adapted to life in the ocean, and are utterly unable to leave the water to come onto the land. Like whales, their front feet have been transformed to flippers, while their hind limbs are completely gone (except for tiny bone remnants embedded deep within their bodies). Their tails have become tipped with broad flukes, with which they swim. They don’t use their front limbs for propulsion, just for steering and stabilisation while swimming. There is just the single species of dugong in the world. Dugongs are related to manatees, which tend to live in rivers rather than the ocean. There used to exist a huge relative of the dugong called the Steller's Sea Cow. This weird creature lived in the northern Pacific ocean. Discovered by Europeans in the eighteenth century, it was already rare, and went extinct only thirty years later.


Cows of the Ocean

Dugongs themselves are very much the marine equivalent of cows. They are large-bodied, typically reaching a length of 3 m/10' and a weight of 400 kg/880 lbs, with a maximum length of 3.65 m/12' and a weight of 675 kg/1485 lbs recorded. They are tranquil in demeanour, and slow-moving, reaching a maximum swimming speed of 10 kph/about 6 mph. Dugongs are related to hoofed mammals. Their closest living relatives are elephants as well as hyraxes and aardvarks. The earliest known dugong ancestors were long-bodied with short, stout limbs, quite capable of walking around on land as well as wading in shallow water like hippopotami. The dugong betrays its relationship to elephants in its skull and face. Although they're not visible from the outside, a dugong male grows a pair of tusks similar to those of an elephant. They reach about 30 cm/1' in length. The cheek teeth of the dugong also resemble those of elephants in the way they're replaced, new teeth moving from the back of the jaw to the front, the teeth falling out at the front as they are worn out. Dugongs chew not only with their teeth, but also with their tough gums. The front of the dugong's snout is made up out of a pair of huge, thick, flexible lips, like a very much shortened elephant's trunk. Its nostrils are not at the tip of this snout, though, but at the top of its skull. Unlike other marine mammals, the dugong can't close its nostrils while it's underwater, but can pinch shut the nasal passage behind the nostril. Dugongs have very small eyes, without any eyelids. They do have a transparent nictitating membrane protecting them, which is copiously lubricated with oil from glands. Another interesting thing is that dugong eyes lie entirely outside of their skulls and not in sockets; they are so small that they are only embedded in the thick outer layer of the skin covering a dugong's head.


The front of the dugong's snout is covered in thick bristles. It uses these to feel around the seabed as it grazes. Dugongs eat 'sea grasses' … actually not true grasses, but members of a couple of marine-adapted flowering plant families, the Hydrocharitaceae and the Potamogetonaceae. These plants grow in warm, shallow ocean water, where enough sunlight penetrates and where offshore reefs break the force of the waves. This way the wave action doesn't disturb the sediment on the seafloor, allowing the plants to root and grow. They form extensive underwater meadows in some places.


It is on these meadows that the dugongs graze. These being fairly shallow, the dugong doesn't need to dive down very deep. Being a mammal, it can't breathe underwater. Dugongs can hold their breath for about seven minute, but prefer to come up for air every three minutes or so. For the three minutes that it is underwater, the dugong grazes, moving forward in a straight line. It touches its stubby flippers down to the sea floor, 'walking' forward on them as it feeds. Using its mobile lips, the bristles giving it a good grip, it uproots the sea grasses. It shakes them off just before ingesting them to get rid of mud and sand. Sometimes it stacks the grass in small piles on the seafloor for a while, letting the sediment wash off, before eating them. The activity of the dugong itself tends to stir up a cloud of fine sediment, which soon settles though. Like many grazers of the land, dugongs are herd mammals, occurring in groups of six to thirty members but sometimes gathering in much larger numbers. From above the surface, the dugongs and their straight, mud-cloud trails can easily be seen through the calm, clear water. After they've grazed, the furrows through the meadows remain, being straight lines 3 to 8 m/10-27' long and 20-26 cm/8-10" wide.


The dugong's food plants need very salty water, and actually die out around river estuaries when, as a result of high rainfall over the land, there's an influx of fresh water into the ocean. In such cases, dugong herds may die if they're unable to move to undisturbed feeding areas. Dugongs are also vulnerable to humans, who hunt them in many regions, their meat being tasty. In areas where they are preyed on by humans, dugongs tend to feed during the night, resting in protected spots during the day.


Dugongs mostly stay in shallow water, 10 m/33' or less in depth. In areas where the continental shelf slopes down at a shallow angle they can sometimes be found far from the shore. They will also occasionally feed on deep sea grass which grow at a depth of up to 37 m. They will also occasionally feed on seaweed or algae. In some regions, dugongs will eat animals, ingesting shellfish, sea squirts, jellyfish and other invertebrates, especially if there's not enough sea grass available.

Many people believe that dugongs inspired the legends of the mermaids. They can't really be called beautiful, but from a distance, dugongs may give the impression of humans with fish tails. Their short, round heads are rather more human-shaped than those of whales or dolphins. They have a tendency to peek out of the water, holding their bodies vertically. Dugong females have a single pair of breasts that are between their front flippers, this being a quite human-like configuration. (But this is similar to the case of elephants, who also have a pair of breasts between their front legs.) Lastly some people think that female dugongs might on occasion collect a bit of seaweed on their heads. So imagine a female dugong with hair-like weeds on top of her head, rising up out of the ocean till she exposes her breasts, and peeks at the human crew of a bypassing ship. It's not too much of a stretch to imagine these men being fooled into thinking they're glimpsing an aquatic humanoid, is it? Based on this, the order that includes the dugongs (as well as the manatees and extinct sea cows) is called the Sirenia, after the Sirens of Greek legend (who are sometimes portrayed as mermaid-like although they're sometimes also described as a bird/human mix).

Not much is known about how dugongs reproduce. The courtship seems to include the male nibbling on the female's neck and back; males may fight with each other, inflicting injuries with their tusks. Mating is done in the water, and is sometimes said to be belly-to-belly, the dugongs 'standing' vertically in the water. Gestation is about a year, and a single calf is born, very rarely twins. The calf is born with a sparse covering of hair, which fall out as it grows. The mother holds it to her chest when it suckles. At first, the calf swims just using its front flippers, holding its fluked tail curled beneath it; later it starts to use its tail for propulsion. Dugongs reach maturity at the age of about eight to eighteen years. They can live for seventy years or more.


Dugongs (as well as all species of manatee) are in trouble world-wide. They are very negatively affected by humans, not just through direct hunting, but through disturbance and getting tangled in nets. They would also suffer greatly from global warming causing the destruction of coral reefs, ending the protection of their shallow sea grass meadows. All in all they are in great need of our protection, indeed of our environmental wisdom and responsibility. The dugong is the single remaining member of its family and a very unique creature which surely would be a great pity to lose.