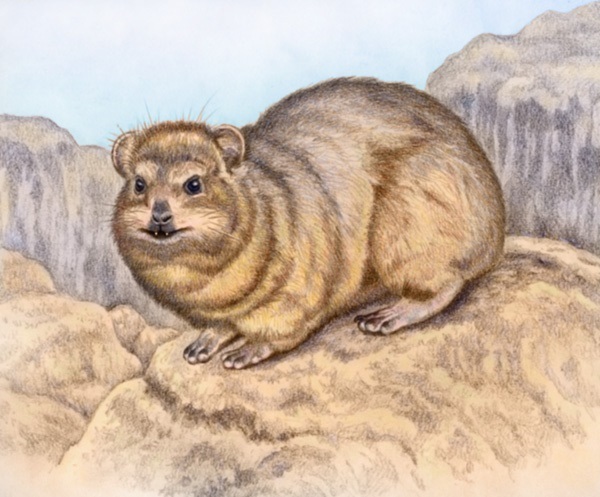 I've already featured tree hyraxes here, but this time I feature their close relative, which is far more commonly seen here in South Africa, the Rock Hyrax, Procavia capensis. In Afrikaans we call this a 'dassie' which means 'small badger' although they are not particularly badger-like. In my tree hyrax article I go into the uniqueness of hyraxes, so in brief let me just repeat the basics: hyraxes are hoofed mammals although their hooves have been reduced to blunt nails; they're said to be relatives of elephants, which isn't entirely accurate … they are very distantly related to elephants and also dugongs and manatees, but they are unique enough to be placed in an order of their own; they used to be more diverse in the past, with both very small and very large species, all living in Africa and the middle East; they have dwindled as a result of competition with more efficient hoofed mammals like zebras and antelopes, and today survive only by living in habitats that other hoofed mammals have difficulty accessing, such as in trees or on rocky hills. Hyraxes are about the size of rabbits, their small size and low dietary requirements enabling them to survive quite easily in regions with limited resources.


So, while the tree hyrax is the one which adapted to living in trees, rock hyraxes are superbly adapted to living on rocky hills. These hills can be found over much of sub-Saharan Africa, jutting out from flat plains covered in grass or open savannah. They are pieces of resistant rock that have remained standing while the softer rocks eroded around them. These rocky hills are refuges for plants and animals. Bush or grass fires often fail to spread up their slopes, and similarly, trees and shrubs sheltered between rocks have access to water that trickle into cracks and crevices. Large grazing or browsing animals may have difficulty climbing the steep rocky slopes, so sparing the vegetation growing on them. The nooks and crannies between the rocks also act as traps for fallen leaves and branches, soon forming pockets of nutritious compost. For these reasons, rocky hills can have dense thicket growth or even forest trees, islands of lushness amidst the surrounding arid grassland or savannah. The tree, shrub and other plant species found on the hills will be entirely different ones from those growing on the open plains. There will also be great differences in vegetation between northern and southern slopes, between those that are exposed versus ones that are sheltered from sun, wind and rain, and between spots with very shallow soil over hard rock versus spots with deep, fertile soil.


Similarly, the hills will have unique populations of animals. The rocks and crevices shelter many kinds of reptiles. A big rock on a sunny slope (northern slopes in the southern hemisphere, southern slopes in the northern) is excellent for a lizard to bask on early in the morning, to warm up for the rest of the day's activities, while a rock crevice provides excellent protection. Hyraxes are the same! Although they are mammals, their internal temperature control is not as efficient as those of the larger herbivores of the plains. They, too, take advantage of the sun in the early morning and on cold days you can see them stretched out, basking on big rocks or boulders. On very hot days, however, it is far too hot in the open, and then they seek the cool shade of crevices, rock overhangs or small caves to shelter in. These same caves and crevices are refuges that they flee to when predators approach. Again, their small size and short legs mean that they can't easily run away like the larger mammals of the plains. But on these small, rocky hills, shelter is always close at hand.


Hyraxes do often venture a short distance away from their homes in the hills, going into the plains to graze or browse. But in times of food scarcity they can go on long excursions to try and find new habitat, making journeys of as far as 20 km/12.5 miles over flat, open ground. But they are superbly adapted to their hills. I know them very well and see them frequently here around Polokwane, where there are many rocky hills. The rubbery soles of their feet are moistened with sweat as well as glands secreting a sticky stuff, which gives them a grip on the rock surfaces. They have long whiskers and tactile bristles on their heads, allowing them to get a feel for their environment. They are extremely agile. I remember once seeing a hyrax fleeing down a deep, narrow ravine by bouncing from the one rock wall to the other and back, all the way from the top to the bottom! Their compact bodies don't injure easily, and they can survive falls from a great height. Their round shapes provide camouflage: when sitting still on rocks and boulders, they look like smaller boulders themselves.


The rock hyrax is adapted to dry regions and can eat tougher, coarser vegetation than the tree hyraxes. This means grass! Grass is not the easiest of foods, containing silica crystals that blunt teeth, and hard cellulose that is difficult to digest. Hyraxes take bites of grass using their cheek teeth. Their very sharp, pointy front teeth or incisors, although similar to the gnawing front teeth of rodents, are not used for feeding at all. Instead, hyraxes use the front teeth for fighting, self defense, and grooming their fur. When they feed, they pull their lips back so they can bite their food off with the cheek teeth. Rock hyraxes have deeper cheek teeth than other hyraxes, to allow them to properly chew the tough grass leaves and stems. They will also browse shrubs and herbs. Rock hyraxes can also climb into trees, although they're not quite as agile as their tree-dwelling relatives. A third kind of hyrax, the Bush Hyrax, is somewhat intermediate, living on hills or the slopes of river valleys, but often feeding in trees.


Of all the hyraxes, the rock hyrax is best adapted to dry country. (Their coats tend to be lighter in dry country than in moist areas.) A few hyrax populations even live on mountains in the Sahara desert! Here, sometimes not even grass is freely available. In such cases, hyraxes can conserve energy by lying and loafing in shady places for long periods. These also help them digest what little food they did manage to ingest. Their bodies are deceptively long … normally, as in my picture, they have a hunched-up posture, but when they stretch out in the sun, you can see how long they really are. These long little bodies contain their digestive systems, their long intestines helping them absorb as much water and nutrition from their food as possible. Bacteria in their guts help them break down cellulose. They also have very efficient kidneys. In the wet season in the moister savannah regions, they will urinate copiously, these staining their dens (and also carrying their scent so as to mark their territories). But in the dry season, the urine becomes very concentrated like thick syrup, their kidneys extracting and conserving as much water as possible. Hyraxes will feed when it is cool outside, mainly early in the morning or late in the afternoon. In deserts during the warmest part of the summer, they will feed in the dark of night, the only time when it is really cool enough. On cold nights they will huddle in their shelters, piling up on top of each other, two or sometimes even more layers deep.


Not only urine, but also dung, play a role in hyrax territoriality. Rock hyraxes live in groups of about twenty-five individuals. A single male will be the dominant hyrax, the others being his wives and their children. He will chase away his male children when they become adult and threaten his dominance, but the females will remain with their mothers. The entire group will share the territory. They will use a number of latrines, where they all defecate and urinate. They frequently urinate on rocks facing the sun or drying winds, leaving conspicuous light streaks on the rocks. They also have more sheltered latrines, where they urinate and defecate in flattish pockets sheltered by rock overhangs. Piles of hyrax dung have been recorded as up to 3 m/10' wide and 1m/3' tall. These areas concentrate their smells, and the individual colony members will deliberately tread in the dung and urine of the communal latrine so as to get the group's smell on their feet. This they then deposit over the rocks wherever they go, so scent-marking their entire territories. Hyraxes will also distribute the scent over their own bodies by grooming their fur with their teeth and with the curved inner claws on their hind feet. They also will dust-bathe, which keeps away flies and skin-and-fur parasites.


The smell of rock hyraxes is not all due to urine and dung, though. They also have scent glands on their backs, surrounded by tufts of erectable hairs. The male hyrax, during the breeding season, will puff out these hairs and exude his scent into the air. He will also scream at his chosen female and shake his head as he approaches her. Hyraxes have very long pregnancies for their size, the female carrying her babies for 214 to 240 days. Baby hyraxes are born at a quite advanced stage of development and are almost immediately active. She suckles them for a short while, soon starting to browse and graze on their own. Their mother doesn't pay them any particular attention; instead, the young hyraxes will play around all over the colony and climb on the backs of other hyraxes, which marks them with scent from the back glands. At a year and four months they are mature, and can live for 12 years in the wild.


The main enemies of rock hyraxes in South Africa (apart from humans who use their fur and eat their meat) are black eagles. When a group is out, one female hyrax will be posted as a sentry. Upon spotting an eagle, she will give an alarm bark, which will send the colony members scurrying for safety. Despite their long gestation periods, hyrax reproduction is efficient, not many babies dying, and hyrax numbers can increase rapidly under good environmental conditions. They are currently not endangered.