Colours of Wildlife: The Tree Hyrax – An Arboreal Hoofed Mammal 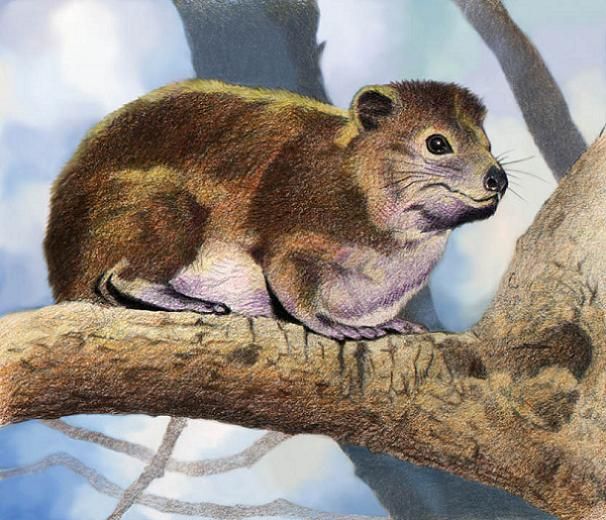 Here is a drawing of a Southern Tree Hyrax, Dendrohyrax arboreus. This animal occurs from South Africa to southern Kenya. In South Africa it is rare, only living in forests (of which there are few), but in Eastern Africa it sometimes occurs in more open woodland, moist savannah or thickets. It is also found high on some of the central and eastern African highlands.

Hyraxes remain some of the most puzzling mammals on Earth. Many of you will never have heard of them. Some of you who have, might have heard that their closest relatives are elephants. This is not quite true … they are also related to manatees and dugongs. But this relationship is quite distant, as you might imagine looking at them. But, like elephants and Sirenians, they are close relatives of ungulates – the huge group that includes hoofed mammals from pigs to camels to hippos to horses to goats and sheeps to cows and antelopes.

Today only four species of Hyrax remain (although they are sometimes split into a few more): Rock Hyrax, Procavia capensis; Bush Hyrax, Heterohyrax brucei¸ Western Tree Hyrax, Dendrohyrax dorsalis, and Southern Tree Hyrax, Dendrohyrax arboreus. They are all about rabbit-sized, weighing from 2 to 5 kg (about 5 to 11 pounds). Their bodies are round but fairly long, with their spines normally hunched but they sometimes stretch out when relaxing in a spot of sun. Their limbs are relatively short, and they have no visible tails. They are covered in dense, brownish fur, the exact shade varying between species. Those that live on cold, high mountains have longer, shaggier fur. Most species have tufts of fur on their backs that can be raised and fanned to disperse scents from glands that rung along their spines. Their heads are somewhat like those of guinea-pigs. They have long, sharp incisor teeth similar to the gnawing teeth of rodents, but these are used for defense and grooming rather than for feeding … they use their cheek teeth to bite off and chew bits of vegetation. They ingest lots of food in short binges and then spend long periods resting and digesting it all. All of them are good climbers, the Rock Hyrax living on rocky hills and mountain slopes, the Bush Hyrax as well – but climbing in trees from time to time also – and the two Tree Hyraxes mostly clambering about in tall trees. They seem somewhat poorly equipped for this – they have short limbs without opposable thumbs like monkeys or sharp claws like squirrels. Their toes are blunt with small hoof-like nails at the tips, but they are nimble and flexible and on the undersides have rubbery pads that are kept moist by sweat glands, giving them good traction on many surfaces. The legs, arms and spines of the tree hyraxes are very flexible.

What distinguishes the tree hyraxes from the others, apart from their being more arboreal, and leaf-eaters rather than grazers, is that they are primarily nocturnal. This accounts for them being very rarely seen. However, they are quite frequently heard – often terrifying people who have no idea what creature is making such bloodcurdling screams in the night! The call of the tree hyrax is extremely loud for its size, aided by a pouch below the throat acting as a soundbox. They use their calls to stake out their territories. In forests, they are mostly solitary, but on high mountains, they start to live more like the rock hyraxes, being more terrestrial, diurnal (day-living), and living in groups.

Hyraxes look cute and cuddly but can be extremely aggressive. People who have attempted to help sick or injured wild hyraxes have discovered this to their cost. Their teeth can inflict serious bites and they will struggle like mad to free themselves, while growling and screaming ferociously. They can be tamed, though, but I don't think they're really pet material … much better to let them live wild.

The living hyraxes are only a tiny remnant of a group that was very diverse in the past. They have always been confined to Africa and the middle East. Their origins are very ancient, the first being known from almost 40 million years ago. These were related to the ancestors of elephants, Sirenians and two groups of large mammals that are now completely extinct: Embrithopods and Desmostylians. For a long period hyraxes were a significant component of the large browsing and grazing mammal fauna of Africa. They ranged in size from that of a mouse to that of a horse! There were even some large species that became semi-aquatic like hippos. These might have been quite similar to the ancestors of the modern Sirenians. Hyraxes flourished around 25-30 million years ago, but then the ancestors of the modern ungulates started competing with them.

The benefits that the 'modern' hoofed mammals had, were mostly that they could eat more efficiently, cropping grass and leaves with their lips and front teeth – or in some cases toothless pads at the front of their mouths – rather than their cheek teeth. They could regulate their body temperatures better as well, and had longer and more efficiently constructed legs, giving them greater speed and stamina. Furthermore, hyraxes are slow breeders, with a gestation period of up to eight months, while for instance an antelope like an impala, which is much larger, has a gestation of a bit over six months. Thus on the open plains antelopes and other ungulates eventually replaced the hyraxes completely.

The hyraxes therefore retreated to habitats where either the other hoofed mammals could not follow, or where their advantages would count for nothing. In trees and on rocky hills the hyraxes use their superior climbing abilities. Their small size furthermore means that they can crawl into small cracks and crevices for safety, unlike even the best climbing ungulates such as goats or Klipspringers. For helping their poor temperature regulation, they employ tactics like huddling together or basking in the sun when they're cold, or retreating to the shade of crevices or the tree canopy when they're too hot.

So, while 'modern' ungulates, especially the antelopes, cattle, goats and sheep, outcompeted the hyraxes in most habitats, they managed to adapt successfully and survived to the present day. But they do constitute only a small remnant of their previous diversity. Even as 'recently' (geologically speaking) as two million years ago, there had been many more species, including larger ones, than exist at present.

The Southern Tree Hyrax is the one much more frequently seen and photographed, as it occurs in some of the large and popular game reserves in Tanzania and Kenya, as well as on mountains that are frequently climbed. The Western Tree Hyrax is restricted to the rainforest belt. Though both these species are widespread and numerous, and not endangered overall, there are numerous populations that are small, isolated and at risk. This is so of the rock and bush hyraxes as well. These different populations are all in need not only of protection, but also of study, to find out just how distinct and diverse they are. Some might be distinct at the subspecies level, while others might indeed legitimately be recognized as full species.