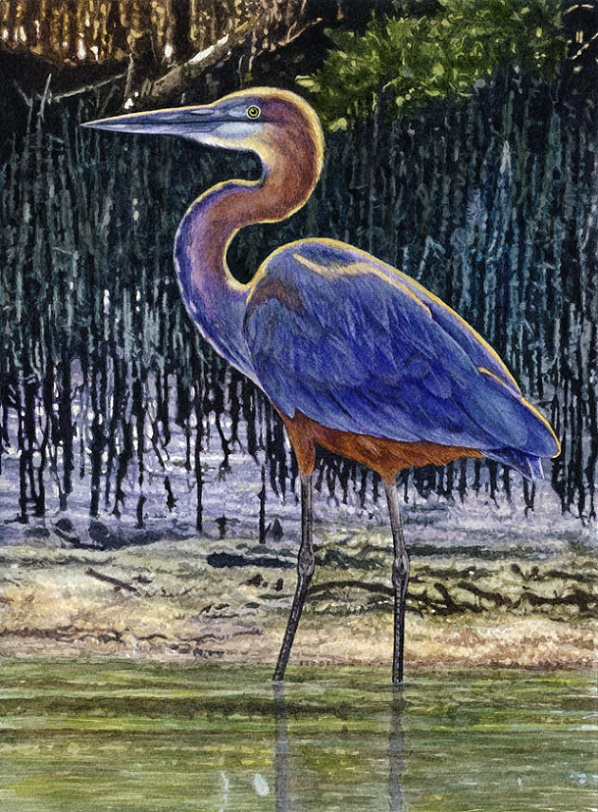 First of all I would like to thank Elsa for the photo I used as reference for this painting. The Goliath Heron, Ardea goliath, is, as you might gather from its name, a very large heron. It is indeed the largest heron found in South Africa and, to be sure, the world. It reaches a length, from bill to tail tip with its neck outstretched, of 140 cm/55", and a standing height of up to 150 cm/5'. This makes it about the size of a large stork. It is a tall, stately bird, and an impressive sight.


Goliath herons are not as common as the blue and black-headed herons which also occur here in South Africa. They're mostly seen around the big rivers and man-made ponds and lakes of the Lowveld. They prefer the warmer regions, and are missing from the southwestern parts of South Africa, as well as from highland and desert regions. It occurs in most of sub-Saharan Africa and also in the Middle East, India and Sri Lanka. They can be easily identified by their size and rusty brown head, neck and chest, with a bluish grey back and wings. This heron has a bushy crest at the back of its head, which it can raise in display.

For all their size, Goliath herons are actually quite shy! They won't allow themselves to be approached very close, flying off ponderously with a rushing of their huge wings if you try. In flight, their long legs droop downwards slightly, rather than being stretched out straight to the rear as in other herons. They are not noisy, but occasionally utter a raucous bark. They mostly occur singly or in pairs. They usually choose pristine, secluded stretches of the river for their fishing, or marshes, or estuaries or calm water inside of reefs along coasts. Human disturbance quickly drives them away. They seek shallow water with gently sloping, sandy banks. There they stand or walk, watching the water with their yellow eyes. They can remain in the same position, almost motionless, for hours. Upon seeing a fish within striking distance, they shoot their necks forward. Like the darters they spear fishes in their bills, usually opening their bills slightly and driving both mandibles through their prey. They will usually put it down on the shore and orient it so as to allow the heron to swallow it whole. Goliath herons hunt bigger fish than other herons, up to one kilogram in weight. Because of their size, they are also able to wade into quite deep water searching for prey. Unfortunately, goliath herons sometimes lose their catch to fish eagles who snatch it away from them. Sometimes even storks and pelicans manage to rob them of their meals. Goliath herons prefer fish but if they can will catch other small animals like mammals, reptiles, frogs or even insects. They'll sometimes feed on carrion.


Being large, goliath herons have large territories. A bonded male and female will share and defend a territory, which can sometimes include a stretch of river or shoreline a kilometre/0.6 miles long. In very productive waters they can have much smaller territories. Also, breeding sites can be close together. They usually make their nests on the ground, from dry branches and reeds, but sometimes nest in trees. Good sites for them are islands in the middle of rivers or lakes, which aren't easy to access by land predators. Goliath herons can breed any time of the year, warm climates making winter breeding possible. They lay two to five eggs, and both parents incubate the eggs and feed the chicks. Unfortunately, only around one in four eggs tend to hatch, so that it's rare that more than one chick is reared per season. The chicks are aggressive and can defend themselves against outside threats; when frightened they can regurgitate their most recent meals to make themselves lighter so they can get away fast. The chicks are preyed on mainly by large eagles. A chick, provided it survives, fledges at the age of 40-50 days. It then wanders off, seeking its own territory, sometimes covering large distances.

Herons have a kind of feather, shared with a few other wading birds, called powder down. These are simple feathers resembling down, but with the property that they easily crumble into dry powder! The powder down feathers occur in special patches. When the heron preens itself, it will run through these powder feathers with its bill, causing them to crumble. The resultant powder is now spread through the other feathers, and as the heron works through them with its bill, the powder helps clean the other feathers of fish slime and other gunk the heron might have picked up in the water.