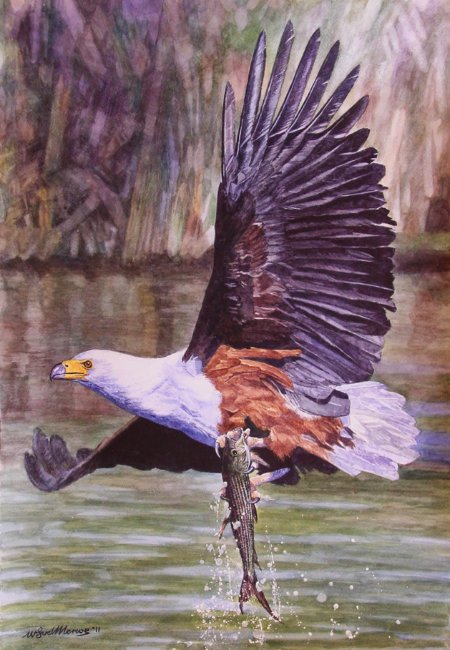 The Fish Eagle - Icon of Africa

Here is an almost too stereotypical scene of Africa – a Fish Eagle, Haliaeetus vocifer, catching a Tigerfish, Hydrocynus vittatus. It's not something I would usually paint, but someone asked me to so I did!

African Fish Eagles belong to a genus of large eagles that often catch fish over fresh or salt water, most being called Sea Eagles. This is an ancient group; Sea-Eagle-like fossils have been found from 33 million years ago, and fossils certainly belonging to the present genus Haliaeetus have been found that are twelve to sixteen million years old. Eight species still live in our modern day, among which are the equally iconic Bald Eagle of America, and Steller's Sea Eagle, the heaviest eagle species on Earth. These eagles appear to be more closely related to kites (small to medium-sized hawks) and buzzards ('buzzard' in the strict sense, as in medium-sized eagle-like birds, not the new world vultures, often called 'buzzards' in America) than to the 'classical' large eagles of the genus Aquila. This genus includes the Golden Eagle, the Australian Wedge-tailed Eagle, and the Black Eagle of Africa. Of the other members of Haliaeetus, some are rare and endangered – the Madagascar Fish Eagle being the most seriously threatened.

Fortunately, the African Fish Eagle is currently not in danger. It occurs everywhere in sub-Saharan Africa where there are rivers, lakes or ponds, and has even benefited from lakes and dams made by humans. Unlike some of the other fish and sea eagles, it prefers hunting in fresh water. Tiger fish and other large fish like catfish and tilapia are popular as prey, but this large eagle will also on occasion grab water birds like ducks or flamingos. It will even catch baby crocodiles, or water monitor lizards. Many photos and videos have been made of it catching a fish like in this painting – many times a kind of 'ploy' being involved, a dead fish made to float on top of the water while the camera/video person watches from a hide until the eagle goes for the lure.

In the wild, they don't spend all their time fishing. All a single eagle needs is one fish of about 150 grams (5 oz) per day. These eagles are capable of catching fish weighing up to 3.5 kg (about 8 lbs), which would give them enough food to last a while. A Fish Eagle cannot actually fly off with such a large catch – it will drag it over the water surface to the bank - sometimes even paddling in the water using its wings! But they can carry fish weighing up to 1.8 kg (4 lbs) in flight. Fish Eagles typically hunt from perches – they favour large dead trees at the waterside, from where they watch intently for suitable prey to come within reach. They don't always succeed...on average, a Fish Eagle actually catches its fish only once in every 15 tries. It's been determined in a study in East Africa that a Fish Eagle only spends about eight minutes each day actually fishing. The rest of the time it's just sitting on its perch, sometimes preening its feathers. Sometimes they can be seen soaring high in the sky – breeding pairs often flying together.

One of the most iconic aspects of the Fish Eagle is its call. Rather than trying to describe it, I refer you to this link – this sound in any movie is enough to establish the scene as taking place in Africa.

Fish Eagles utter this call either perched or on the wing, and throw the head right back as they do so for that 'yodelling' effect.

Although the Fish Eagle is small compared to some other members of its genus, it's still quite a large eagle: males can reach 2.5 kg (5.5 lbs) in weight, females 3.6 kg (8 lbs). Females can achieve a wingspan of 2.4 m (8 ft). This situation of females being bigger than males is not at all uncommon in birds of prey.

This is the national bird of both Zimbabwe and Zambia.