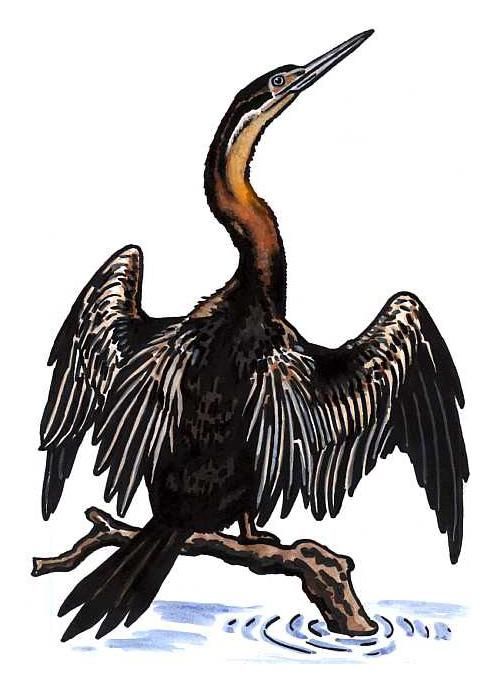 This is an old and somewhat cartoonish painting of an African Darter, Anhinga rufa, that I intended for a children's book. But although it is simple, it illustrates this amazing bird well enough, in a quite typical pose. Darters are diving birds, but you don’t see them diving much. Instead, most of the time you see them like this, sitting on a branch emerging from the water, with their wings spread out.

This wings-in-the-sun pose is for drying their wings after each dive. Like cormorants (which I hope to feature soon as well), darters have feathers that absorb water rather than repel it, as is the case with ducks and most other birds. These absorbent feathers enable them to reduce their buoyancy … if their feathers repelled water they would tend to float on the surface like corks, but with the feathers wetting down, they can more easily dive deep below the surface. But wet feathers aren't good for flying, and these birds do need to fly from time to time, so it's best to dry them out in between dives. But they probably use this for warming up as well, after having been in the cold water, or on cold mornings.

But sometimes you will see them diving. They're not easy to see in the water. They swim with their whole bodies under the surface, and only their heads and necks protruding. If you see them from a distance you may actually think you're looking at the head of a snake swimming in the water! For that reason they're sometimes called snakebirds. But the long, sharp bill is a giveaway, if you're close enough to see it. Closer still, and you might be able to make out the dark body just beneath the water surface. Darters propel themselves with their webbed feet whether swimming or diving. All four of its toes are connected by webbing. This, along with the legs set far to the rear of their bodies, make darters rather awkward out of the water. They rarely walk, but if they do, they use a high-stepping gait with wings spread out for balance.


The darter's most distinctive feature is its long and snake-like neck. Around the middle of the neck there is an S-shaped bend. Special muscles and tendons around a hinge-like joint at this bend allow the darter to rapidly thrust its neck forward. This is how it hunts fish! It will swim under the surface and when spotting a suitable fish, it opens its mouth slightly. When within striking range it will snap its neck forward and impale the fish with its sharp bill! Then it will emerge and throw the fish off the bill into the air, catching it as it comes down and swallowing it head first.

A darter's bill is also an excellent weapon. They will aggressively stab at predators, and will also defend their nest sites against other birds with stabs from the bill. Darters nest in colonies, often with other birds of the waterside like cormorants or herons. The nest is a pile of twigs and sticks and is made in trees or reeds. Darters are monogamous for the duration of the breeding season. The male is darker in colour than the female, with bright rufous at the side of his neck, while the female is lighter and duller in colour, but a bit larger than the male. The male courts her by raising his wings, waving them up and down, bowing his neck, snapping his bill, and giving her twigs as presents. Once paired up they maintain the bond by displaying together: they rub their bills together, and do cool neck moves in unison, waving their necks, straightening them, and curling them.


Each season the female lays two to six eggs, over one or two days. She immediately starts incubating, enfolding the eggs in her webbed feet. The first eggs laid also hatch first, so that the chicks are not all the same age. In lean years the youngest chicks may die, but at least some have a chance of surviving. Both parents care for the chicks, regurgitating fish into their mouths. The chicks take a while after fledging to learn how to hunt effectively. It takes them about two years to mature. An adult darter can reach 80 cm/32" in length, and 1.4 kg/3 lbs in weight. Darters can live for possibly sixteen years, but in the wild most make it only to about nine.


I know darters very well. I often see them at the Polokwane Bird Sanctuary … but I must admit it's been a while. But they occur at almost every lake, pond, quiet stretch of river or other permanent or semi-permanent water feature in this country. This species is found all over sub-Saharan Africa and also in Madagascar. As such it is not at all rare or threatened. Three other darter species are known: the Oriental darter, Anhinga melanogaster, the Australasian Darter, Anhinga novaehollandiae (sometimes considered a subspecies of the Oriental Darter) and the American Darter or Anhinga, Anhinga anhinga. The group is therefore pantropical – occurring in the tropics all around the world. They extend marginally into warm temperate regions. Darters are close relatives of cormorants, gannets and boobies, and frigate birds.