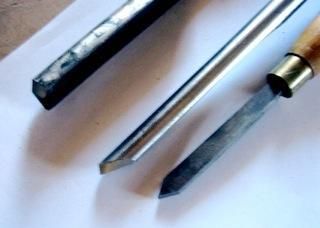 The Green Man ? I've let Him down and He's let me know it in no uncertain terms, so we'll have to try to fill in with something or other, until He calms down a bit and tells me what to do in order to recover. It may be some time...

Probably the first thing to say about sharpness is that there seems to be no widely recognised scale of sharpness by which to judge all your edge tools.

Certainly, there is at least one scale – for, say razor blades, scalpels and suchlike – by obeying the standards (when you find them), hang a loop of suitably consistent thread from a suitable spring scales, rest the edge of the test tool in the bottom of the loop, press down until the thread parts and take a reading. OK, that'll tell you something about the range of tools you're testing: scalpel versus scalpel, maybe scalpel vs razor blade, but nothing much about tools in general. That method won't help much with judging, say, axes against drill bits.

Common experience tells us that a razor blade or scalpel is sharper than a drill bit but that isn't, really, a fair comparison. A drill bit must be pretty sharp (and hard of course) in order to put a dent in that piece of steel so that it has something to work on.

Obsidian is a volcanic glass that fractures with extremely sharp edges, typically one molecule thick. It was (and very probably still is) used for cutting and piercing and has also been used experimentally as surgical scalpel blades (so a bevel is not relevant). Steel, on the other hand, has to be ground down to a fine edge and, because of its crystalline structure, an edge just one molecule thick would rapidly wear down to a (microscopically) jagged edge as some partial crystals break away (though still sharp enough to cut skin easily!)

So, what you can say about sharpness is that if a tool has a consistent one molecule thickness along its edge, then that edge is perfect and that tool can get no sharper. But how long that perfection will last in use is a different matter.

The bevel is the part of an edge where the thickness of the base material is ground down to nothing.

The angle of a bevel on a tool has a lot to say about its durability: a razor blade with a bevel angle of 15 to 18 degrees each side is ideal for erm, well, shaving hair. It will cut skin and underlying flesh easily enough but is not so robust as to get far into a finger bone. For that, a chef's knives, thicker and with less acute bevels would do rather better perhaps, whereas a woodsman's axe would cope well with an arm or a leg.

For a drill bit, the bevel (each side) is usually a hard wearing 60 degrees or thereabouts.
For razor blades the bevel can be from half to one millimetre wide: a fine edge, considering the thickness of the blade itself is usually rather less than a millimetre. Those two examples have bevels ground on each side of the blade, razors at an angle of about 15 to 18 degrees, drill bits very much less acute, at around 60 degrees.