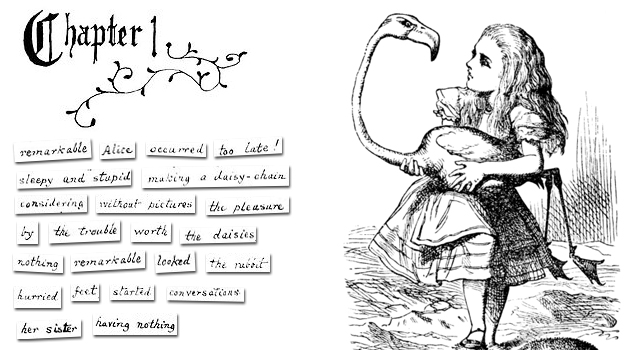 The July Create challenge was all about poetry, specifically poetry created using only the words on page 42 (what else?) of Alice in Wonderland. We are proud to present the results of that challenge.

First up is the Creator of the challenge himself:

Pastey
carrying her courage upon her arm,
glaring after the children.
Who would lie stopped and bowed?
politely followed, nervous smiling,
all manner of grand Majesty.
is this it?
only your backs, the same as the rest,
surprised at crimson Nonsense.
decidedly silent, only a child
angrily, impatiently where she stood.
smiled with fury and screamed
like a beast of such doubtful moment

Many more were to follow and in no particular order whatsoever:

Mu Beta
The King came upon Alice as she did lie
Down flat on her face by the rose-tree.
The knave stopped timidly in reply;
Looked at her tossing the velvet with fury
Jumping impatiently as she was recognised,
Alice turned her hand to the King’s crimson head.
But the royal crown was nervous, doubtful, surprised
So Alice waited and politely said:
“Your Majesty, my hands ought to turn it from rest
Soldiers came off loudly and decidedly you see."
Alice laid gardeners, courtiers and guests
Came when smiling at the faces, all three!
His manner opposite and merrily smiled
Down at the lying crown, pointing:
“Could not beast upon your crimson cushion, child
My dear, I be a Queen, not a King!"

minorvogonpoet
Silent couples walked hand in hand,
noticing the pattern of diamonds
around the rose tree in the garden.
The Queen and procession of courtiers
bowed, talking of courage.
Remember soldiers carrying children
on their backs, as the crimson beast
screamed with fury.

SashaQ
The White Queen walked in Majesty
and a silent Knave followed timidly
carrying velvet Hearts in procession.
She stopped by a rose-tree
and the Knave looked at her feet
with courage, and waited.
Noticing, she smiled at him
and bowed her head;
politely she said, "please my dear".
Nervous, smiling, they stood
hand in hand at last.

Beatrice
Crimson, crimson silent hearts
White a smiling crown
Arm and head, the beast it's said
On child of ten looked down
Hands still flat, and faces turned
It backs away from you
But pointing feet decidedly
Could not tell how or who

Dmitri
people lie down on their faces
smiling at everything said,
soldiers, crimson with fury,
a wild beast: 'Off with her head!'
the royal children, these little dears,
jumping merrily hand in hand,
such the rule at processions,
hurried, nervous, grand.
who are these round the rose-tree?
people, oblong and flat.
the guests? they're only a pack of cards.
needn't be afraid of that.
it's the same pattern of nonsense,
Idiots, timid. you see,
screamed, not very politely,
that two and two are three.

paulh
Every wild beast looked at her,
Smiling when it recognised her.
Nervous soldiers stopped, glaring
At the pack where they were.
She smiled, and merrily thought
How like a royal knave
She was, but could not
See the grand procession.
"What is your name?" The Queen said
.

The child only bowed her head.

Asteroid Lil
Knave clubs a rose-tree
As a gardener corners
A crimson rabbit.

Gnomon
So she came in crimson majesty,
Ornamented with diamonds,
Smiling at everything that was said.
The knave stood and recognised her.
Remember: hand in hand they lie,
His hand upon her arm, her head.
She stopped and looked
The guests noticing her nervous,
Talking in hurried manner.
"Who is this you see" they said.
She thought "I needn't be afraid
what would be the use of fury
I was only a child".
Timidly she smiled and turned her head.

Well done to all those who took part, fabulous work, and don’t forget to add your July Create Badge to your PS’s. Maybe we should try this again?

The challenge may be over, but that doesn't mean you can't still have a go. Here is the page we used and you can post any further contributions at the bottom

First came ten soldiers carrying clubs; these were all shaped like the three gardeners, oblong and flat, with their hands and feet at the corners: next the ten courtiers; these were ornamented all over with diamonds, and walked two and two, as the soldiers did. After these came the royal children; there were ten of them, and the little dears came jumping merrily along hand in hand, in couples; they were all ornamented with hearts. Next came the guests, mostly Kings and Queens, and among them Alice recognised the White Rabbit: it was talking in a hurried, nervous manner, smiling at everything that was said, and went by without noticing her. Then followed the Knave of Hearts, carrying the King's crown on a crimson velvet cushion; and last of all this grand procession, came THE KING AND QUEEN OF HEARTS.

Alice was rather doubtful whether she ought not to lie down on her face like the three gardeners, but she could not remember ever having heard of such a rule at processions; "and besides, what would be the use of a procession," thought she, "if people had to lie down upon their faces, so that they couldn't see it?" So she stood still where she was, and waited.

When the procession came opposite to Alice, they all stopped and looked at her, and the Queen said severely, "Who is this?" She said it to the Knave of Hearts, who only bowed and smiled in reply. "Idiot!" said the Queen, tossing her head impatiently; and turning to Alice, she went on, "What's your name, child?"

"My name is Alice, so please your Majesty," said Alice very politely; but she added, to herself, "Why, they're only a pack of cards, after all. I needn't be afraid of them!"

"And who are these?" said the Queen, pointing to the three gardeners who were lying round the rose-tree; for, you see, as they were lying on their faces, and the pattern on their backs was the same as the rest of the pack, she could not tell whether they were gardeners, or soldiers, or courtiers, or three of her own children.

"How should I know?" said Alice, surprised at her own courage. "It's no business of mine."

The Queen turned crimson with fury, and, after glaring at her for a moment like a wild beast, screamed "Off with her head! Off...."

"Nonsense!" said Alice, very loudly and decidedly, and the Queen was silent.

The King laid his hand upon her arm, and timidly said "Consider my dear: she is only a child!"

The Queen turned angrily away from him, and said to the Knave "Turn them over!"