We’re fools whether we dance or not, so we may as well dance – Japanese proverb

Who could fail to have been inspired by the colourful spectacle of Danny Boyle’s opening ceremony for the London 2012 Olympics? When the announcement that the 3rd largest sporting event in the World was coming to Belfast, and would have its own fabulous opening ceremony, I was intrigued. More than that, I wanted to be involved. And so I volunteered as a dance performer for the opening of the World Police and Fire Games 2013.

There were very few people at the first meeting/ rehearsal which was held at T13, across the road from the iconic Titanic Belfast building. I hadn’t been to this venue before, but it is a great space full of BMX, roller bladders, scooters etc. And break dancers. I’d been a bit worried that the performance might be a gaggle of skinny 15 year olds twirling ribbons, but the dozen or so who were there were a variety of ages, shapes and sizes. Artistic Director Mags Byrne set out the theme for the parade and showed pictures of some of the costumes, played some of the music etc. She described one of the costumes as being like a big blue bird with wings, and suggested that it might have the most choreographical element - the other costumes and flag bearers weren’t doing much more than smiling and walking in formation. The smiling part was important, though, that was emphasised!

It’ll be outdoors, in daylight, so everything has to be really big, OTT, exaggerated. Subtlety won’t work.

Back home, I asked my dance-student daughter if she’d come across Mags before, and sure enough, she had, as part of her performance with the Cultural Olympiad last year.

2nd meeting : Be the Sea

There were lots more people around for this one! The various groups were shown their props and the moves they’d have to do – roly-poly arms for the propeller blades, dramatic avian moves for the black sinister birds, twirling white umbrellas for snow, and up-and-down black umbrellas for rain. There was not a lot to do for the big blue wings (now referred to as waves) but Mags did point out that your arms would get sore holding out those wings for a full 15 minutes. While smiling. But in my head I’d already volunteered to be in that group. Everyone picked their own section based on what appealed most – the propeller group was favoured by the blokes in the room. 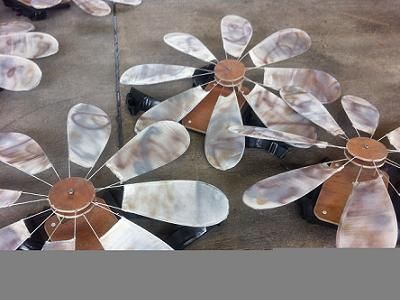 I joined my fellow wing/ wave dancers and we went outside to practise some moves, in the shadow of the famous Belfast Harland and Wolff cranes. After a few minutes my arms were aching and I wondered if it was too late to change my mind about my chosen group. But the costumes were lovely – glittery sequin-strewn capes with poles to extend the arms, and fluttering in the breeze to represent the sea. Ah the sea! I grew up beside it and it has always been an important part of my life, so I reckoned I could “be the sea”. 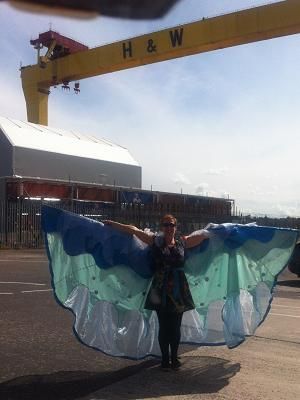 Yes Mags remembered my daughter fondly, when I asked her, and was very complimentary about her as a dancer.

Our homework was to practise smiling for 15 minutes. There would be at least six TV cameras filming the event, to be shown in 70 countries around the world, so no doing anything that might be embarrassing, and keep expressions big and energetic. Oh dear, I bet my blue cape blows over my head and that’s the clip that’ll go viral.... 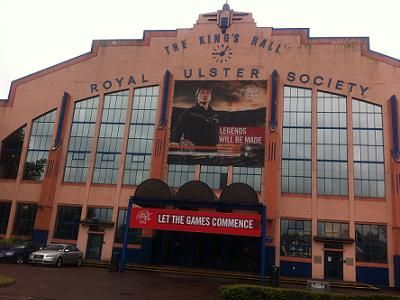 I was really excited in the run up to performance day , full of adrenalin and positive nervous energy. I’d opted for public transport to the Kings Hall, and it was free for competitions and performers. Which was nice. I found my way to the allotted meeting point in Alexander Hall – the last time I’d been there it had been full of goats waiting to be judged at the Royal Ulster Agricultural Show! At 10 am, the hall really started to fill up: there was a group of young children who were to be a school of fish, the costume lady was dishing out the various jackets and headgears to be worn, and other performers were arriving and finding themselves a corner to claim. It transpired that there were different categories of participant – those with red passes were “volunteers”, and entitled to a £4 lunch voucher to be used at the various vendors on the site. They could choose from paella, pulled pork sandwich, or a gourmet hot dog. My meagre lilac pass marked me as a “performer” and consequently only entitled me to the sandwiches which were brought in in large boxes. I avoid bread, but I’d anticipated this problem and was well stocked with my own refreshments, including a rather tasty butternut squash and red onion tartlet that I’d made the night before.

Outside, the rain had started. The forecast had not been promising, and there’d even been talk of tornados! I dreaded to think what my blue cape would do if caught by a strong wind. At 11 we donned some of our costumes and lined up outside in order, ready for the only practice run we’d have. The theme was “exploration”, and the opening music was the cue for some fur clad and ice-encrusted adventurers to appear from the small stage in the centre of the arena, and start looking round in an exploratory fashion. As the music rose in pace and tempo, they joined the head of the parade with a succession of floats. First came a small fishing boat. This was followed by a shipwreck, and, bizarrely, a piano. Then came a huge whale, complete with noisy spout, and in its wake chattered the school of fish. That was followed by a man with a spyglass in a bath tub, perched high on a scaffold. Then came my group of waves. The parade director decided that some of us waves should go in front of the bathtub, so that it looked more like it was surrounded. I was one of the four to go in this first group, which meant being circled and teased and deafened by the school kids who couldn’t resist playing hide-and-seek under our cloaks.

We started our parade, smiling for all we were worth, twirling our capes as best we could in the drizzle and wind. Then, the music stopped. The whale was having difficulties in negotiating one of the corners, so we all had to go back and start again. The end product may all look very glamorous and be over in 10 minutes, but there are hours of hanging around in the rain for shows like this. 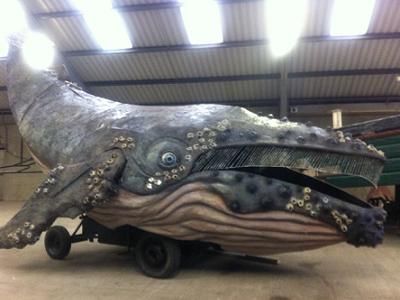 Take 2, and we are more on top of what we had to do. As the parade proceeds, local singing star Peter Corry takes to the stage and sings about a little stream winding its way down to the sea. At this point the school of fish go off and do a swimming dance up the centre aisle, before joining the main parade again. The music returns to an up-tempo beat, and various BMX bikes appear and do some stunts around the centre stage. Peter comes back on stage to sing “Go the Distance”, which is our cue to leave by the nearest exit. Without cheering or whooping as we depart, so that audience is still focussed on the stage.

Back in Alexander Hall, fine adjustments are made to costumes. Under our blue cloaks we wear rather fabulous green gowns, and mine needs to be shortened using a staple gun, so that I don’t risk tripping over it. It’s now lunchtime, and we have a few hours free to explore the site and stretch out legs. The rain has stopped and the sun is making an attempt to shine. While purchasing a coffee, I notice local DJ Alan Simpson sitting at a table, getting ready for his show to be broadcast from the venue later on. I introduce myself and thank him for his part in getting Jedward to sing Happy Birthday to my stepson last year. During his show, he chats with Olympic golden girl Dame Mary Peters, a wonderful ambassador for sport and for Northern Ireland, and the pair of them dance to a samba band who were wearing stilts – quite an achievement! 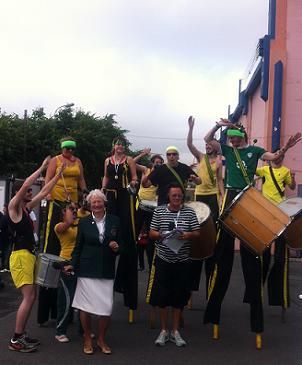 The doors open to the public at 3, and soon there are long queues for the loos, the burger vans, the bar....

The atmosphere is one of palpable excitement, and many of the competitors are sporting interesting outfits – the Norwegians show off their horned Viking helmets, the Dutch team are very visible in bright orange, and the Canadian Mounties are being photographed by all and sundry. By 6, most spectators are in their seats, ready for the athletes’ parade at 6.30. We don our costumes and have our faces painted in a suitably oceanic theme. We commence lining up at 7.15, and the sun finally makes an appearance! The opening speeches duly delivered, the opening strains of our music start up, and we were off! Smiling, twirling, avoiding TV cameras, being dazzled by the flashes of the cameras of the thousands of athletes and spectators now filling the arena, smiling some more. The energy and atmosphere is just electric – the athletes are smiling, the First Minister is smiling, Dame Mary Peters is smiling, and we all smile and smile for all we are worth. It’s all I can do to stop tears of joy spilling down my painted cheeks as Peter Corry launches into the stirring opening lines of his final song, and my heart sings with him as he belts out :

I know every mile

Will be worth my while

When I go the distance

I'll be right where I belong

Tempting though it was to stay and watch the rest of the show, I really hate the rush of crowds at the end of events, so I made my way to the train station for the journey home, still in my blue face paint! This greatly amused some Sri Lankan cricketers who asked me to take their picture, especially when I discovered that I was on the wrong train! But I did make it safely home in time to watch the highlights on the evening news. 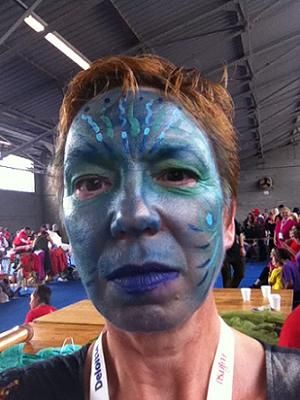 It was a truly unforgettable experience. I am in awe of all those enthusiastic and highly trained athletes who will be here for the next 10 days pitting their skills in such events such as climbing-the-stairs-while-in-full-firefighter-kit. I am inspired by creative talents such as Mags and Anne Marie the costume guru who can work miracles with a staple-gun. And I love being part of a team of volunteers who are funny, warm, generous of spirit, and – as they say in these parts – great craic1.

Murder on the Dance Floor Archive

1I usually abhor that fake Gaelic spelling, but I wouldn’t want any misinterpretations of me enjoying good crack.