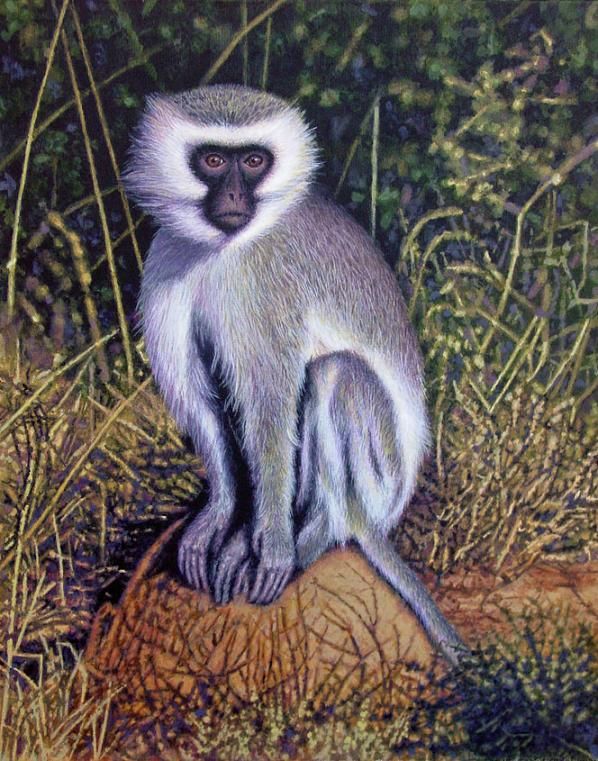 This is the common small monkey of South Africa, the Vervet Monkey. The other one found here is the Samango Monkey, Cercopithecus mitis. The two are sometimes confused with each other, but occur in different habitats, the Samango living in dense, tall forest, the Vervet being found, most of the time, in trees growing along streams in dry savannah or grassland country. Since South Africa has so few forests, the vast majority of monkeys seen here are vervets. They cannot really be confused with baboons, being much smaller (reaching a weight of about 8 kg/18 lbs while baboons can exceed 20 kg/45 lbs) and having short, black faces conspicuously rimmed in white fur.

There used to be only a single species recognized, and called, generally, the Vervet Monkey, placed in the species Cercopithecus aethiops which means 'ethiopian-faced tail-monkey'. Recently, however, this species has been split, first of all into six different species: the Vervet, Mount Bale Vervet, Grivet, Tantalus, Green and Malbrouck monkeys. Then, as well, these six have all together been given their own genus, Chlorocebus (meaning 'green monkey'), which has been separated from the main body of small African monkeys called Guenons, the genus Cercopithecus (to which the Samango still belongs). The Chlorocebus members are all collectively called Savannah Monkeys, to distinguish them from the other small long-tailed monkeys, all of which live in forests. The savannah monkeys are all similar to each other, their bodies being grizzled greyish, brownish, yellowish or occasionally greenish, and their faces dark and bordered with white fur. But they do display remarkable variation, and the faces of the different species have markedly different expressions. The Vervet monkey proper is the most widely distributed species, ranging from South Africa through East Africa as far as Ethiopia. Westwards and in Central Africa the other species replace it, each having its own range. Where the ranges of the species meat, there are 'belts' within which they hybridize with each other.


Are these monkeys Blue?

In Afrikaans this species is called a 'Blouaap' or 'Blue Monkey'. Now looking at them from a distance, they look grey, not blue, but up close, you can see that the skin of the belly that shines through the lower abdominal hair is blueish. Additionally, in the male the, erm, bits that hang down are bright blue and the pointy bit is red. These vivid colours advertise who's the biggest 'hunk' of the troop.

All the savannah monkeys, vervets included, are social. Vervets live in troops numbering five to fifty members. There are male as well as female dominance hierarchies. The largest, most aggressive and most sociable males – the ones able to accumulate lots of allies while also being able to keep these allies in line – dominate the troop. The females establish their own hierarchies by alliances with the dominant male and with each other. Grooming plays a big role in cementing bonds and enhancing status. The males defend the troops, being on the lookout for danger and fighting when necessary. Vervets have alarm calls distinguishing four categories of predator: snakes, eagles, leopards and baboons. Each alarm call will elicit a different response from the troop: a 'leopard' warning for instance sending them scrambling to the topmost branches of trees, but an 'eagle' warning causing them to look up and seek something that will protect them from above. Young monkeys often give inappropriate calls, for instance the 'eagle' call in response to falling leaves or small, harmless birds like starlings! The monkeys seem to know which individuals are reliable, ignoring the alarm calls of unreliable ones. They have many other kinds of call as well, thirty-six different ones having been noted so far. Vervets are able to distinguish the calls of different individuals – mothers can recognize the cries of their own babies.


Child-rearing is a social affair with the vervets. A female will often leave her baby (only rarely will she have twins) in the care of younger females, or with her own mother. Young vervet monkeys prefer the company of their grandmothers to that of their aunts or more distantly-related females. Babies get favourable attention from all the others, and the entire troop will act together to protect them against threats. When they grow up, female monkeys remain with the troop, but male monkeys leave and seek to establish themselves in different troops. They will often leave with a brother or other male relative, to give them a better chance: being accepted by a different troop will often involve some fighting, and having at least one ally improves your chances. By this exchange of males between troops, the vervet monkeys insure a healthy exchange of genes and reduced chances of diseases or debilities caused by in-breeding. They have more babies more frequently in good years with high rainfall than in dry years. Females reach sexual maturity at three to four years, males at five, and these monkeys can live for more than thirty years.

In the dry savannah food can be scarce. To improve their chances these monkeys are omnivorous and can eat many different things, feeding in trees and also on the ground. They have big cheeks which they can quickly stuff full of food, that they can then later chew and swallow at leisure. They prefer fruit, and many different kinds are found from small berries to quite large fruit such as those of Baobab Trees. Many of these fruit are pleasant-tasting to humans, but monkeys will also eat fruit that to us may not seem so appetizing, including dry pods. Like Bushbabies they will also munch on the sticky gum exuding from the bark of thorn trees. They will eat flowers, leaves and buds, roots and seeds. They will catch insects and other small critters, but are not very adept at this, since they have short thumbs and their hands therefore don't have precision grasp. Some monkeys catch crustaceans like freshwater or mangrove crabs, being good swimmers. They will also take birds' eggs. In some places they have learnt to steal alcoholic drinks from people!


These monkeys are bold, inquisitive and mischievous and this can be a problem in their relations with humans. Generally it is a bad idea to feed them. Although they are cute looking, they have very long and sharp teeth and can inflict serious injuries on people, especially children. Monkeys that have become too bold and considered 'problem animals' may be shot!


Generally, though, these monkeys are still very numerous and not threatened.