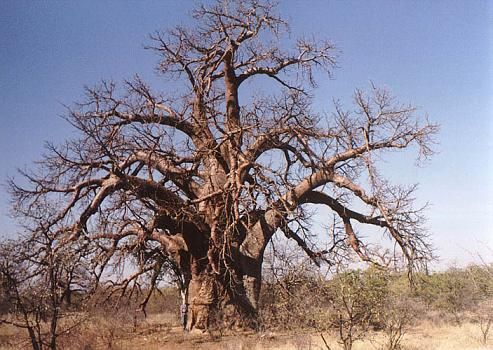 For this article I’d like to tell you about another iconic plant of my own region, the Baobab Tree, Adansonia digitata. There is already an entry on them on h2g2 here. I also mention baobabs in this entry. Then there's my short story, Time for a Change. So, I've written about them a lot on h2g2 already, but not yet for the Phyto-Philes, so I'm using this entry for extra pictures and information, plus personal impressions.


I live in the province of Limpopo, which is the northernmost province of South Africa. This province is named for the Limpopo River, which flows in a huge curve along the northern border of our country. The valley that has been carved out by this river is a low-lying, very hot and dry region … and it is exactly in this region where you will find baobabs! Their distribution in this country almost completely corresponds to the Limpopo Valley, except in the Lowveld to the East where they penetrate further south to about the Olifants River. The Baobab tree also appears on the Limpopo Coat of Arms, and on Limpopo license plates. Many magnificent specimens can be seen around the town of Messina, and along the road from there to Pontdrift. There is also a nature reserve around the town, the Messina Baobab Reserve, with numerous beautiful large specimens (not to mention other very interesting and distinctive plants and wildlife). I've been there on many occasions along with my mother and father. The photos here were taken in the reserve. The paintings are also of trees either from there or elsewhere close by. So this is a tree that I know very well up close and personal.


The first photo is of one of the largest ones I've personally seen so far. You might not be able to see him, but my dad is actually standing next to it. The second photo is an enlargement in which I point him out. This tree is about 20 m (70 ft) tall, with a trunk thickness of about 5 m (17 ft). The largest known specimens have been recorded with trunks of over 15 m (50 ft) in thickness! But they don’t get much taller than this, 25 m (83 ft) being more or less the limit. In other countries they do get taller. Baobabs occur northward from here into most of the hot, dry savannah regions of Africa. Although elsewhere they get taller, the thickest ones as far as I know occur over here. When one day I have more confidence and improved circumstances, I will try and seek the largest ones out and to see them and photograph them in person. 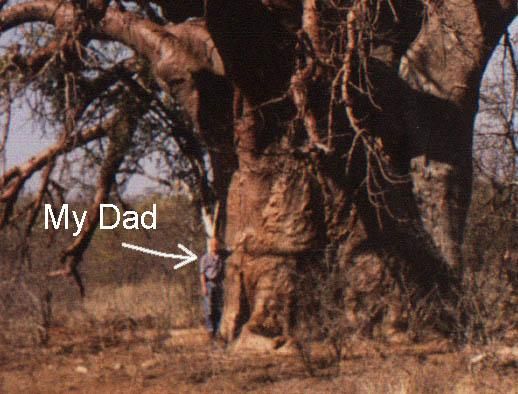 A particularly interesting specimen not at all far from where I live is a big baobab with a bar inside its trunk. This is actually not harmful to it, and the tree (as far as I know) is still thriving. Some wild trees naturally become hollow. The hollows in the wild can give shelter to many different kinds of animals. Hollows that face upwards collect small pools of rainwater, that may last well into the long, dry winters, and which will be utilized by monkeys, baboons and squirrels for drinking. Even non-hollow trees have many nooks and crannies formed by the folds of the trunk, branches and bark that can be used as homes and hiding places by myriads of creatures. Here I include a photo of the bark of a baobab, to give you an idea.


From a distance these trees can appear grey or whitish, but up close, the bark of healthy trees can be seen to be a pinkish or bronze colour. The bark also forms vertical ridges giving the impression of melting and dripping candle wax! These trees being so ancient, one can almost imagine the bark actually sagging and flowing downwards over many centuries to create this effect. As it is, these folds make many small crevices, and directly under the limbs (which do very much give the impression of huge giant arms) there can be much larger sheltered hollows. These are handy nesting places for swifts. In our region, Böhm's Spinetail Swifts are in particular associated with baobabs, preferentially making their nests in such hollows. Other birds that also prefer baobabs for nesting include White-crowned Shrikes, Red-headed Weavers, and Buffalo Weavers. One of my paintings shows the large, untidy bundle-of-grass nests of Buffalo Weavers in a large baobab. There's also a small falcon, Dickinson's Kestrel, that's particularly associated with regions where baobabs grow. Finally, Ground Hornbills also often make their nests in large hollows at the tops of baobab trees. I mention all of these, and more, in my short story! 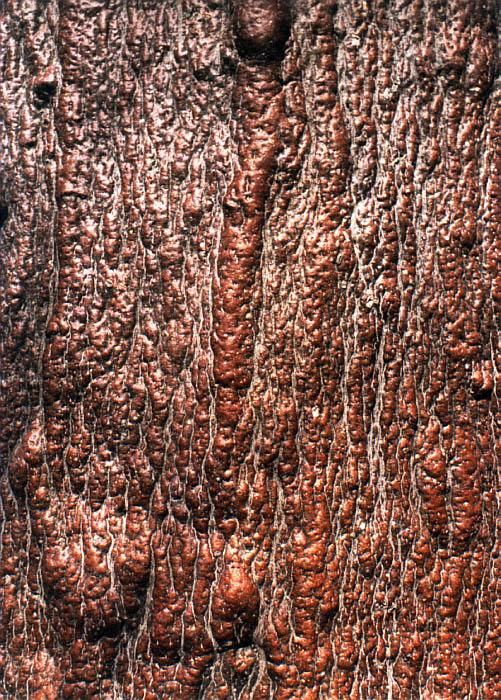