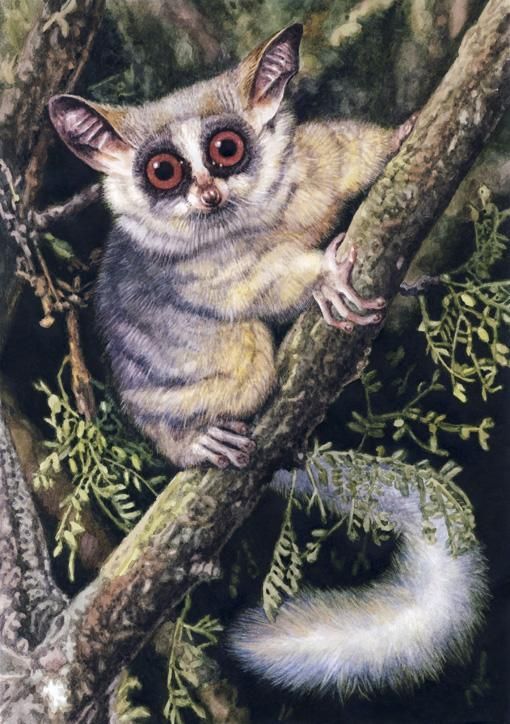 This is my candidate for the cutest mammal species on Earth: the South African Bushbaby, Galago moholi. My painting doesn’t even do it justice … in fact photos rarely do so either. You have to see them for real! They are so tiny and fluffy with such huge eyes and ears and pretty pointed little snouts , and tiny little fingers on their tiny little hands …


Let me start at the beginning. Most of you probably don’t know what a bushbaby is. Bushabies, also called Galagos, are primates – relatives of monkeys, apes and ourselves. They are more distantly related to us than monkeys and apes are; in many ways they are similar to the lemurs of Madagascar. They are closely related to the pottos and angwantibos of Africa and the lorises of Asia (about which I also hope to write something soon). They are not particularly closely related to the tarsiers of southeast Asia, which are superficially similar. Bushbabies are restricted to sub-Saharan Africa, but they are diverse here with almost twenty species recognized. In South Africa two species occur – this one and the Greater Bushbaby, Otolemur crassicaudatus, which I’ve been fortunate enough to have in my garden once! In South Africa we therefore call this species the Lesser Bushbaby to distinguish it from the bigger one.


The greater bushbaby is about the size of a small cat, but the lesser is very much smaller, with a bodyweight of 100-245 grams (about 3 to 8 ounces). Its tiny body supports a relatively large head and a long, fluffy tail. Galagos are nocturnal, and their huge eyes help them see better in the dim light; hearing is also important to them, as their huge ears show. These can be folded up for protection, for instance when galagos are retreating into the small, stuffy holes they use during daytime. Bushbaby arms are fairly short and stubby but its legs are very long, as are its feet. Those long legs are used to propel it with prodigious leaps! In my painting the legs are folded in under the body; this is the usual limb attitude, the legs only being fully extended while leaping. Bushbabies have long fingers and toes with bulbous tips, to help them climb and grab insect prey. They urinate on their hands and feet, not only to make them sticky to help them climb better, but also to scent-mark themselves and their territory. The fingers and toes have flat nails except that on the first toe next to the big toe there is a pointed claw used for grooming the fur. Another grooming adaptation is a ‘comb’ of narrow, forward-pointing teeth in the galago’s lower jaw. And weirdest of all, they have ‘double’ tongues: on the underside of the tongue there is a second tongue-like projection called a denticle, which also has a margin of ‘teeth’ with which the tooth comb is cleaned.

The lesser bushbaby occurs in open woodland or savannah country, which is grassland dotted with trees. It is adapted for climbing and very vulnerable on the ground, and therefore doesn’t like coming down from the trees. But in savannah the trees are widely spaced, with open areas of grass in between them. This is where the bushbaby’s leaping ability comes in handy. It can clear up to 6m/20’ in a single jump! But in the savannah trees can often be further from each other than this. But the bushbabies usually manage to find and map out routes defined by trees that are close enough to each other that they can leap from one to the other and so cover their territories without having to descend.


The leaping ability of a bushbaby is also a very good escape measure. When a predator approaches the bushbaby can very rapidly leap away, in almost any direction, making it very hard to pursue. Its small size and grasping hands and feet means it can leap onto thin branches and twigs that would not even support a wildcat. The leaping style of a bushbaby is basically bipedal: it tucks its little arms in close to its chest and then launches off using its spring-loaded hind legs. Its tail is used as a stabilizer and for fine-tuning its body orientation. In mid-leap it brings its hind legs forward so that it lands feet-first as well; it can then immediately leap off again, or grab on with its hands if it is in the place it wants to be. On the ground this species also prefers to move about by leaping on its hind legs, while the greater bushbaby instead usually walks on all fours.


Bushbabies are omnivorous but have a preferred food: tree gum! In the savannahs of South Africa there are several tree species that exude sweet gums from injuries to the bark and living wood, most specifically species of Acacia and Combretum. The sweetest gum belongs to the Sweet Thorn, Acacia karroo. In the bush you can easily find this … almost every tree will have ‘stalactites’ of congealed gum hanging from the branches and trunk. Damage by insects and browsing mammals cause this gum to drip out and congeal into a hard rubbery to crunchy substance, closing and protecting the wounds. You can break a piece off and chew it; it is sweet and pleasant tasting, but so gummy that if you have a very big piece it will stick your teeth together so that you have to exert a lot of jaw effort to get them unstuck again!


What bushbabies do is to nibble at the bark with their sharp front teeth. This will cause the gum to start leaking out, which they can then lick up. They can return later to trees to collect exuded gum and to re-open these ‘wounds’. Tree gum is fairly indigestible to other creatures but galagos are able to digest and extract the sugars present in it, and this fuels these little leapers’ high-energy lifestyles.


Apart from tree gum lesser bushbabies also eat insects and other invertebrates, using their quick leaps and dexterous hands to catch them. On occasion they will eat fruit also.


Interestingly, the bushbabies inhabiting dry savannahs and woodlands breed more frequently than those inhabiting moist, lush rainforests. This might be because in the more open habitats they are more vulnerable to predators. They can be caught by owls at night, or at their nest holes by monkeys and carnivores. So, more frequent breeding can offset babies that are lost. There are two breeding periods, the first in Spring and the second in late Summer. One or two, only rarely three, babies are born, in a tree hole or nest. If tree holes are unavailable bushbabies may take over birds’ nests, or build their own. The mother takes care of the babies; she has two pairs of nipples to suckle them, unlike monkeys and apes (and us) who have only one pair. She might take them out of the nest and ‘park’ them clinging to a branch during her periods of foraging for food; she also carries them in her mouth when she wants to move them greater distances. They mature quickly; siblings often play-fight and wrestle with each other. They may stay with their mother for some time, forming small family groups that share a nest and accompany each other on foraging excursions.


At the moment this is a widespread and abundant species. It occurs from the northern parts of South Africa into Zimbabwe, Botswana, northern Namibia, and from there northward to the southern fringes of the Congo Rainforest belt, and eastward as far north as Uganda and Kenya. Over this range it inhabits a variety of savannah and open woodland types, dominated by trees such as thorn (Acacia), bushwillow (Combretum), Miombo (Brachystegia) or Mopane (Colophospermum). In the rest of sub-Saharan Africa several other species occur, some also living in savannah or dry woodlands but most living in moist rainforests. The different species look fairly similar but are distinguished by different calls, diets, behavior and other details. The cat-sized greater bushbaby is the biggest species, while the dwarf galago, Galagoides demidoff, isn’t much larger than a mouse, with an average weight of 60 g/2 ounces.


I have been fortunate to see lesser bushbabies in the wild on a few occasions. The best time is at dusk; they emerge at that time, staying around their nests for a while before moving out. In the fading light you will have a few minutes in which to get a good look at them. At night they can sometimes be seen using a flashlight, which will show their eye-shine. They will typically look at the light for a short while and then jump away, turn their head to look at the light again, and move like that for a while, a pattern of motion shared by no other animal. If you’re lucky you might succeed in getting close enough for a good view. Bushbabies can also be caught during the day-time at their nests; they are very groggy and sluggish when first woken up, but after a while become more lively and might bite you in self-defense. People often catch them and try to keep them as house pets, but this is a bad idea. They get their urine on everything and also don’t really become tame. So, these charming little primates are indeed best enjoyed in nature.