Some time ago, a Researcher at a Meet mentioned that they thought a French Meet would be nice. They repeated this several times, at which point someone took it upon themselves to organise one.

As a direct result of this Researcher 's insistence (haha, no blaming 2legs, this time!!), eight hitchhikers gathered in Reims for a week-end of visiting, drinking and eating local delicacies, and chatting the night away.

Where was that again?

When did you say it happened?

Who on earth would be crazy enough to do that kind of thing?

Several others had expressed an interest, but either changed their minds, or found out later on that they were not available.

So what *exactly* are we talking about here?

The first Researcher to arrive was Wand'rin Star. Her train arrived at Reims TGV station on the Thursday night. SuperFrenchie picked her up and drove her to her hotel, where the owner proceeded to point out, on a map, all the interesting restaurants and cafés in the town centre. Our two Researchers being in search of food, the hotelier's information was crucial. They opted for a little restaurant slightly off the centre of town, where they had delicious fish with sauerkraut. The evening ended shortly afterwards, as it had been a long day.

On the Friday morning, SuperFrenchie went to work and the Star... Wand'red around the town centre.

MMF was next to arrive and, meeting up with SuperFrenchie and Wandrin Star, waited for the others to arrive. And they did, in the form of TC, Loftskywalker, TRiG, and Beatrice (and Flat Abby!). By that time, everyone was sitting outside the Sherlock Pub, self-appointed English Pub, complete with Union flags, Guinness signs, and waiters in kilts. (No, there wasn't any symbol for Wales, which they all deplored.)

After an apéritif, some picture-taking and present-exchanging, they headed to Latino Café for dinner.

Later on, they returned to the Sherlock, as they had seen the "Velvet Froggies" were giving a gig there. There they sat around with their drinks, listening to the music, and were joined by DragonQueen, who had just arrived on the last train.

The Saturday started with brunch, where they were supposed to be joined by several members of SuperFrenchie's English-speaking group. Only one of them turned up, but it was still very enjoyable for all.

The brunch consisted of :


They ate and drank and were merry, until they remembered that the time for the next item on the list of Things To Do was approaching. Some wandered around the town centre while others returned to their hotel to drop items off, before all meeting at the car park.

By 2:20, they had all arrived at the renowned Taittinger Champagne house (either driven by SuperFrenchie, or by her English-speaking friend), and the visit started. A short film was shown, followed by a descent into the bowels of the ancient Roman chalk quarries, now used as cellars for the wine. The tour was conducted by a young English lady.

After the cellars came the most important part of the visit : Tasting. Each was served a glass of champagne, which they promptly drank in case anyone tried to snatch it from their hands, while SuperFrenchie's English-speaking friend kindly took a group photo, including Flat Abby (who didn’t drink). 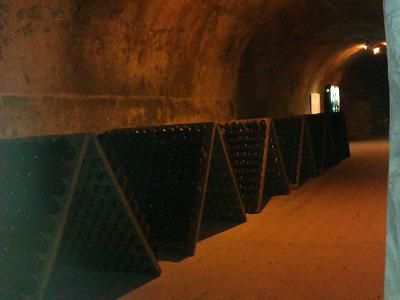 After having one last look around the "tasting" room, they all headed back to the cars, and on to the Cathedral.

On arrival, they went to Palais du Tau, the former Archbishop's Palace, which is now a museum containing the original statues from the Cathedral (these having been replaced by copies around the 1960s), as well as former Kings' jewels and coronation cloaks. This is where they all split up in tiny groups, as some were quicker than others to go around the museum.

Eventually though, everyone made their way to the Cathedral and had a brisk look around before it closed, including Chagall's windows, and the Anniversary windows (commissioned for the 800th, a few years ago); while MMF waited at a café for their return. 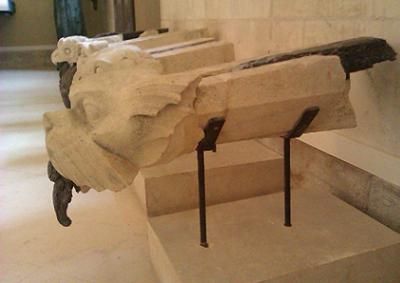 From there they retired to L’Apostrophe for a leisurely evening of good food, drink and friendly banter.

Now came the time for the highLIGHT of the week-end : Rêve de Couleurs ("dreaming of colours"), a lightshow on the facade of the Cathedral. So back they walked, all the way up the street to the cathedral. They were all quite impressed by the show, which featured, among other things, a reconstruction of how the statues used to be painted in bright colours.

A video of the show can be found here.

After a nightcap, everyone went their separate way.

The Sunday was spent in the same way as pretty much all post-Meet Sundays : sitting around, having a drink, then having some food, then having one more drink; until, one by one, most Researchers left to catch their trains home. Some (Wand'rin Star, TC) had left on an early train. 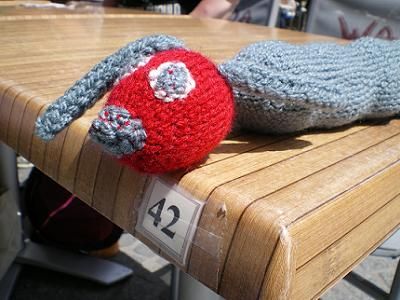 By evening, only TRiG, DragonQueen and SuperFrenchie remained and, once more, found themselves sat at a table together, with more food and drink.

DragonQueen left early on the Monday morning, but TRiG and SuperFrenchie had agreed to have breakfast together, which they did.

They then spent half of the afternoon visiting the Surrender Museum (where the end of World War Two was signed on May 7th 1945) ; and the other half eating ice cream in a restaurant that had air conditionning.

TRiG's train departed shortly after, and the Meet was over for good (until next time).

Apart from the Thursday, the weather was absolutely gorgeous all week-end, so gorgeous in fact, that most of the weekend was spent outdoors, dining and drinking al-fresco, and several Researchers sustained sunburn on the Sunday.

All researchers commented on how good a week-end it was, and how well planned.