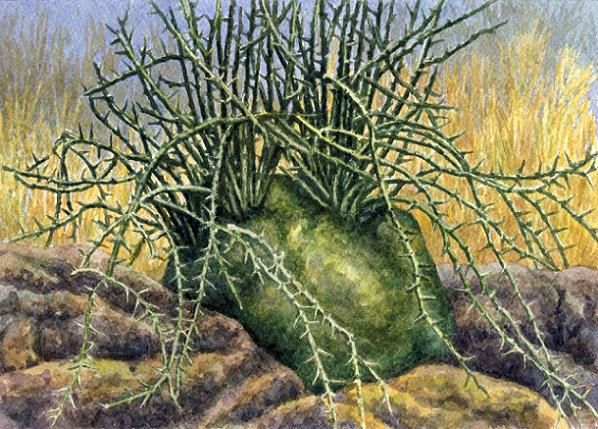 As a change from all the pretty flowers I've featured recently, I bring to you today a truly weird, even grotesque, plant. This is the Spiny Baboon's Poison, Adenia spinosa. This is something very few South Africans have even seen … I saw it first ten or so years ago, at which point I was already seriously into plants, and when I encountered it I had no idea that such a thing existed!


To stumble upon this in the bush can be an unsettling experience, if you didn't previously know that such things can be. The species grows in only a small region around the Limpopo River, in the far north of South Africa and the south of Zimbabwe. The first time I saw it was when we were visiting a small nature reserve not far from the town of Messina (now Musina). At the reception of the reserve there was a poster showing this species … it was news to me. I had heard of the genus Adenia before but didn't know the plant looked like that. So with our friends we went on a hike one day specifically to view them. We found them growing in dry bush amidst other interesting plants such as Baobab trees and others. They were not very conspicuous, with the other bushes and grasses growing around and over them, but we did find them and they were amazing. This plant forms a huge basal mound from which long, spiny tendrils emerge. The basal mound in botanical parlance is called a caudex, and this species forms a caudex like no others. The caudex can exceed a meter and a half in diameter, but typically doesn't grow very tall. Those we saw rarely exceeded half a meter in height – at least the caudex part of them. So they have these huge, green, broad mounds, with the long tendrils growing out of their tops. The tendrils can climb up into surrounding bushes and trees, reaching a height of over three meters. But if there is no surrounding support, they grow upwards until they start drooping down again, spreading outwards around the caudex and often hiding it in a spiny tangle.


These plants when I first saw them looked to me like the buried heads of giant gorgons. If you recall your Greek mythology, the gorgon Medusa had snakes for hair and eyes that could petrify her victims. Her eyes still retained their lethal power even after she was decapitated by Perseus. So luckily for us these 'gorgon heads' were buried up to above the eyebrows, only their tops sticking out, with their snake-like masses of tendrils.


After returning from the reserve I of course immediately had to find out just what the heck this plant was. As I've said I had heard of the genus Adenia before. It turns out that this is a member of the Passion Flower family! Which is quite incredible. We had passion flowers in our garden; they are scrambling vines with luxuriant leaves, beautiful flowers and very tasty fruit, originally growing in moist tropical forests. Our weird 'gorgon heads' grew in very hot and dry country and looked totally different. But in the plant kingdom highly different species can indeed be closely related, because plants are remarkable for how rapidly and radically they can change their growth forms to adapt to different environments. In the case of the spiny baboon's poison, the massive caudex is an excellent storage organ for water and nutritional reserves in a region that experiences very long and dry winters. The spines on the tendrils are for protection against browsers. While passion flowers have large and luxurious leaves, the spiny baboon's poison has small, rather inconsequential leaves, and these fall off during the dry season. So the plant carries out much of its photosynthesis through the green bark of the caudex as well as the green tendrils. These parts lose water much more slowly than the thin leaves do, thus helping it more to conserve water.


The genus Adenia turns out to contain about twelve species and forms growing in South Africa, and since then I've managed to grow several of them. Interesting is that this single genus alone contains a great variety of growth forms. One of the most frequently encountered is the Common Baboon's Poison, Adenia digitata. This, on first inspection, looks much closer to the regular garden passion flowers. In the wild there is no caudex evident, only the trailing, spineless vines bearing large, divided leaves somewhat reminiscent of passion flowers. These vines bear yellow, greenish or creamy flowers, smaller and narrower than those of passion flowers, followed by conspicuous orange-red fruit, about an inch in diameter, that have thin rinds and split open to reveal the seeds coated in thin, reddish flesh. The fruit look inviting but are indeed poisonous – and not just to baboons. It happens in rural areas that children eat them and sometimes die. Which should not happen, since the species is very easy to recognize for what it is. But at any rate: while the common baboon's poison doesn't appear to have a caudex, in fact it has the equivalent – only, it succeeds in hiding it well! If you dig open the base of the vines you'll find a very thick underground tuber. This is in fact a subterranean stem, anatomically exactly the same thing as the huge caudex of the spiny baboon's poison. In this species, the caudex, being buried, is better protected against cold and damage by animals, and the vines die back each winter and re-sprout from the tuber each spring. In the spiny baboon's poison the spines offer protection against animals, and it grows in areas where the winters are much warmer, and thus can keep its caudex above-ground.


Other species of Adenia growing in thickets, woodlands or forests also have above-ground caudices. In South Africa only this one species is spiny, but there are other spiny species in East Africa. There are about a hundred recognized species in total. Some of the local species grow in moist forests, where they are thin vines with fairly large leaves, but still show a basal thickening of the stems. All local species are poisonous, but are still used medicinally: as emetics and against depression. Two species in Southern Africa reach tree proportions, with caudices that can exceed two meters in height. The genus also occurs in Madagascar, where there are some additional impressive species. But as far as I can know, the spiny baboon's poison is the fattest of them all. The only reason it cannot be called a tree is because the caudex doesn’t grow tall enough, and typically being much wider than tall, hardly resembles a trunk. 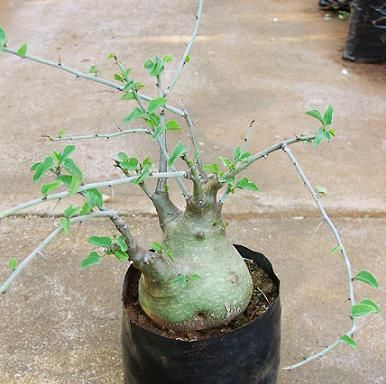 Since learning of this species I've been on a mission to grow it. I've managed to obtain individuals at Kambroo Plants and also seeds from Silverhill Seeds which have germinated well and I have now about thirty little plants! Here is a photo of a small but well-formed specimen, with a caudex still only about 10 cm/4” wide. These plants turn out to fatten up faster than anything I've yet grown other than the Tree Grapes. I've yet to see how they do in open beds … I've planted out a few recently but they've used their first season just for becoming established, so I'll wait for next season to see what they can do. I really hope they will flower and set seed so I could start propagating them. I am certain they could be very popular with succulent collectors and/or rock garden enthusiasts.


If you can get seed of these, they should be planted in a well-draining medium with a bit of compost … say about a fifth to a quarter by volume of the mix. Plant them about a centimeter/half an inch deep, spaced an inch or more apart, and just sprinkle light sand over them. Keep warm and moist but not wet. Germination should be in a week or two. The little plants will quickly thicken their stems; leave them for a season or two before planting out into individual bags. Then grow them for another few seasons – it is best to wait until the caudex is five to six inches in diameter before planting them into open beds. The young plants should be grown in medium to light shade. The caudex in nature is usually shaded by surrounding grass and bushes as well as the mass of its own tendrils. Shaded properly it remains green, which is one of its main attractions; in full sun it blanches to a light grey. This species can grow outside only where there is no frost, or frost so light that it can easily be protected against it. It will do well in a rock garden, wedged between large rocks and with low bushes or succulents around it to shade the caudex, and with a large tree or something else behind it that its tendrils can snake into. It needs enough space to fatten. It also needs a dry climate: intermittent rains in summer, and no rain at all in winter. All in all it is a rather demanding species and I’ve yet to see it grown in any garden other than my own! But I’m hoping to help popularize it here in the far north of South Africa where the climate suits it.