It has only taken a year – but I've finally gotten around to answering Awix's open letter to me. I hope he will be pleased that I have finally taken in the film he recommended. It's my turn to review and wonder at. . .

Jason Statham and the Gesamtkunstwerk

I example not how an artist can force expression beyond the limits of Art, but how an artist should subject it to the first law of Art – the law of beauty. I apply this observation to the Laocoon and the reason which I seek is clear. The master strove to attain the highest beauty in given circumstances of bodily anguish.   – Gotthold Ephraim Lessing, 'Laocoon', 1766. 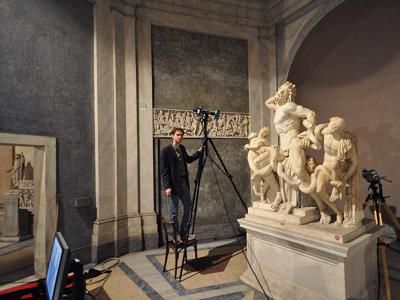 I finally did it – watched Safe. The impetus came from Netflix. I blush to say, however, that it wasn't exactly the allure of your Main Man that drew me in and caused me to put the film on over the vigorous protests of Elektra, who groused, 'You can get lead poisoning just looking at one of those things.' No, I'm afraid it was the director's name.

If I'd looked more closely the first time, I would have realised that I HAD to see a film by Boaz Yakin in my lifetime. I mean, what were his parents thinking? As any true fan of Russell Hoban1 knows, 'Boaz' and 'Jachin' are the two pillars of the Temple. A fitting name, however, for a director/writer so versatile that he creates A Price Above Rubies AND a Jason Statham film. All right, I was prepared to learn something.

I realise, my cineastic friend, that when you review these films, you are concerned with their artistic merit, along with the production values, script, acting expertise, and quality of cinematography. Ignorant as I am, my first question has to be. . . Why?

By which I mean: why do people make films of such unrelenting doom, horror, and mayhem, set in miserable alternate universes even worse than the one we currently inhabit? Why do they make them, and even more puzzling, why do people watch them? I do not voluntarily eat food, for example, that will make me ill for hours afterward. So there must be some virtue in spending 90 minutes watching nameless people being shot, cars being demolished, and gang members threatening innocent children with unspeakable tortures in even more unspeakable accents. But what?

The film Safe began interestingly enough. I loved the out-of-sequence quick-cut introduction to the backstory – first, the child in the New York subway, then 'one hour ago', then 'one year ago', then the story of Our Hero, certainly the most engaging hobo, with or without shotgun, since my beloved Rutger Hauer. Driven to despair by his loss and suffering at the hands of the Russian Mob and New York's Far-from-Finest, Luke Wright (nomen est omen) is distracted from imminent subterranean vehicular suicide only by the obvious greater need of a young Chinese girl, who is being pursued by the same cabal of nemeses, plus an extremely creepy Chinese triad.

Ah, Lessing, thou should'st be living at this hour. This work of art reminds me of the Laocoon – which, in case nobody's made a film of it yet, is a rather horrific statuary group about a man, two boys, and a large water snake. The snake is winning. I still didn't get it, the why? of this film, until the scene in the subway car. Then the light dawned:

I was watching an opera. Not just an opera: A Gesamtkunstwerk, im wagnerschen Sinne.

Opera is loud, often. It is oversimplified. It eschews complex dialogue. Hell, it eschews acting. The greatest singers are often unable to react visually while performing musically – they're almost as poor at this as Mr Statham himself, who is acted into a corner by 12-year-old Catherine ('Happiness for you?') Chan. Opera is OTT – this is its raison d'être. Plots, such as they are, violent, insane, extravagantly absurd, are there to provide the opportunity for virtuoso caterwauling.

Compare the exquisitely choreographed mayhem of Safe's subway scene with the finely-wrought warrior cries of the great Kirsten Flagstad. (No, she did not star in Kenneth Branagh's Thor2.) For best listening, skip to 1:30. That's when you realise that all the outrageous costuming and elaborately meaningless plot about rings, supernatural spear-chucking maidens, and such, is just to get to the emoting.

Can you doubt that this armed jane means business? Don't let those high notes fool you. The song's called 'The vengeance of hell seethes in my heart'. I'm sure JS could get where she's coming from.

So what am I saying? That Safe is high art? It certainly has in common with high art that it eschews bourgeoisification. Rather than stoop to such paltry dodges as 'realism' and 'plausibility', this ballet of ultraviolence throws common sense to the winds as it races through the streets of Philadelphia (yes, we know it's set in New York, but we recognise Broad Street when we see it), whipping itself into a state of artistic frenzy.

The meaning lies not in the terse, banal dialogue – lines such as you quoted:

Don't lose any sleep. He wasn't a nice person.

No, my friend. The emotional truth of this film is to be found inside the seemingly endless fight sequences which constitute the real arias of this opera. As Kirsten Flagstad thrills with her piercing 'Ho-yo-to-ho', so does Statham with his lunge at his enemy's throat in the Russian bar. Like chorus members, the nameless extras serve to support the Heldentenor as they fall, elegantly or gracelessly, to their deaths in a sea of carnage worthy of the Götterdämmerung itself. Ah, wondrous world, that hath such artists in it!

In short, dear Awix, I thank you for this introduction to a truly inspiring art genre: the dystopian opera of urban pain. Truly Boaz Yakin has striven, in the words of Lessing, ' to attain the highest beauty in given circumstances of bodily anguish.' Even if Elektra insists that the 'bodily anguish' is her own.

We might watch another Statham movie someday, if I can handcuff Elektra to the sofa.

Fact and Fiction by Dmitri Gheorgheni

1He's a novelist, Awix. You wouldn't. . . wait! Didn't somebody film Turtle Diary once? I'm still waiting for the filming of Riddley Walker. I think JS is too old for the part, though.2To the public: for Awix's better review, read Hammer Time.