The toddler's Guide is written by Solnushka's eighteen-month-old daughter, who is generally accompanied on her travels by her Mama and her Big Brother, who is four and a half. She wishes everyone to know that the spelling is Mama's.

Every now and again Mama realises that there are places to go in London which do not involve animals1. One of those places is the RAF Museum London, which turns out to be full of planes

It also has a car park. Mama gets oddly excited about this. In fact I think that if she found out somewhere has a car park she would visit it no matter what it contained. Unless she needed lots of those shiny metal things of course. The car park at the RAF Museum is not free, but neither does it require lots of slightly yellowish shapes, and the RAF Museum itself is free, so that is why one Sunday morning we were braving the centre of London by car in order to get there and meet Mama's BFF and her children. If you have to travel across London by car, Sunday morning is the time to do it. 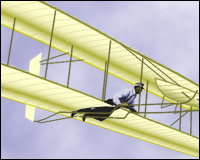 Hanger one is the older flying contraptions. You can walk around the gallery at the top and observe the ones suspended from the ceiling. They have these REALLY AMAZING interactive touch screen information points, which I could play with forever2.

Yes, there is a design flaw. You have to be at least my Superlative Big Brother's height to be able to reach them, although he was mostly more interested in following the Really Cool Even Bigger Girl around. Agist, I call it, but they did have stairs for me to make my way down while Mama's attention was occupied elsewhere. So the day was saved.

The ground floor allows you to get up close and personal with the plane undercarriages. Not that up close, though, as they are guarded by rope barriers. Someone really needs to do something about them. They seem to keep out the adults well enough but they are very easy for two todders to climb over or slide under. Us smallest people had a lot of fun flaunting our amazing ability by cavorting just out of grabbing reach underneath the planes. Even my Superlative Big Brother joined in. He got told off by a Museum guard for touching. This happens a lot I find. We wee girls just got strapped into our pushchairs and fed. Result! While I chewed the older people discussed their favourite plane. The consensus of opinion was that they liked the one with the checked looking pattern in purple and green. Because it was pretty.

Then we went into a new hanger. The planes here were much bigger and rather less colourful. Even the Mamas seemed overawed by the sheer hugeness of some of them. I mean, if you think space is big, you should see the size of some of these metal tubes with wings on. There was also plenty of room to run about, so it wasn't necessary to hurdle the barriers too often, and the Mamas even found us a corner where you could climb on a whole bunch of child sized cockpits and pretend to drive.

There were also some tables, so we had more food and my Mama discovered that the nearby café will allow you to bring over some coffee as long as you ask for it in a takeaway cup. This made her happy, although she seemed a bit disappointed that neither me nor my Superlative Big Brother came up to a line on the wall next to a large box which kept flinging itself around every time someone gave it some of the round metal things. Mama says it is a flight simulator, whatever that is, and she is clearly determined that one of us will want to have a go on it someday. I am not so sure.

We played with the toys for a bit more, and then I fell out of an aeroplane onto my head and my Superlative Big Brother decided he wanted to see more planes rather than watch me cry, so Mama strapped me into the sling for comfort and off we set round more large and not so large flying machines. My Mama liked the varnished wooden one that looked like it should be a boat, the other Mama liked the huge plane you could sit under and admire its raked back wings, and the rest of us liked the shop, which is cunningly situated near the exit. Mama says this is typical.

The only other thing worth mentioning that we visited is the 3D cinema room. This involves glasses, but I don't know how. They taste funny. And the screen is all fuzzy. There is, the Mamas think, another hanger somewhere with yet more planes, but we were bundled back into the cars without seeing it. To be honest, it was a bit of a relief as I was well over due for a nap and zzzzzzzzzzzzzzzzzzzzzzzzzzzzzzzz.

Anyway. RAF London. An excellent place to take the smalls on a Sunday when it's raining. Mama says. It's certainly not as busy, in the autumn at least, as the big central London museums, but there is just as much floor space to get some much needed exercise. And a bunch of grounded aircraft are a lot more interesting than you might think. Mama says.