We’re fools whether we dance or not, so we may as well dance – Japanese proverb

I’ve been having painful empty nest moments ever since my daughter moved to London last month, to take up a place on the degree course at London Contemporary Dance School. The final offer was made at the 11th hour, so there was quite a bit of mad dashing around, trying to find accommodation using available websites, but also arranging to fly over to view some likely flats and apartments during August. While the Olympics was on. As it turned out, this was less stressful that I had imagined, and travelling about in the city was fairly hassle-free.

I’ve taught her well – armed with a notebook, a Tube-map and a camera, she dutifully noted down all the important features about each place, including how long it would take to commute to her classes. She saw some really grotty places, with dead flies gathering on the floor, and others where bizarrely all the windows had been bricked up. But she did find one that she really liked, in a new apartment block in Lewisham. It was just about within budget, a very pleasant environment, even though I had concerns about that area of the city, but the transport links were excellent, and being in Zone 2 also somewhat cheaper than some of the alternatives. She and the boyfriend loaded up all their worldly possessions (including Edgar the hampster) into his car, and set off to catch the overnight boat to Liverpool.

I only discovered at a later stage that they’d had a nightmare moment getting off the ferry next morning, when a jolt sprang open Edgar’s cage, and he disappeared, somehow getting into the skin of the car. He popped out from behind the light fittings above the rear view mirror, then disappeared. This was all happening as they were being ushered off the boat, so they had to find the nearest stopping place and unload the car to try to find the escapee. Luckily enough, as they opened the boot, there he was sitting, and they were able to make a grab for him and secure him back in his cage.

Fast forward a few weeks: Jem had survived fresher’s week and was enjoying her classes so far, and had learned that the 50 first year students had been chosen from a total of 1,600 who had auditioned. Matty had found himself an internship for his dream job as a record producer, and I was over in London for a charity ball to celebrate the 10th anniversary of the Gambia Horse and Donkey Trust. My son Harry had been working flat out all summer what with those Olympics and other events needing roadies and backstage crew, but he was also free to join us for lunch.

And so at 12 o’clock on a sunny Saturday, I was able to Facebook “check-in” at Lewisham railway station with both my children! 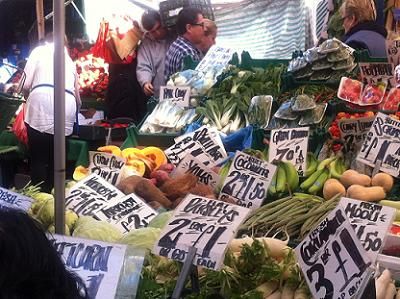 Lots of hugs and smiles, and then we strolled down Lewisham High Street to the apartment, with Jem pointing out all the local spots of interest on the way – there’s the library where they gave her funny looks for wanting to use the photocopier, there’s the street market selling loads of fresh fruit and vegetables at “A pahnd a bowl!”, and there’s the pub where they operate a stock-market sales technique , so that the prices of individual drinks go up or down according to demand. 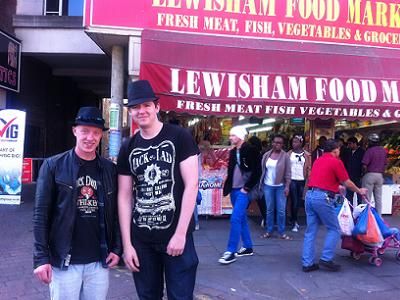 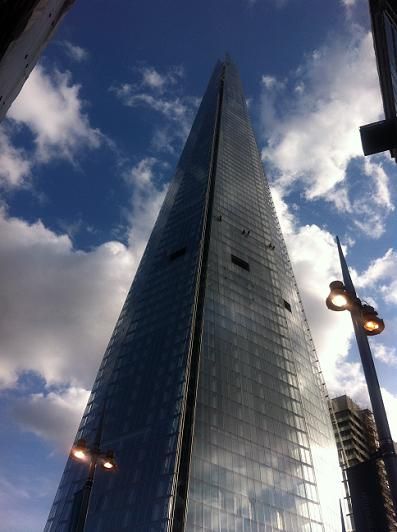 The flat was tiny, but fresh and clean, with lovely picture widows, and a very glam communal roof-top terrace, with landmark buildings The Shard and The Gherkin both visible on the horizon. Our merry quartet repaired to the nearest Wetherspoons for lunch, and Harry took great delight in taking one of my Norn Irn banknotes to argue with the bar staff over whether or not it was legal tender. 1 Suitably fed and watered, we continued our wander past the street market stalls, buying matching pork-pie hats for the 2 chaps, since they were already wearing matching Jack Daniels T-shirts.

Back at the station, Harry and I made our return journey into London Bridge, where I was delighted to discover The Shard close up, and took some photographs of the bravest window cleaners in the land, doing what must surely be a full time job. I’d missed going to Jem’s prize day since she was already in London at that stage, and so I was trying to persuade Harry that I HAVE to come to his graduation in November. But he’s pretty certain he’ll be on tour with a rock band that day. Or in rehearsals for panto, or some such. Hmmm, I shall continue with my motherly means of persuasion, commonly known as bribery.

Anyway, hopefully it won’t be too long before I can visit again – maybe one of them will even be in the West End before then! 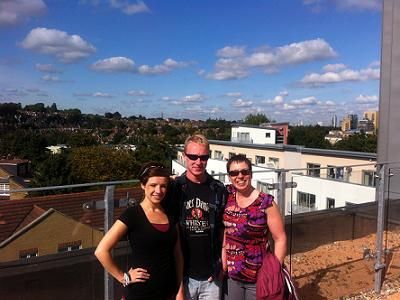 Murder on the Dance Floor Archive

1 It is, but persuading London shopkeepers of this fact can be a vociferous and bloody battle, which Harry quite enjoys.