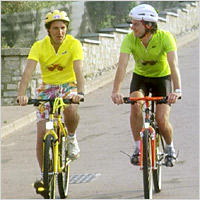 Well, those creative peeps over at Create did it again (looks at Nosebagbadger): they found a challenge I can join in.

I learned cycling at a very early age, and I still remember when I got my first own bike: I was seven at the time. Gosh, how proud I was. Nobody told me then that this would be my means of transpport for most of my future life. We lived in a village, but school, sports club etc were in the town, so either we had to walk or to cycle if we wanted to go somewhere.

When I moved to Kiel to study, I took my bike. Public transport was something I could only afford occasionally, and the distances I had to cover were a lot longer than those I was used to, so walking wasn't really an option.

When I moved to Frankfurt, the distances were again longer, plus traffic was lethal – at least it seemed like this to me, never having lived in a large city before (Kiel is comparatively small).

That put a stop to my cycling activities for a while, but after we moved to another corner of the city, the bike came out again. However, after the birth of my second child cycling became rare for several years.

In fact, I didn't even own a good bike for quite some time. Then two years ago, my mother in law decided that she was too old to cycle and gave me her bike. I cycled occasionally, but I live in a very hilly area, so I didn't cycle a lot – until March last year, when I realised that I was not only too heavy, but not fit at all, either.

My husband cycles to work each day, so I started to cycle some part of his tour with him. At first, that was between eight and ten km per day, but a few months on, and I did two such tours on most days. The winter was dry, so I cycled all through winter and ended up having cycled more than 2,000km in total last year.

Then my husband started saying that I should get a new bike, with more gears etc. I wasn't convinced at first, I had had a bad experience with the brakes on a modern bike. However, when he showed me a bike he'd seen a few weeks ago, I gave my OK for him to order it. Below you can see me on my new bike one of the rare dry and warm days we've had this month. 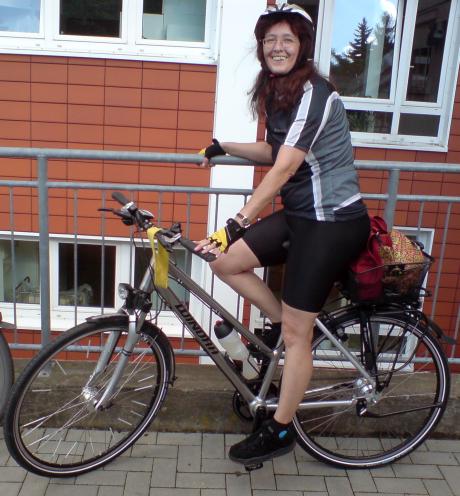 If there is a weather god(ess), they must have decided to make up for the dry and mild winter we had, so they're sending rain, wind and thunderstorms every day. I still cycle on most days, but the thought of having to brake suddenly and hard terrifies me on a dry day already, let alone on a wet day. The brakes on my new bike work so well if pulled hard that I'm not any faster downhill than uphill - I don't dare to go downhill at full speed. My husband laughs at me, but I'm better safe than sorry. I hope I'll get a feeling for the brakes soon, but currently I still have moments where I'm about use my feet for braking (nearly 50 years of having a back-pedal brake do that to you. You can't teach an old dog new tricks etc). Those are the most dangerous moments, and those where I'm most likely to panic and consequently pull the brakes too hard... On the whole, though, I'd recommend cycling as a fantastic way of doing something beneficiary for your health. If I manage to stay away from the chocolate it may even be good for my waist line, too.