Willem is a wildlife artist based in South Africa. He says "My aim is simply to express the beauty and wonder that is in Nature, and to heighten people's appreciation of plants, animals and the wilderness. Not everything I paint is African! Though I've never been there, I'm also fascinated by Asia and I've done paintings of Asian rhinos and birds as well. I may in future do some of European, Australian and American species too. I'm fascinated by wild things from all over the world! I mainly paint in watercolours ... but actually many media including 'digital' paintings with the computer!" 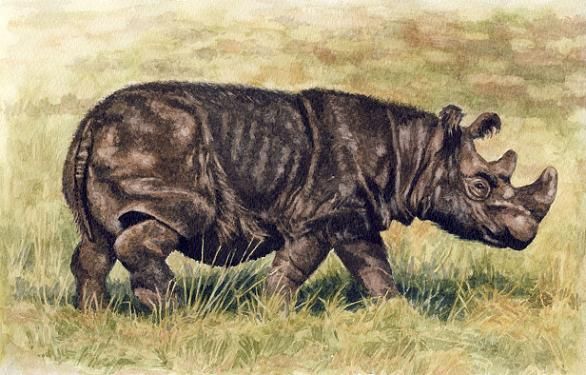 This is a watercolour painting of a Sumatran Rhino, Dicerorhinus sumatrensis. This is the second rarest rhino species in the world, after the Javan Rhinoceros. It is also the smallest rhino species (though still a very big mammal), the hairiest, and the noisiest. I'm indebted to the 'net for most of the info in this article, since the books I have at home deal mainly with the African rhinos.


Though called 'Sumatran', this rhino occurs not only on the large Indonesian island of Sumatra, but also on Borneo and on the Malay Penninsula. In the past it ranged much wider into Asia, in Thailand, Burma, India, Bhutan, up to the foothills of the Himalaya mountains, and even into southwestern China. This is a rainforest and swamp–dwelling species, in need of cover, lots of water and mud. Their coats of shaggy reddish–brown hair allows them to live in colder regions than other rhinos, such as cloud forests. Their current strongholds are in regions of mountain forests that are hard to access either by loggers or by poachers.


Sumatran rhinos, unlike the other Asian rhinos, but like the two African species, have two horns, the front one usually the biggest. The horns are thick and blunt, and usually not very long. The record length for the front horn is over 80 cm/32", but more typically it is only 10–25 cm/4–10" long, while the rear horn is merely a bump. The horns are still very sought after, and poaching is the reason why this is now such a rare species, with as little as 200 animals perhaps surviving in the wild. It is rare in captivity, but there are some specimens in zoos. Breeding them in captivity has proved to be enormously difficult, and so far does not seem to be viable for perpetuating the species.


This rhino has a strange mix of features. The two nose horns are reminiscent of the two African rhinoceros species, although they are probably not close relatives. The skin folds on the neck and around the legs are similar to those of the other Asian rhinos. Also it has sharp tusks, that is to say incisor or front teeth, in its lower jaw, similar to the other Asian species. In size, it is smaller than the African black rhino, rarely standing much more than 1.2 m/4 ft at the shoulder, and typically weighing 700–800 kg/1500–1750 lbs. An exceptional specimen of 2000 kg/4 400 lbs has been recorded according to Wikipedia, but this seems rather dubious to me.


(Relatively) small, solitary, secretive, skulking around in dense forests … this rhino is very hard to observe and study. To a degree this is probably why there are still any of them left at all. Nevertheless this species is better known than the even rarer Javan rhino.
Bull rhinos keep large territories, up to 50 square kilometers/20 square miles. They do not seem to fight each other, but mark off their territories with visible and olfactory indications of their presence such as bending and twisting saplings, defecating in piles, spraying urine, and making scrapes in the ground with their feet. Females have smaller territories, in the order of 10–15 square kilometers/ 4–6 square miles. They move around a lot during the night and eat when it is cool, mostly just before dawn or after dusk, wallowing in mud during the hottest part of the day. They also move up and down mountain slopes with the seasons, spending hotter periods at cooler, higher altitudes.


Mud wallowing in this species seems to be very important. They are choosy and will not use a single wallow over and over again, thus needing multiple wallowing points in their territories. They will use their feet and horns to dig mud holes if natural ones are not available. The mud covering them in nature often obscures their shaggy coats. Actually the hairs may help more mud stick to their bodies. Mud is vital for keeping their skin and toenails parasite–free and in good condition. A wild rhino will wallow for two to five hours per day; in captivity they typically wallow less, but it is still vital to provide them with plenty of mud and water.


Like African black rhinos, Sumatran rhinos have pointed snouts with hooked, mobile front lips. They use this to pluck leaves and fruits of trees and shrubs. They will push over saplings to get at the leaves and succulent young twigs. They eat from a large variety of different trees, bamboos and shrubs and will frequently change their diet and go to new areas to feed. They also make use of salt licks.


A very unusual feature of the Sumatran rhino is its vocalizations. These are even likened to songs. There are three elements to these, termed 'eeps', 'whales' (reminiscent of humpback whale songs) and 'whistleblows'. The rhinos seem to be almost constantly making these noises in the wild, even while they're feeding. The sounds carry very far, and it is still not clear what they are for.


These big mammals stomping through the forest create conspicuous trails. These are sometimes shared by elephants. Smaller animals will make use of these trails as well to enable them to get around these dense forests. Sometimes rhino trails will cross rivers, even big ones: they are strong swimmers (they've even been known to swim in the ocean). They are also surprisingly agile and nimble, able to climb quite steep slopes. They are so adept at skulking that even staking out a known rhino trail for weeks might not reward one with an actual glimpse of an animal.


Tigers are the only predators likely to pose a threat to these rhinos in nature, and then only to calves. But even the calves stay close to their mothers while young, and a tiger would not take on one of these.


We still know little about the reproduction of the Sumatran rhino. Some studies have been conducted in captivity, but few in the wild. We do know breeding happens slowly, a typical female usually taking three to five years between birthing calves. Just one calf at a time is born, after a gestation period of 14–16 months, and weighing 40–60 kg (90–130 lbs). Courtship between the male and female include some rough play, the male bumping the female against the head and genital area with his horns. It seems that inexperienced males can be too rough, sometimes injuring the female. This might be a factor why captive breeding attempts have been so disappointing. In the wild, a female can run away from an overly aggressive suitor, whereas in captivity she cannot.


This species, though very rare and unusual today, has had a large number of relatives that were widespread and common not too long ago. These include the Asian and European rhinoceroses of the genus Stephanorhinus, as well as the woolly rhinos of the genus Coelodonta. These were also two–horned and lived in various habitats from forests to arctic tundra. They were also generally larger than the extant Sumatran rhino. The woolly rhino had similarly reddish fur, but was much shaggier. Evidence seems to indicate that the Sumatran rhino is the sole remnant of an evolutionary lineage that split from those of other rhinos around 25 million years ago. For comparison, the forefathers of rhinos became distinct from those of horses around 50 million years ago, at which time all of them were small, slender–limbed and rather horse–like. More on the evolution of rhinos can be read here: White Rhinoceros. I'll try and get to an article or few about extinct rhinos as well some time.


The hope for this species lies in conserving its natural habitat, and bringing an end to poaching. It is fairly tolerant of different kinds of forest, so human disturbance is not too big a problem, provided there remains some tree cover. As for poaching, rhino horns are still extremely sought after, for a variety of medicinal purposes; other parts of the rhino sometimes as well. Education has to be a part of the solution. Much success has already been achieved in protecting this species, one only hopes that this would continue and prove adequate.