Another day, another miracle.

An Odd Thing Happened on the Way to the Forum. . . 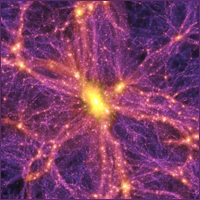 Synchronicity's a funny thing – I mean, it's almost as if the Cosmos has a sense of humour. . .

Sometimes you see or hear of something which seems completely random and totally disconnected from the remainder of your experience – and then minutes, days or decades later you 'just happen to stumble upon' something else which then joins all the dots, or which throws everything into a completely different light.

I joined h2g2 a few months ago and shortly afterwards, as I was taking a 'drunken walk1 through entries in the Guide with the help of the Infinite Impossibility Drive, I saw a reference to something which seemed vaguely familiar – and I suddenly remembered a strange meeting from a few decades ago, whilst I was working in an academic research setting.

Then, last week, there was an documentary on TV looking at an unusual discovery at the beginning of the C20th – a discovery which, again, I realised had a direct link back to that same strange meeting. . .

One morning, back in the '80s, I passed a chap in the college library, flicking through books, as if he was idly looking for something that might be of interest; I guess I noticed him because there was something slightly unusual about his appearance – his face seemed only a little older than most of our post-grads, but his hair was absolutely white.

After I'd gone up and down the same section a couple of times, he came over and asked which book I was looking for.

'Oh, an introduction to the application of Feynman Diagrams to 'Many-Body' theory – I don't have an exact title or author.'

He asked me if I could describe some of the relevant topics and I gave him a brief overview.

His eyes seemed to glaze over a little and I said, 'Don't worry, it's a rather specialist subject, I don't suppose many people will have come across it, unless they have a particular interest in Many-Body theory.'

'No, it's ok', he said, 'I think I've seen something similar recently – I was just trying to remember where I'd seen it' I thanked him and carried on looking myself.

A couple of minutes later he caught up with me and handed me a book: 'A Guide to Feynman Diagrams in the Many-Body Problem' by R.D. Mattuck.

'Well, yes and no. . . ' he replied 'I don't have a need for that particular information at the moment – but it's always useful to know what's available, isn't it?' I thanked him, and took the book over to the library desk.

That lunchtime, as I walked up to the checkout in the refectory, I realised that the person ahead of me in the queue was this same chap from the library.

I didn't recognise him as a member of staff, so I guessed he might be a mature student on one of our distance-learning programs who'd come in to use the library for the day.

I was interested to find out what was his connection with the college – and since the refectory was almost full – I invited him to join me at one of the staff tables by the windows, which I could see still had two places available.

When I could see him in better light than the comparative gloom of the library stacks, I realised that in addition to his hair being a pure silvery-white, his features had a certain Mediterranean look to them.

(Having been born on an island in the Med, myself, I have a 'keen nose' for this sort of thing!)

He said that he'd been given a kind of sabbatical leave from his place of work and he was using the time to catch up on developments in various areas of interest around the globe.

Gradually, as we talked, I could sense the discussion starting to unravel slightly . . . well, 'slightly' is being polite!

He claimed to know for a fact that a particular early civilisation had been extremely advanced technically, much more so than we realised nowadays – and not only that, but there was some indication that they were descended from refugees who had originated in another star system

Whilst he talked, I sensed that he was testing me in some way, gauging how I was taking his 'revelations' – I tried hard to keep a neutral and objective look on my face.

These refugees landed on Mars first, to construct craft capable of surviving entry through Earth's atmosphere.

They started to harvest raw materials from the solar system, by redirecting asteroids into the path of nearby planets and their moons. According to him, they'd been more successful on Mars and the Moon – apparently, there had been one or two ecological disasters on Earth (the creation of the Sahara Desert resulting from one)!

It seems that NASA had 'discovered traces of prior activity on the moon', which was why some of their moon-landing photos had needed 'doctoring'; they'd eventually shared this startling evidence with another space-race contender, who, he claimed, had successfully confirmed it with what still remains a secret expedition of their own. The latter trip, unfortunately, ending in disaster on attempting the departure manoeuvre – hence the clampdown on public revelation of the trip.

I didn't press him on how he managed to be privy to all this information.

I asked him what was his line of work and he said he worked with a group who made high-precision astronomical instruments. When I asked if by this he meant optical devices, he replied that they had started with mechanical instruments, before developing optical-array devices and then graduating to something he called 'FTL2 remote-imaging' applications involving neutrino technology (meaningless 'mumbo-jumbo' to me at the time).

I had the feeling somehow that the work which he was describing covered a very long period of development – much more than just a few generations.

He said that an early example of their work had been found in a wrecked ship, during an impromptu diving expedition at the turn of the then-current century and he seemed quietly amused that, several decades later, academics were still trying to fathom out exactly what it was, how it worked – and more importantly, how it had been created.

As you might imagine, lunchtime flew by – I had a lab period to run – and my 'friend'? well, I guess he had more books to 'flash-read'.

That was the last I saw of this unusual gentleman, although a colleague who had been sitting near us (and getting an Oscar for keeping a straight face) mentioned to me, in the early '90s, that he was sure he had seen our 'friend', unravaged by the effect of intervening years, amongst a photo of delegates at a scientific conference being held in Japan.

The synchronicity? Well, firstly, that early h2g2 article which I'd read was linked to a discussion which referred to a book 'A Guide to Feynman Diagrams in the Many-Body Problem' by R.D. Mattuck – the same one found for me by the mysterious gentleman (MG).

And, yes, I have since bought my own copy of the book as a reminder and a sort of 'thank-you' to the MG for giving me this wonderfully 'off-the-wall' story to tell my grandchildren.

(As an unrelated aside, I can also confirm that the h2g2 Researcher is correct in his insistence that he didn't just plagiarise the introduction for his Guide Entry.)

Secondly, the recent TV programme (dubbed 'The 2000-year-old computer') detailed the recovery of an unusual object from amongst the wreckage of a Roman ship in the Mediterranean Sea, discovered near the island of Antikythera in 1900.

It's believed that the ship may have been carrying treasure back to Rome for display during a triumphal procession.

When first found, it was thought that the object was just an encrusted rock, it was subsequently discovered (using X-ray scanning) to contain a complicated mechanism, with at least 30 sets of finely-toothed gears interlinked between three metal panels and displaying its output on several dials.

From recent reconstructions, it appears that this mechanism is a cranked clockwork-type 'analogue' computer, constructed in brass, which is capable of modelling the relative movements (and astronomical corrections) of the sun, moon and several of the planets, including Mars and Venus, as well as providing astronomical calendars (with built-in compensation for leap-years and an anomaly in the moon's movement), one of them covering a 54-year cycle which can predict certain solar eclipses.

The mechanism is thought to date back to the first or second century BC – the technology and workmanship involved predates any other similar object by around a millennium and a half!

1 A 'drunken walk' – a typically frivolous name (dreamt up, no doubt, by a very sober mathematician who had never, ever, experienced such a journey in RL – honest, officer!) for a serious computing technique which involves a random path through a network of connected locations.2 FTL now understood to refer to Faster-than-light operations, eg. communication – the gentleman didn't elaborate, and I didn't inquire, as to what he meant by this acronym.