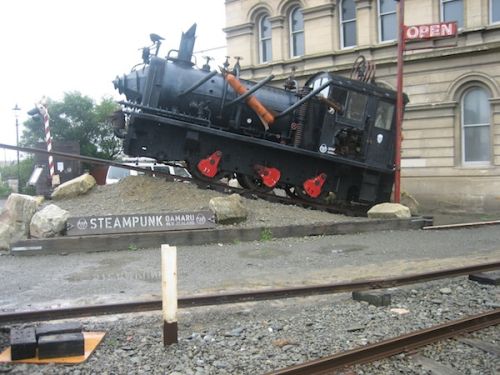 From Clyde we passed through Alexandra, part of that same gold-rush (Cromwell, Clyde , see part
5) in the 1860s. It is at an altitude of some 430m (1,400'), is reckoned the country's warmest town –
and the coldest, too. Summer temperatures average almost 24 °C (75F) while exceeding 30C on
occasion. Winter sees temperatures regularly dropping below 0C.


It is also the driest town, averaging 360mm (14") per year – just escaping classification as semi-
arid. Fruit and wine are its strengths.


From there a long way north-east then a long way south-east on highway 85, commonly called
The Pig Root. Why that name? We have been told, in all seriousness, that the area was
the haunt of a pig rustler and his dog, Root. He, the rustler, was caught and punished but they
never caught Root – who continued the rustling for several years. Unfortunately, that's not easy
to confirm confirm – it seems more likely to be a Scots name as there are quite a few in that
area ...including Clyde.


A short break in Palmerston, where apparently the first Polynesian settlement in NZ was, in about
1300. It seems that the population was centred around this area – there is an early settlement of the
moa-hunter culture nearby, which was re-excavated in the late 1980s, confirming that there had
been a year-round settlement.


From there north, pausing at the Moeraki Boulders and on to Oamaru for the night. 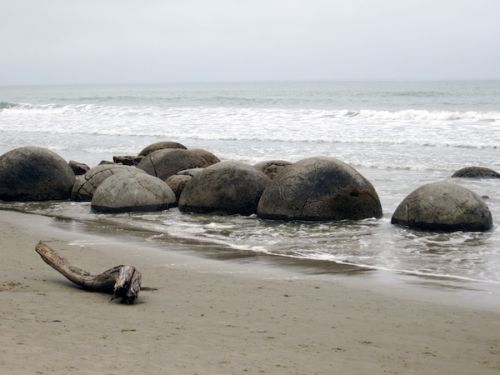 Highway 1 runs through Oamaru, joining Thames Street, which runs north/south – or in our case
south/north. Many, if not most, of the town's roads and streets are named after British rivers – Exe,
Forth, Clyde ... even Coquet and Aln.


Another historic town this, whose old city centre (now the Victorian Heritage Centre) has
many an imposing building of the local white limestone.


The place was built on trade, of course, and it was doing all right, thank you, with exports, including
sheep meat.

Doing all right that is, until that chap had a bright idea and started shipping out mutton – well yes of
course, but now he froze it first – and subsequently the town did even better, thank you very much –
hence the more imposing of those imposing buildings – and warehouses. Most of it went to Britain
in the earlier days.

There's a colony on Waterfront Road, to the south. How on earth these little creatures survived
here seems little short of amazing. The world's smallest penguin, at some 30cm / 1ft tall, they breed
around New Zealand and southern parts of Australia.


It turns out, however, to be not so strange after all – or there again, maybe it is... once the quarry
(for the stone used to build the harbour) was abandoned in the 1970s, the penguins started coming
ashore, unbidden. Nearly twenty years later that area was cleaned up and made more suitable for
them to breed. Conservation of and research into the colony (which employs a scientist) is helped
by tourist viewing.


They come ashore in groups of three, four or up to maybe ten, after sunset so no photography is
allowed for fear of frightening them though they didn't pay much attention to a stand full of tourists,
a loudspeaker and some lighting.


Watching these little creatures scramble up over the edge of a steep, rough slope then make their
way through a fence into their area was an experience rather different to watching nature programs
on TV. Less dramatic perhaps but real - and no less fascinating.


The EQC (EarthQuake Commission) had been busy in our absence. It feels as if half the town
centre is falling down – or waiting to be brought down. There must be an awful lot of businesses on
hard tack, though preparations are under way for shops-in-shipping-containers in a couple of places
– it'll take some imaginative work to challenge Christchurch's efforts.


An odd thing is that parking is near impossible sometimes but the town streets seem only sparsely
occupied.

Seven nights and eight days was it? (can't remember).