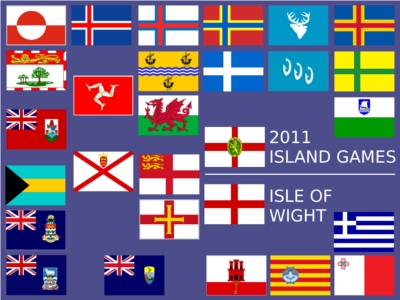 The Island Games is a biannual international sporting event, similar to the Olympic or Commonwealth Games, but on a smaller, more intimate scale. Unlike the larger, more famous sporting games, the entrants represent islands rather than nations. Over 2,000 athletes compete in teams from islands from all around the world, including Canada, the Caribbean, Denmark, Estonia, Finland, Greece, Norway, Spain, Sweden and the United Kingdom. The games involve teams competing in a range of at least a dozen different sports, chosen by the host island.

The London Organising Committee for the Olympic Games 2012 were strongly involved in the 2011 Island Games held on the Isle of Wight, in order to gain invaluable experience in preparation for the 2012 Olympic Games1.

The Island Games was first held on the Isle of Man in 1985. Originally called the Inter-Island Games, the Games were created as the highlight of the Isle of Man's Year of Sport. It had been intended to bring together a number of small islands from different parts of the world in friendly competition. From the start the competition was open to islands across the world, not just parts of the British Isles. At the first Island Games, 15 islands took part.

The Inter-Island Games was such a success that it was decided to hold the now-renamed Island Games again in 1987, this time hosted in Guernsey. Since then the number of participating islands has increased, and 25 islands are members of the International Island Games Association that is in charge of organising the games.

The Hosts of the Island Games have been:

Like the Olympic Games, Gold, Silver and Bronze medals are awarded to the competitors who finish in the top three places.

Islands2 from all around the world have taken part:

As with the Olympics, athletes compete under their island's flag, except for the Isle of Wight, which competes in the games under the Flag of St George of England rather than its own flag5.

1The Isle of Wight has had a long history of hosting international sporting events, including the very first America's Cup and the Schneider Cup. The Island's greatest racing achievement is perhaps the construction of Thrust 2, the world's fastest car and Land Speed Record holder between 1983-1997, which was built on the Isle of Wight.2Some of the competing islands are no longer entirely independent but attached to their mainlands, by bridge or tunnel, either directly or via connections to neighbouring islands. These include Anglesey, Frøya, Hitra and Prince Edward Island. Despite this, they are still allowed to compete.3A skerry is an island too small to be inhabited.4An archipelago is a chain of islands.5The Isle of Wight flag is an Isle of Wight-shaped diamond on a light blue background above dark blue and white waves.