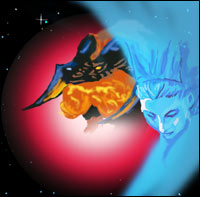 If you are currently playing and have not been added to the list please feel free to give me a kick.

Shairi Timelia A mysterious and beautiful female human assassin, sent to... inhume... certain political targets. Who sent me? That's no business of yours!

Cal Assassin who seems to be uncomfortable with his profession, has strange powers, which he generally keeps hidden, thought not to be human, but no one knows for sure.

Liquid A Tai Sifu, needs no weapons as anything can become a weapon in his hands. A vast experince and knowledge of magic. Protector of the underdog. Respector of all life. He made a mistake in the past, something everyone says is so minor that it doesn't matter. But he is highly crictical of himself and cannot forget it.

Captain Nudge Will offer his services. to all who needs them.